The forensic audit of the 2020 elections in Maricopa County, Arizona is producing unprecedented resistance from the Democratic Party. Now, it has also produced a bombshell: The election officials don’t even have the passwords to the voting machines.

The Arizona state senate called an emergency session on Friday to issue a warning to the stalling Democratic Party that it will not only provide the missing passwords it ‘does not have,’ but also the routers that could ‘allow access to sensitive law enforcement data.’ 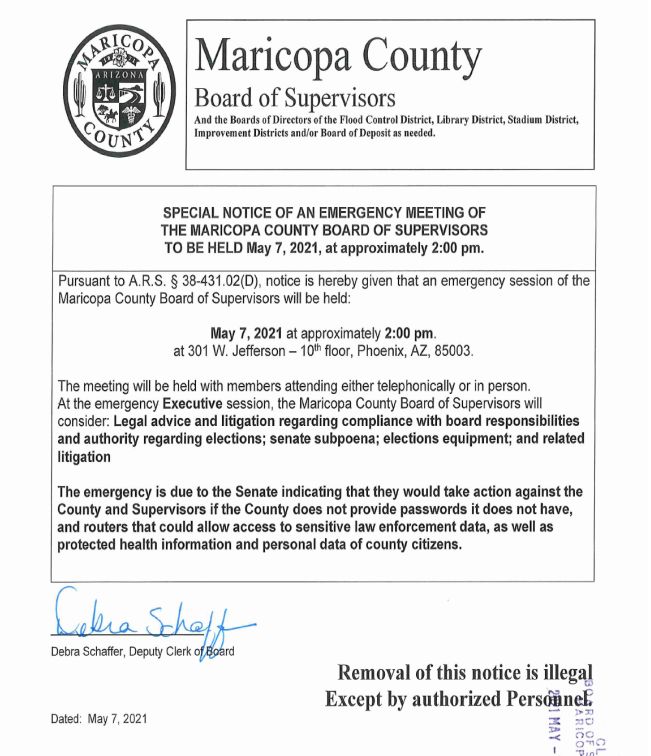 The possibility that Maricopa County did not even have the passwords to the voting machines, while a private company did, would be an egregious abuse of public trust. Furthermore, the refusal to provide the routers demanded by the Arizona state senate raises even more red flags. Just the News reported on the matter on Thursday.

“A Monday letter sent from the Maricopa County Attorney’s Office to Ken Bennett, the former Arizona secretary of state and the liaison between the state Senate and the auditors, said the county had elected not to turn over ‘several routers’ requested by the legislature due to an alleged ‘significant security risk to law enforcement data utilized by the Maricopa County Sheriff’s Office as well as numerous federal agencies’,” the report continued.

“We had previously believed that the risk would be eliminated by redacting the law enforcement data on the routers and not producing it,” Bennett’s letter states. “But we were informed that redaction did not eliminate the risk.”

Bennett told Just the News that the state Senate’s subpoena requested “access or control of all routers and tabulators … used in connection with the administration of the 2020 election” in addition to “the public IP of the [routers].”

The issues with the missing voting machine passwords and the routers are in addition to the stunning development that the auditors are not even permitted to do signature checks, according to a legal settlement with the Arizona Democratic Party.

“After a lengthy lawsuit that saw the Democrats achieve few victories in their goal of stopping the audit of the 2020 ballots in Maricopa County, Arizona, they have reached a settlement with the firm involved in the audit and the Senate Republicans that will see the firm, Cyber Ninjas, cease verifying the signatures on early voting envelopes with the signatures on file from the voter,” the National File reported on Wednesday.

“With only 9 days left to go before the audit is set to be completed, signature verification will cease immediately,” the report continued.

On top of it all, the Biden administration’s Department of Justice sent a letter threatening action against the auditors if they check in person to see if voters’ addresses are correct.

“Past experience with similar investigative efforts around the country has raised concerns that they can be directed at minority voters, which potentially can implicate the anti-intimidation prohibitions of the Voting Rights Act,” the DOJ said. “Such investigative efforts can have a significant intimidating effect on qualified voters that can deter them from seeking to vote in the future.”

The Democratic Party has thus used every weapon and cliched excuse in its arsenal to prevent basic election accountability and transparency regarding the 2020 election. Since Arizona is the only state currently conducting such a forensic audit, it makes one wonder what auditors in other states would find if they only bothered to look.