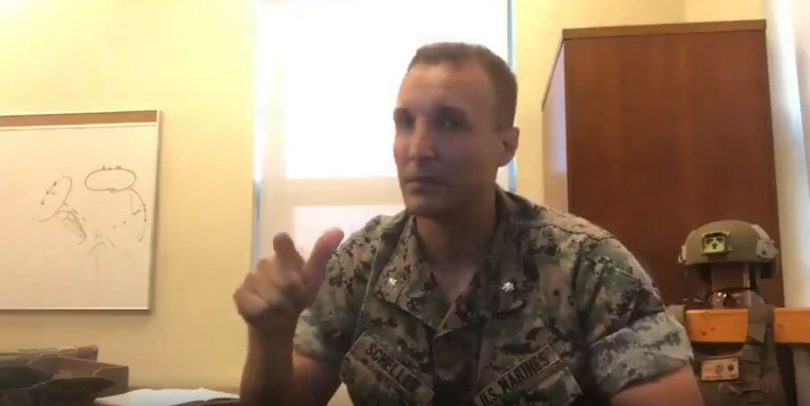 Lt. Col. Stu Scheller pressed for “accountability” from military leadership for the current sitation in Afghanistan. Now, his military career appears to be over.

Scheller unleashed a viral video on social media that put his career on the line to press the top brass for answers.

“People are upset because senior leaders let them down,” Lt. Col. Scheller said. “And none of them are raising their hands and accepting accountability or saying ‘we messed this up.'”

“Did any of you throw your rank on the table and say ‘hey, it’s a bad idea to evacuate Bagram Airfield, a strategic airbase, before we evacuate everyone.’ Did anyone do that?” he added. “And when you didn’t think to do that did anyone raise their hand and say ‘we completely messed this up?'”

“Potentially all those people did die in vain if we don’t have senior leaders that own up and raise their hand and say ‘we did not do this well in the end,'” he continued.

Lt. Col. Scheller later announced that he was relieved of duty for cause.

“My chain of command is doing exactly what I would do … if I were in their shoes,” Scheller continued . “I appreciate the opportunities AITB command provided. To all the news agencies asking for interviews … I will not be making any statements other than what’s on my social platforms until I exit the Marine Corps.”

Lt. Col. Scheller then discussed the flood of responses and friend requests that he got after the viral video.

“The reason people are so upset on social media right now is not because the Marine on the battlefield let someone down,” Scheller said in the viral video. “People are upset because their senior leaders let them down. And none of them are raising their hands and accepting accountability or saying, ‘We messed this up.'”

"Every Generation Needs A Revolution" pic.twitter.com/glK5nDOkP6

Task and Purpose provided context for the military commander’s comments, as well as provided a further quote from Scheller.

“And let’s not make any bones about it: calling out the commandant of the Marine Corps, the secretary of defense, and other top-ranking officers while in uniform is a big professional risk for any Marine, particularly those who have more to lose, like Scheller,” Task and Purpose noted.

“But it’s something that he acknowledges from the get-go and, to be frank, his candor about how his words may impact his career make the message all the more impactful,” the report added.

“And I will say that as a person who’s not at 20 years, I feel like I have a lot to lose,” Scheller said. “If you play chess you can only see two-to-three moves out because there’s too many variables. I thought through ‘if I post this video, what might happen to me?’ especially if the video picks up traction, if I have the courage to post it. But I think what you believe in, can only be defined by what you’re willing to risk. So if I’m willing to risk my current battalion commander seat, my retirement, my family’s stability to say some of the things I want to say. I think it gives me some moral high ground to demand the same honesty, integrity, accountability from my senior leaders.”

The news about Lt. Col. Scheller’s reported discharge from military duty comes as a Staff Sergeant Bronson has taken to social media to argue with and threaten American civilians who disobey her orders in a hypothetical martial law situation.

Becker News has reached out to her commanders for response. It is clear there is potential disciplinary action for soldiers who make political statements while in military uniform, which is a violation of the UCMJ. The case’s comparisons to that of Lt. Col. Stu Scheller is obvious.