Marine Judge Just Made an ‘Example’ of Lt. Col. Who Went Viral for Speaking Out Against Biden’s Disastrous Afghanistan Withdrawal 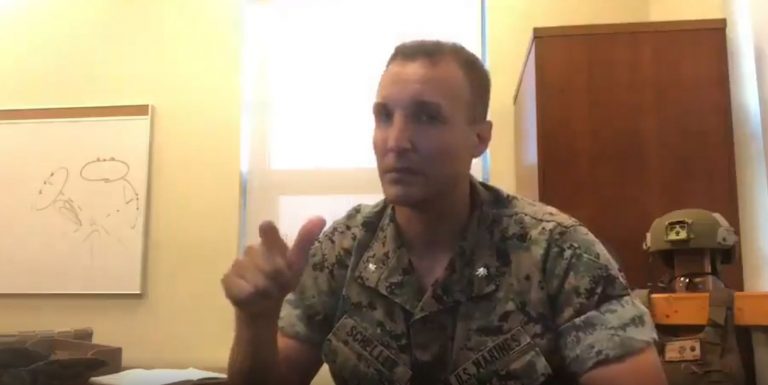 Lt. Col. Stu Scheller pressed for “accountability” from military leadership for the current sitation in Afghanistan. On Friday, a military judge began doling out the penalty for his criticism.

Scheller was given a sentence of one month forfeiture of $5,000 in pay and a direction to receive a letter of reprimand from a military judge.

On Thursday, Hines found Scheller guilty after he entered guilty pleas to all five charges he faced, CNN reported. The charges included “contempt towards officials,” “disrespect toward superior commissioned officers” and “failure to obey order or regulation.”  The charges stem from viral videos of Scheller criticizing military leaders about their handling of the disastrous Afghanistan withdrawal.

Scheller continued to post the viral videos even after he signed what amounted to a “gag order.” He knowingly put his career on the line to press the top brass for answers.

“People are upset because senior leaders let them down,” Lt. Col. Scheller said. “And none of them are raising their hands and accepting accountability or saying ‘we messed this up.’”

“Did any of you throw your rank on the table and say ‘hey, it’s a bad idea to evacuate Bagram Airfield, a strategic airbase, before we evacuate everyone.’ Did anyone do that?” he added. “And when you didn’t think to do that did anyone raise their hand and say ‘we completely messed this up?’”

“Potentially all those people did die in vain if we don’t have senior leaders that own up and raise their hand and say ‘we did not do this well in the end,’” he continued.

Lt. Col. Scheller later announced that he had been relieved of duty for cause.

“My chain of command is doing exactly what I would do … if I were in their shoes,” Scheller continued. “I appreciate the opportunities AITB command provided. To all the news agencies asking for interviews … I will not be making any statements other than what’s on my social platforms until I exit the Marine Corps.”

In late September, it was reported that Scheller was thrown in the brig for disobeying the court order.

“All our son did is ask the questions that everybody was asking themselves, but they were too scared to speak out loud,” Stu Scheller Sr., his father, told Task & Purpose. “He was asking for accountability. In fact, I think he even asked for an apology that we made mistakes, but they couldn’t do that, which is mind-blowing.”

Lt. Col. Scheller earlier predicted that the military command might respond by putting him in the brig.

“What happens when all you do is speak truth and no one wants to hear it. But they can probably stop listening because… I’m crazy… right?” Scheller wrote in one post.  “Col Emmel please have the MPs waiting for me at 0800 on Monday. I’m ready for jail.”

The U.S. military has warned both active duty and retired service members that no “disrespect” of President Biden will be tolerated. It appears the Biden administration is making an example of this policy with Lt. Col. Scheller.