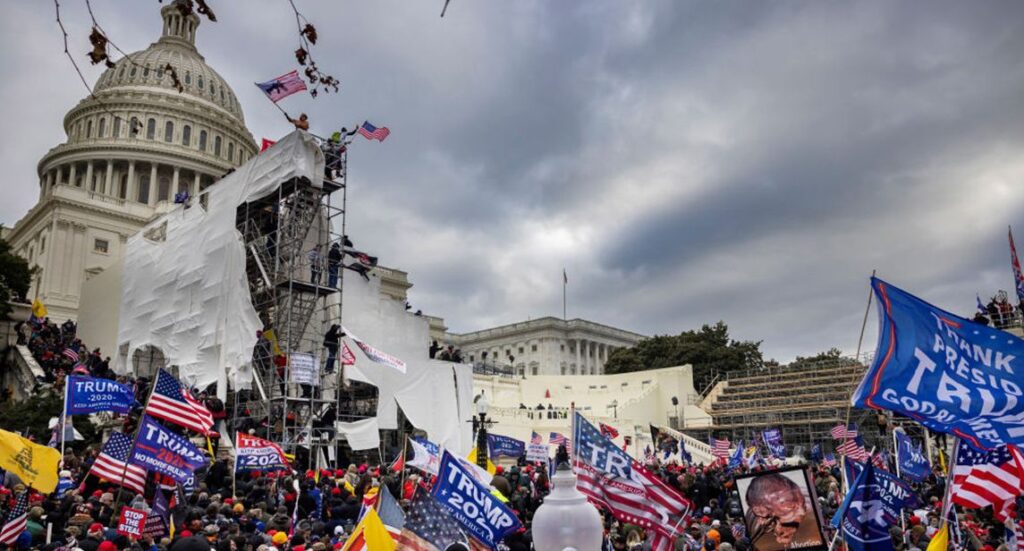 Mark Levin, conservative talk radio and Fox News host, has laid bare the real ‘coup’ that happened in American history. And it wasn’t the events of January 6. The best-selling author of “American Marxism” revealed his reasons for believing so in extended commentary on LevinTV.

“You know, ladies and gentlemen, there is a criminal investigation, and there has been, into January 6,” Levin said. “Over 600 American citizens have been charged with such heinous crimes as trespassing. Now, some people have been tried for assault – very few – and you know, doing damage to the Capitol building.”

“I make no excuses for that,” he said. “But the vast majority of those 630 or so people did nothing. And I happen to know several who were on the grounds of the Capitol building and were charged with trespassing and were told, ‘if you don’t plead guilty, we’re going to charge you with a felony and drag you through the entire court system.’ These are average people, they don’t have a million dollars for legal representation. Several of them have been put in solitary confinement for a period of six to eight weeks. They have been talking about abuses taking place. And notice the media could give a damn. As a matter of fact, whenever I talk about this, I am attacked by Soros front groups like Media Matters and so forth.”

“Well, they can attack me all they want,” he added. “The fact of the matter is that I don’t like the way these people are being treated in the least.”

“I mean, we have Black Lives Matter and Antifa beating the hell out of people, and attacking cops, killing some people, looting, arson, all kinds of criminality taking place, and you don’t see them being rounded up, SWAT teams going into their homes, dragging them out in the middle of the night, you don’t see these kinds of cases,” Levin continued. “As a matter of fact, the FBI said what they are doing here is the biggest investigation in the history of the FBI.”

“You know how many people have been charged with arms offenses in Washington D.C. breaking into that building?” he asked. “Not one. Not one. Because not one of them had a weapon [firearm]. Not one.”

“Again, I am not making excuses,” he added. “But to call this an ‘insurrection’ is a joke. You know who they are not investigating in this ‘great January 6 investigation’? Nancy Pelosi. Nancy Pelosi was offered, I was told, 20,000 National Guardsmen by the President of the United States Donald Trump and turned a deaf ear to it.”

“You know who told me that? The Chief of Staff to the Secretary of Defense, Kash Patel,” he added. “She didn’t ask for any, she didn’t want any. Well, why is that? What exactly was Nancy Pelosi’s orders? And since this rogue committee that she set up and you remember, Kevin McCarthy wanted certain members of his party on the committee, and she rejected every one of them. Instead, you get Never Trumpers like Liz Cheney and Adam Kinzinger.”

“What did Nancy Pelosi know and when did she know it?” Levin asked. “We’re never going to know.”

“So, this is the kind of ‘committee investigation’ going on,” he added. “But a ‘coup’? A ‘coup’? No, Russia collusion was the ‘coup.’ No, the Hillary Clinton campaign and the DNC laundering money through Perkins Coie law firm, coming up with that phony dossier, triggering a criminal investigation by Robert Mueller. The FBI lying to the FISA court on more than one occasion so it could use the Patriot Act against the Trump campaign. I would say that would be a ‘coup.’

The Federal Bureau of Investigation has not been able to produce any evidence that Donald Trump had anything to do with the January 6 events that have been deceptively characterized by the media as an “insurrection” and a “coup.”

“The FBI has found scant evidence that the Jan. 6 attack on the U.S. Capitol was the result of an organized plot to overturn the presidential election result, according to four current and former law enforcement officials,” Reuters reported in August.

The Nation will indeed remember January 6, 2021—and President Trump’s singular responsibility for that tragedy. It is impossible to imagine the events of January 6 occurring without President Trump creating a powder keg, striking a match, and then seeking personal advantage from the ensuing havoc.

However, President Trump could not have “incited” the Capitol attack that was planned before his speech was given. The New York Times reports that the “first barriers were breached” at 12:53 p.m. at the Northwest side of the Capitol. The NY Times then claims that Trump’s “call to action” was at 1:12 p.m. Of course, this is nearly twenty minutes after the purported first “breach” of the barricades. The speech was given a mile and a half away.

Trump’s speech was standard political fare, and he even told the audience at his speech to “peacefully and patriotically make their voices heard.” He also deliberately said “fight” in the commonplace political context:

The Commander-in-Chief and head of powerful intelligence and law enforcement agencies did not select a motley rabble of disparate extremist elements to carry out a “coup” to disrupt the objections of the Electoral College. The extremists in the Capitol building were not even found to be armed with firearms. This was a ludicrous argument from the very beginning, but that did not stop major news outlets from promoting it.

Liberal attorney Jonathan Turley effectively argued that “insurrection” is a misleading description of what occurred on January 6.

While the majority of people who went to the Capitol were protesters and did not engage in the riot, there were some who sought to physically disrupt or prevent the certification, including the use of violent entry into the Capitol.”

“Yet, there remains a striking contrast in how other riots are characterized or prosecuted,” the attorney continued. “Most of those arrested for violent protests after the death of George Floyd saw their charges dropped by state prosecutors. For months, rioters sought to burn federal buildings or occupy state capitals and, in some cases, seized police stations, sections of cities, even occupied a city hall. They were not declared insurrectionists; they were rioters before being set free after brief arrests.”

“Many of us remain disgusted and angered by the Jan. 6 riot — but it was a riot,” Turley concluded.

The U.S. media not only refuses to report accurately about the January 6 events, they have turned a blind eye to much more serious threats to the American republic. If there was an actual “coup” in American history, it happened prior to and during the November 3rd election.