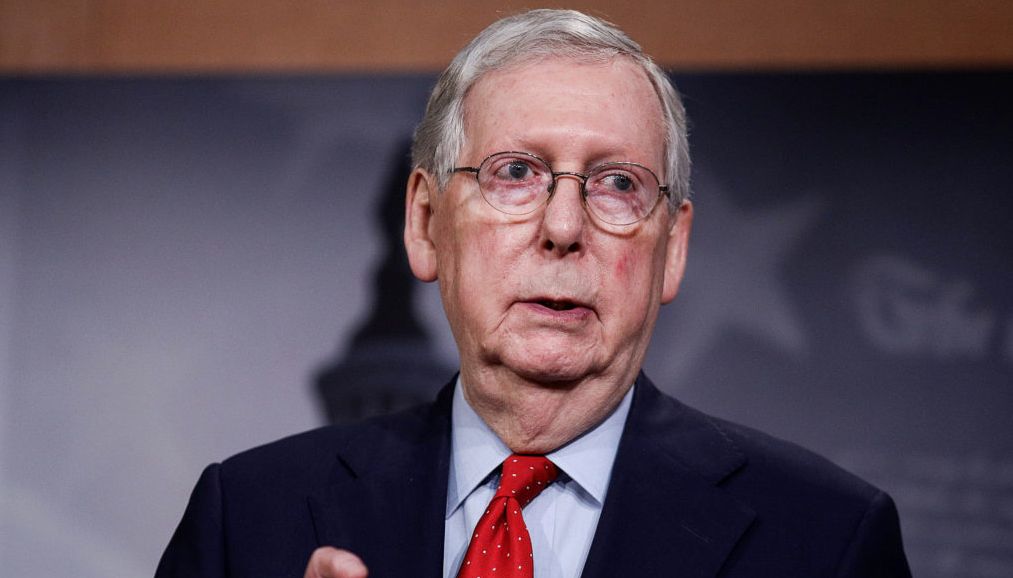 Senate Minority Leader Mitch McConnell (R-KY) was one of 19 Republicans who joined with Democrats to pass a $1.2 trillion “infrastructure” bill through the Senate on Tuesday. The bill passed 69-30 as Kamala Harris presided in the Senate.

“Today, we proved that democracy can still work,” Biden announced at the White House after the bill’s passage, while pointing to the assistance of McConnell.

“We can still come together to do big things, important things, for the American people,” Biden added.

The vote paves the way for Biden’s bigger $3.5 trillion package that is a radical Democrat spending spree: ‘Free’ child care, aggressive climate policies, and legalization of millions of illegal immigrants.

While the $1.2 trillion infrastructure bill is moving to the Pelosi-led House, the Speaker has said that she won’t allow a vote until the $3.5 trillion package is approved. That gargantuan legislation would be filibuster-proof and could be passed through reconciliation.

The infrastructure bill has only a modest amount of what everyone can agree is ‘infrastructure,’ and even less funding for roads, highways, rails and bridges, which the president has been touting.

Transportation Secretary Pete Buttigieg was asked on Sunday why Biden’s plan devoted only 5.6 percent of its spending to roads and bridges.

‘So yes, infrastructure includes energy infrastructure,” he added. ‘You know what else is part of infrastructure now? Broadband. … I’m proud of the fact that we’re going to finally get broadband out to every American, because we know, especially in rural areas, how much that’s cutting people off from opportunity.”

McConnell also pointed out the meager amount of funding for roads and bridges in his statement criticizing the bill.

“Unfortunately, less than 6% of this massive White House proposal would go to roads and bridges,” McConnell tweeted. “It would spend more on electric cars than on roads, bridges, ports, airports, and waterways combined.”

The Senate Minority Leader would vote on the infrastructure bill anyway, along with 18 Republicans. Here is the full list of Republicans who voted with the Democrats. Do with it what you will.

On Tuesday, the Atlantic pointed out that Nancy Pelosi is expected to step down following the mid-term elections. McConnell might want to take a hint and follow her lead.