When it comes to bad news in Florida, there can never be enough for the mainstream media. There appears to be one united mission involved when it comes to COVID reporting on Florida: Take down Governor Ron DeSantis.

The popular Republican governor has flaunted the purported “settled science” emanating out of Washington, blue states, and the likes of Dr. Fauci by maintaining Americans’ rights and freedoms during what is tantamount to a nationwide ‘state of emergency’ that has been wearing on for nearly 18 months.

So, when John Hopkins University dumped what amounted to a 300% surge in COVID deaths in a dataset on Friday, the media pounced on the spike to attack DeSantis’ approach to managing his state during the pandemic crisis. It should be noted that Joe Biden’s home state of Delaware was also included in the distorted data dump.

“A massive data dump by Florida and Delaware has skewed the daily COVID-19 death figures compiled by the widely-respected Johns Hopkins University and made it appear that they jumped by 300 percent Friday,” the Daily Mail reported.

“The figure trebled from 321 on Thursday to 891 on Friday raising fears that the more highly contagious Delta variant is now translating into spiraling fatalities nationwide,” the report continued.

“Florida made up almost half of the daily tally, with 409 of the deaths recorded coming from the Sunshine State,” the report added.

Florida’s COVID-related death figures were reported on Friday, leading to the confusion.The state recorded 108 deaths from COVID-19 on Saturday, which was down from 148 reported just eight days earlier.

It gets even worse for Biden’s home state of Delaware, where he served as a senator for decades. The state’s officials announced 130 new deaths on Friday, however, the deaths occurred between mid-May 2020 and late June this year, the Daily Mail notes. As a matter of fact, the state recorded zero COVID-19 deaths on Friday and had only two fatalities recorded over the last week.

When the figures were corrected, there was only a 2.5 percent increase nationwide in deaths week over week.

Readers may recall the media-fabricated ‘scandal’ over purported underreported COVID-related cases and deaths in Florida driven by a fired data scientist named Rebekah Jones. The media amplified Jones’ claims that there was a COVID ‘cover-up’ in the state and claimed that she was fired for political reasons.

Despite a massive surge in COVID cases being driven by the Delta variant, which even the vaccinated can spread, the mortality rates have remained statistically flat in the United States. By the way, here are the actual COVID mortality rates for Florida, as of Monday. 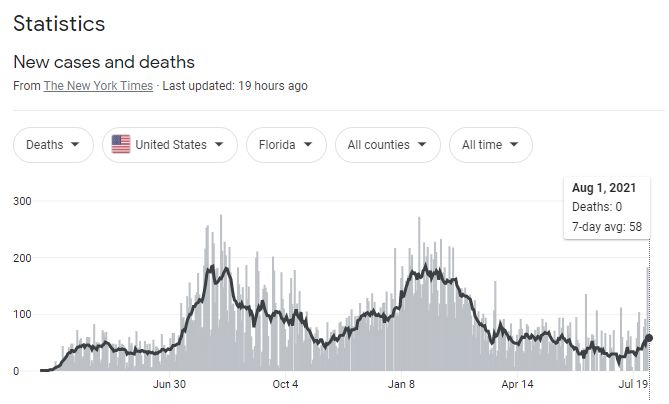