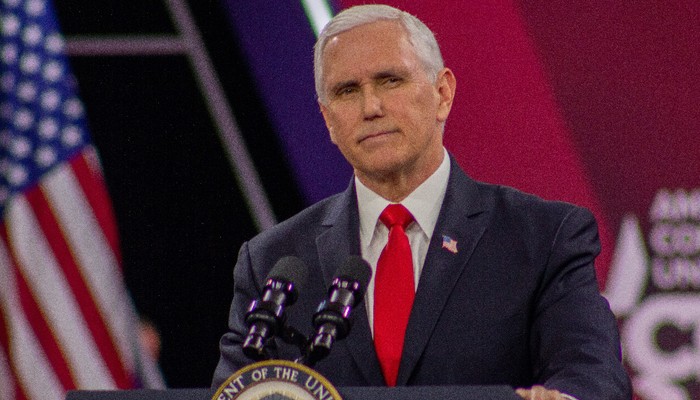 Former Vice President Mike Pence has been extremely quiet since January 6th, when he presided over an Electoral College objection process that was cut short by his rules decisions.

Amid the Capitol uprising that even spurred him to be ushered out by the Secret Service, it seemed to be a foregone conclusion that Pence must have been partial to the arguments that there were no major irregularities in the 2020 elections.

Pence put that presumption to rest today with an op-ed published at the conservative Daily Signal. In the opinion piece, the former vice president weighs in on the “election irregularities” that he believes played a role in keeping the 2020 election from being “free and fair.”

“After an election marked by significant voting irregularities and numerous instances of officials setting aside state election law, I share the concerns of millions of Americans about the integrity of the 2020 election,” Pence writes.

“That’s why when I was serving as presiding officer at the joint session of Congress certifying the Electoral College results, I pledged to ensure that all objections properly raised under the Electoral Count Act would be given a full hearing before Congress and the American people,” he continued.

“The tragic events of Jan. 6—the most significant being the loss of life and violence at our nation’s Capitol—also deprived the American people of a substantive discussion in Congress about election integrity in America,” he wrote.

This is a remarkable admission for Pence to make: He is clearly blaming the Capitol riots for effectively ending the Electoral College objections. This is not a strong message to send to those who would seek to sabotage Congress in the future during legitimate election processes that were taken advanage of by Democrats after the 2000, 2004 and 2016 elections.

“Many of the most troubling voting irregularities took place in states that set aside laws enacted by state legislatures in favor of sweeping changes ordered by governors, secretaries of state, and courts,” he went on.

“While legislators in many states have begun work on election reform to restore public confidence in state elections, unfortunately, congressional Democrats have chosen to sweep those valid concerns and reforms aside and to push forward a brazen attempt to nationalize elections in blatant disregard of the U.S. Constitution,” Pence continued.

“Congress will vote this week on HR 1, the so-called For the People Act, a massive 800-page election overhaul bill that would increase opportunities for election fraud, trample the First Amendment, further erode confidence in our elections, and forever dilute the votes of legally qualified eligible voters,” he warned.

As reported earlier, HR 1 would make the 2020 election nightmares a permanent feature of American politics.

It should be noted that “fortifying” the election is the same verbiage used by radical groups, labor unions, and giant corporations that schemed in the shadows to interfere in the 2020 election and beyond to damage Trump.

The bill would be more aptly named the “For the Democrats Act of 2021.” Ironically the HR 1 bill also concedes voting machine issues, as also reported here earlier:

The “For the People Act of 2021,” or H.R. 1, as it currently stands in the 117th Congress, contains major reforms to the use of voting machines in United States elections.

In Section H of the bill encompassing the “use of voting machines manufactured in the United States,” it permit voters who do not wish to use voting machines the right to request and cast hand-marked paper ballots that are counted by hand and not voting machines.

Nonetheless, CNN blasted Pence for suggesting that anything was amiss with the 2020 election:

Former Vice President Mike Pence is seizing on a Democratic-led initiative to streamline election standards to again push false claims of voting irregularities in one of his first public statements since leaving office.

Pence expressed concern about “the integrity of the 2020 election,” citing “significant” and “troubling” voting irregularities in an op-ed for the conservative publication Daily Signal.
There is no evidence of widespread voter fraud that would have changed the outcome of the 2020 election, and Pence did not make any specific claims in his op-ed. Rather, the former vice president continued to promote the misinformation pushed by former President Donald Trump that led Trump supporters to storm the US Capitol as Pence joined the Senate to certify the election’s results.

The more CNN pushes this narrative that the 2020 election was absolutely, positively, 100% on-the-level the more Americans are right to suspect that there is a political angle at play. The same networks that push back so hard were 95% negative against Donald Trump during his presidency. These networks desperately wanted Trump out; therefore, their own coverage undercuts their credibility on the matter.

Furthermore, we found out that a judge in a Mississippi race discovered that 78% of mail-in ballots in a local election in 2020 were fraudulent. How many cases were there regarding the 2020 presidential election that were never even heard on the merits, but were rather dismissed on procedural grounds or purported lack of standing? Nearly all of them.

There are so many things about the 2020 election that don’t add up, and no amount of Democrat caterwauling, gnashing of teeth, and screaming about it will change the facts. Supposedly, 81 million Americans showed up to vote for no-show candidate while the incumbent gained votes, won Ohio, Florida, and Iowa, and lost Georgia in the southeast (but only Georgia). Furthermore, the GOP swept all toss-up House races, flipped 15 seats, gained 12 seats, and Trump won 18 out of 19 bellwhether counties.

Such election statistics are so improbable as to be nearly impossible in a “free and fair election.”

Many Americans see the actions Democrats are taking to weaken election security further, and simply conclude this is a party that is perfectly fine with election results that are questioned by millions of voters in the future.