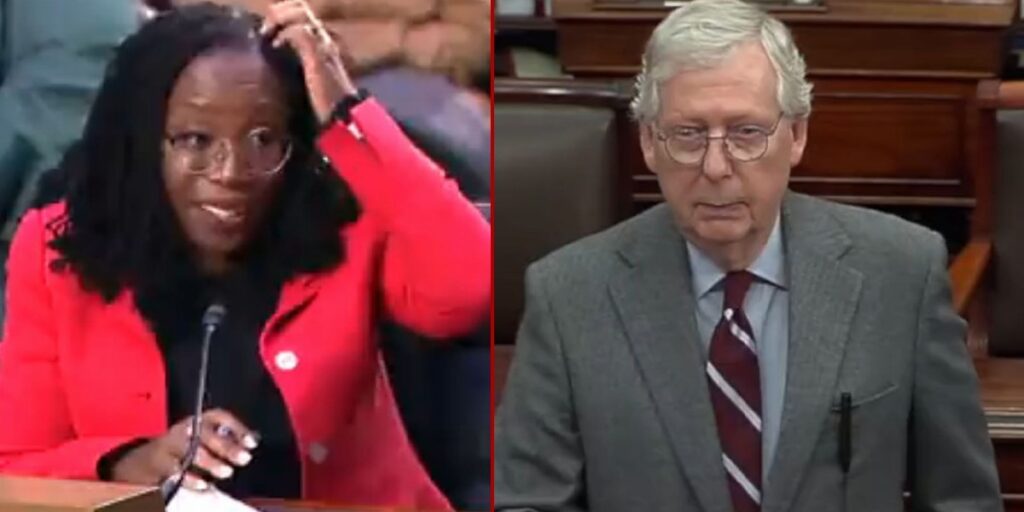 McConnell made the announcement despite going into the confirmation process with an “open mind.”

“After studying the nominee’s record and watching her performance this week, I cannot and will not support Judge Jackson for a lifetime appointment to the Supreme Court,” McConnell said.

The notoriously calculating McConnell has apparently read the tea leaves and decided that the Republican Party would be ill-served to strike a conciliatory tone with partisan Democrats — even over a Supreme Court nominee.

Sen. John Cornyn had stated earlier that he believed the GOP support for Ketanji Brown Jackson would be “south of three.”

“I think it’s south of three” Republicans likely to support Jackson, said Cornyn. “That’s what happened in her court of appeals hearing. She seems like a very nice lady, and certainly well-accomplished, but I don’t think anybody is under any illusion about how she’s going to line up on the court.”

“KBJ,” as she is called, will nonetheless almost certainly be confirmed along partisan lines. The Democrats have a bare majority in the Senate, including President of the Senate Kamala Harris as the deciding vote if necessary.

The confirmation hearings have nonetheless been poor optics for the Democratic Party on a number of fronts in a midterm election-year that could get extremely messy for their majority party.

Conservatives and independents have expressed concerned about Brown Jackson’s record of being unusually lenient in child pornography cases.

When @HawleyMO asked her about this she said she had nothing to add… pic.twitter.com/lr3oDrlmyK

Senator Marsha Blackburn asked her about her track record of supporting the controversial radical program known as Critical Race Theory.

.@MarshaBlackburn: “Do you consider Critical Race Theory in your sentencing decisions as a judge?”

Judge Jackson: “Critical Race Theory, any academic theory is not considered in my sentencing. It never comes up in sentencing.” pic.twitter.com/0Lck1uAWYM

But Brown Jackson’s most memorable moment may have come when she ignited controversy and mockery by declining to define a ‘woman.’

Strong work from my Senator @MarshaBlackburn — exposing this duplicity: KBJ cannot claim historic status as a pioneer black woman…yet refuse to describe what defines a woman.pic.twitter.com/pUI2ebH2v4

She stated that she cannot provide a definition, adding the she is “not a biologist.”

If the Republicans had the Senate majority, there is a possibility that she would not be a Supreme Court Justice, either. But her confirmation hearings and the recent health scare by Justice Clarence Thomas should remind Americans about what is at stake in the midterm elections.