Monkeypox, a rare viral disease, has found its way into the headlines and it is apparently spreading across the United States. A New York City resident has tested positive for the virus that causes monkeypox, state health officials announced late Friday.

As governments around the world intensify mass vaccination efforts and point to pandemics as a pretext for infringing on civil liberties, it is worth noting that an influential global security organization known as the Nuclear Threat Initiative published a wargame document in March 2021 that specifically predicted a monkeypox outbreak in May 2022.

“A year ago, at a munich conference [sic], the NTI predicted a monkeypox terror attack in May 2022 in a germ game, except it appears they were the terrorists,” TheBlaze Senior Editor Daniel Horowitz reported.

The wargame document provides a valuable glimpse into how national governments and intergovernmental organizations intend to prepare for the next pandemic.

“In March 2021, NTI partnered with the Munich Security Conference to conduct a tabletop exercise on reducing high-consequence biological threats,” the conference paper read. “The exercise examined gaps in national and international biosecurity and pandemic preparedness architectures—exploring opportunities to improve prevention and response capabilities for high-consequence biological events. This report summarizes the exercise scenario, key findings from the discussion, and actionable recommendations for the international community.”

“As part of the scenario development process, NTI conducted a virtual consultation with experts in December 2020,” NTI adds.

The wargaming documents puts the initial date of the monkeypox pandemic of 2022 as May 15: 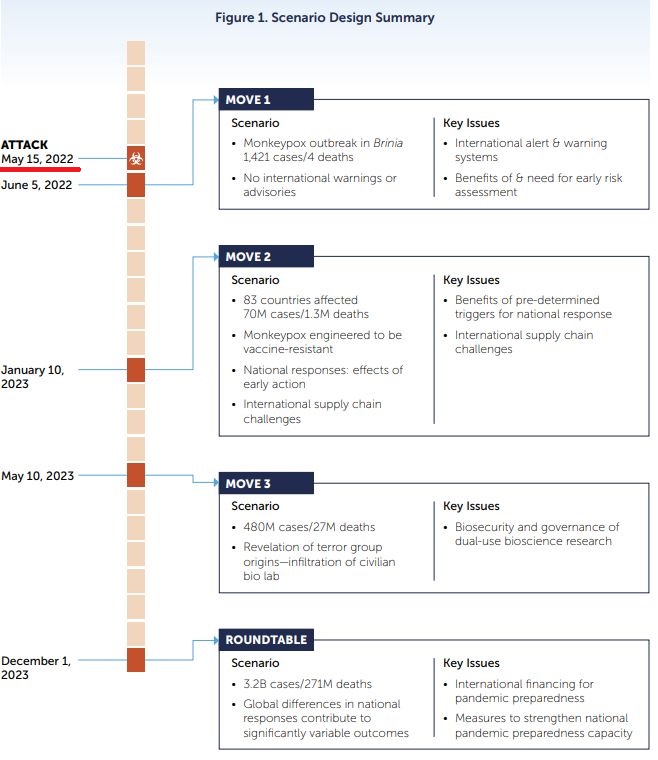 On Friday, the World Health Organization confirmed around 80 cases of monkeypox with recent outbreaks reported in 11 countries, according to its statement. The outbreaks are ‘unusual’ because they are occurring in nations where the virus is not ‘endemic,’ the WHO added.

#Monkeypox has so far been reported from 11 countries that normally don't have the disease. WHO is working with these countries & others to expand surveillance, and provide guidance.
There are about 80 confirmed cases, and 50 pending investigations. More likely to be reported. pic.twitter.com/YQ3pVJVNVQ

“WHO is working with the affected countries and others to expand disease surveillance to find and support people who may be affected, and to provide guidance on how to manage the disease,” the agency said.

The NTI wargaming document can be read in full below:

In its Foreword, while studiously avoiding any mention of the Wuhan laboratory, NTI discusses how future biological threats may be caused by “deliberate misuse” of biological pathogens or “laboratory accident.”

“Over the past two years, the world has faced the devastating impact that a biological event can have on human health, economies, and political stability,” the document states. “As of this writing, the SARS-CoV-2 virus has infected more than 250 million people, killed more than five million, and caused trillions of dollars in economic losses.”

This is typical obfuscatory language that elides that coronavirus response measures, such as lockdowns, have been evaluated as failing to stop the spread of the disease or reduce excess mortality, while inflicting devastating tolls on societies and economies.

“COVID-19 has revealed that national governments and the international community are woefully unprepared to respond to pandemics—underscoring our shared vulnerability to future catastrophic biological threats that could meet or exceed the severe consequences of the current pandemic,” the NTI document goes on. “Although national and global leaders are appropriately focused on the immediate demands of the COVID-19 response, the international community cannot postpone implementing the steps necessary to protect against future biological threats. This must include the recognition that while naturally emerging pandemics continue to pose a significant threat, the next global catastrophe could be caused by the deliberate misuse of the tools of modern biology or by a laboratory accident.”

The Nuclear Threat Initiative describes itself as a “nonprofit, nonpartisan global security organization focused on reducing nuclear and biological threats imperiling humanity.” Furthermore, NTI “collaborates with governments and organizations to raise awareness, advocate, and implement creative solutions,” according to its official website.

NTI was founded in 2001 by CNN-founder Ted Turner and former Democratic U.S. Senator from Georgia Sam Nunn. It is currently led by the Co-Chair and Chief Executive Officer Ernest J. Moniz, who was the U.S. Secretary of Energy prior to the Trump administration.

As disclosed in its 2021 annual report, dozens of charities, foundations, and national governments contribute to NTI’s operations, including: The Bill & Melinda Gates Foundation, the MacArthur Foundation, and The Rockefeller Foundation.

The timing of the monkeypox outbreak coincides with an aggressive push for the World Health Organization to accrue vast new powers, including to unilaterally declare “pandemics” that would compel signatories to enact measures, including vaccine mandates.

President Joe Biden and world leaders recently made it clear at the recent ‘2nd Global Covid Summit‘ that response measures to the novel coronavirus were just the beginning of government efforts to counteract pandemics.

“The World Health Assembly this month, WHO will present a plan to strengthen the global architecture for health emergency preparedness, response and resilience,” WHO Director Tedros Ghebreyesus said. “This includes the creation of a financial intermediary fund to support equitable access to life saving tools in the face of future epidemics and pandemics.”

“And we’re increasing our support for new pandemic preparedness and global health security fund that will be established at the World Bank this summer, with $450 million in seed funding,” Biden added.

The Biden administration is spearheading an initiative to amend International Health Regulations with a proposal (Provisional agenda item 16.2) to the World Health Assembly that was made public in April.

According to the proposal, amendments to the International Health Regulations (such as regarding lockdowns, border closures, mask mandates, and vaccine mandates) would purportedly come into effect for all 194 member states.

“Pursuant to paragraph 3 of Article 55 of the International Health Regulations (2005), any amendments to the Regulations adopted by the Health Assembly would come into force for all States Parties on the same terms, and subject to the same rights and obligations, as provided for in Article 22 of the Constitution of WHO and Articles 59 to 64 of the International Health Regulations (2005),” the proposal reads.

The pandemic measures include the following, which shall be enforced by a signatories’ “Compliance Committee”:

New 4: In implementing health measures pursuant to these Regulations, including Article 43, States Parties shall make reasonable efforts, taking into account relevant international law, to ensure that:
(a) Contingency plans are in place to ensure that health care worker movement and supply chains are facilitated in a public health emergency of international concern;
(b) Travel restrictions do not unduly prevent the movement of health care workers necessary for public health responses;
(c) Trade restrictions make provision to protect supply chains for the manufacture and transport of essential medical products and supplies; and
(d) The repatriation of travellers is addressed in a timely manner, given evidence-based measures to prevent the spread of diseases.

The Biden administration is also recommending the following: intensifying ‘health surveillance’ of all countries and citizens; creating a global communication network that reports to the WHO; grants the WHO the authority to sanction non-compliant countries; bestows authority to Director-General Tedros Adhanom Ghebreyesus to declare pandemics or emergencies; recognizes the WHO’s authority to determine thes steps a country should take in a pandemic response, including vaccine mandates; and authorizes funding for the WHO in the event of a “pandemic.’

Legally, any and all international agreements and foreign treaties must abide by the rights and powers delegated to the U.S. government under the Constitution or else be rendered null and void as “unconstitutional.”