MSNBC Turns on the President: Joe Biden is ‘The Face Of The Failure Of The Withdrawal’ 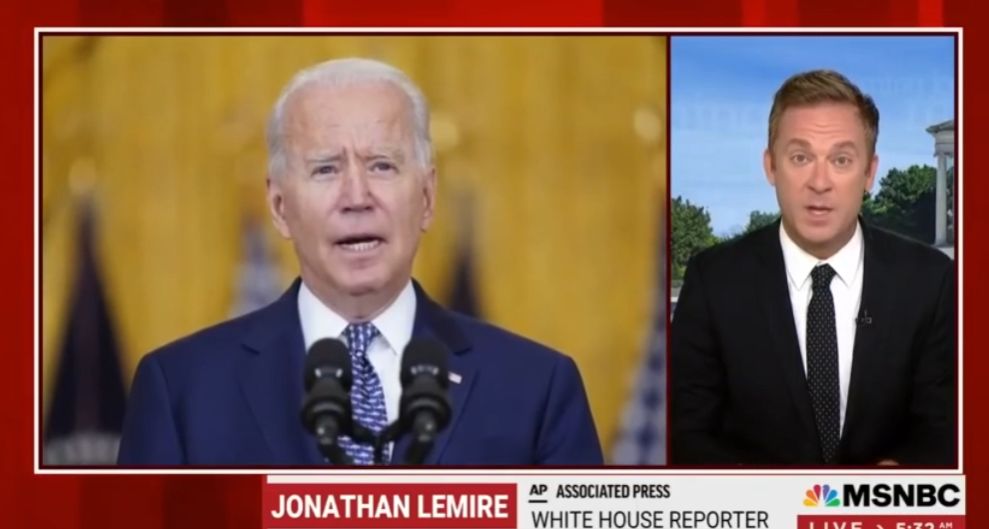 President Joe Biden is facing headwinds from a negative mainstream press for the first time in his presidency. While the president has been a largely absentee one, raising questions of who is actually running the government, Joe Biden’s absence during the collapse of Afghanistan while vacationing at Camp David is apparently the straw that broke the camel’s back.

“Joe Biden is going to be the face of the failure of the withdrawal,” White House reporter Jonathan Lemire said. “He is the president right now, as this is happening, and just a few weeks ago, just a little over a month ago, on July 8, when he defended the decision on Afghanistan, he talked about how, and I’ll quote from him here, ‘there’s going to be no circumstance where you see people lifted off the roof of an embassy in the United States from Afghanistan,’ but we are seeing scenes like that play out in Afghanistan right now.”

“Terrible footage coming from the airports of hundreds of Afghan citizens trying to cling to American jets as they’re taking off, including extremely disturbing footage this morning about some people, after the planes take off, falling from the planes back to the tarmac, back to the streets below, really difficult to watch,” Lemire said.

The White House reporter is referring to harrowing images of frantic Afghanis who cooperated with the U.S. occupation of their country being stranded at the Kabul International Airport as the Taliban closed in. Many of those Afghanis who did not make it onto transport planes were executed by the Taliban.

There was even a haunting image of a person clinging to a plane while it was in mid-flight.

This is what failed foreign policy looks like. I was just sent this from an Air Force pilot. Policy mistakes matter. Biden continues his streak of being on the wrong side of virtually every US foreign policy decision. pic.twitter.com/t4TGADQvjh

“This is what failed foreign policy looks like,” Eli Bremer wrote. “I was just sent this from an Air Force pilot. Policy mistakes matter. Biden continues his streak of being on the wrong side of virtually every US foreign policy decision.”

MSNBC’s observation that such disturbing scenes in Afghanistan will now be a part of Biden’s legacy is accompanied by sharp criticism from CNN.

On Monday, the news network dissected every broken promise on Afghanistan made by Biden on the campaign trail and during his presidency.

“The rapid fall of Afghanistan stunning the Biden administration and this nation, quite frankly,” Brianna Keilar said before running the damning clips. “Many of the promises and the predictions and the words of the president and his White House are coming back to haunt them.”

When MSNBC and CNN have turned on a Democratic president, the end may very well be nigh. Little wonder that 25th amendment talk about President Biden is picking up steam.

WATCH: CNN Shows One Broken Promise After Another in Devastating Takedown of Biden Presidency