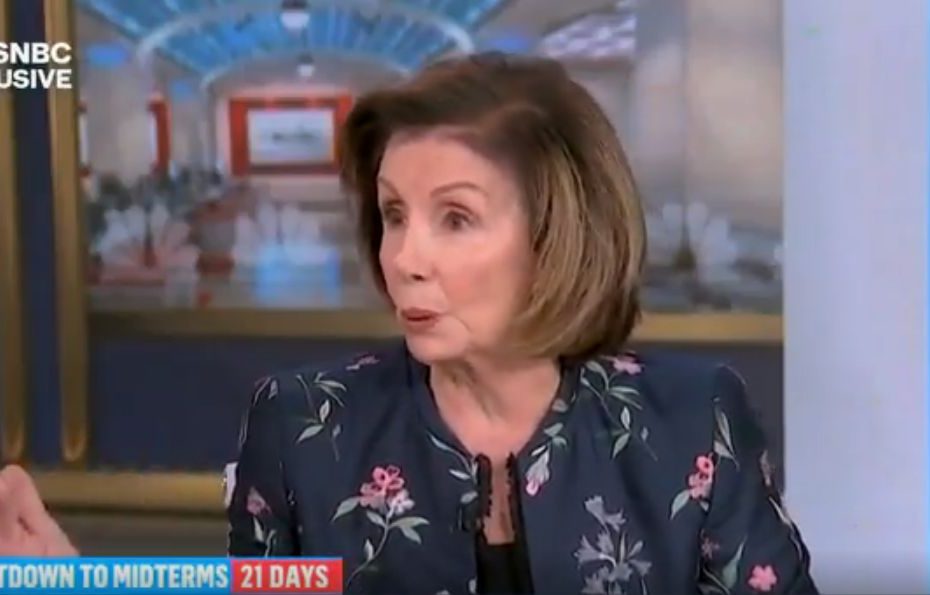 The Democratic Party continues to come across as tone-deaf and out-of-touch to Americans who are justifiably concerned about rampant crime, soaring inflation, and growing signs the country is heading into a deep recession.

On Tuesday, Speaker Nancy Pelosi made this growing impression far worse in an interview with MSNBC’s Andrea Mitchell. Watch:

“So let’s talk about rising inflation concerns along with crime, giving momentum, new momentum to Republicans after the Democrats were closing the gap, the historic gap,” Mitchell said.

“So after the Supreme Court ruling, there was huge outrage, that has seemed to subside, at least among overriding concerns, despite all the legislative accomplishments, and I want to cite them,” Mitchell went on, sycophantically. “I want to, you know, say it’s been an extraordinary session. You and the President have done so much in terms of domestic concerns, the economy.”

“So why is this message, why do you think the president has gotten this message through the voters?” Mitchell asked.

“Well, first of all let me say that I think that much of what you’ve said, I don’t agree with that, is to say the New York Times poll, I think is an outlier poll,” she claimed. “You decide one poll, but all the other polls…

“No, but they, but that was one that brought down the average, and it was an outlier,” Pelosi went on. “It wasn’t even that big a sample. So, I dismiss that.”

What Nancy Pelosi is actually ‘dismissing’ is Americans’ concerns about skyrocketing inflation that is damaging their ability to make ends meet, as well as rampant crime that is destroying inner cities and threatening citizens’ safety.

The polling that Pelosi is brushing off shows the Republicans are poised to make big gains in the midterm elections.

“We have the result of our third New York Times/Siena College national survey of the midterm cycle to go with your coffee this morning: 49 percent of voters say they back the Republican congressional candidate in their district, compared with 45 percent backing the Democratic one,” the Times reported.

“It’s a modest but notable swing from last month, when Democrats led by one percentage point among likely voters,” the Times added. “Since then, the warning signs for Democrats have begun to add up, including Republican polling gains in key Senate races like those in Nevada, Wisconsin and Pennsylvania, and surprising Republican strength in districts in Rhode Island and Oregon where Democrats would normally be safe.”

“Up to this point, Democrats have maintained a narrow lead in polls asking whether voters prefer Democrats or Republicans for Congress, but there have been warning signs for the party here as well,” the report noted. “Republicans have led in several high-quality polls, like ABC/Washington Post, CBS/YouGov and Monmouth University. Today, the Times/Siena survey adds a fourth such poll to the pile.”

Thus, Pelosi’s claim that it was an “outlier poll” has no merit.

“The evidence for a shift toward Republicans appears to be underpinned by a change in the national political environment,” the Times went on. “Gas prices went up again. The stock market is down. A variety of data suggests that the electorate’s attention is shifting back to issues where Republicans are on stronger ground in public opinion, like the economy, inflation, crime and immigration, and away from the summer’s focus on democracy, gun violence and abortion, where Democrats have an edge.”

But Pelosi has rejected these concerns and has doubled down on matters that don’t impact most Americans’ lives, such as abortion returning to become a state issue, as well as the never-ending January 6 sage featuring Donald Trump, who is no longer in office. Pelosi reinforced this tone-deaf impression in the MSNBC interview.

“I have been since Congress adjourned, I’ve been in an average of five states a week,” Pelosi also sad in the MSNBC interview. “And I can tell you that women’s concerns about their freedom are very, very much, still very significant in terms of how they will vote. In fact, 80% of people who care about a woman’s right to choose say they will vote, They will determine who they vote for.”

“So, again, Washington has always been, ‘oh, Republicans are gonna win, there’s no question for a year and a half now’,” she added. “That has diminished in terms of that certainty. And there is a, a real race on the Republicans are pouring endless money, dark, undisclosed, special interest money into the campaigns, but we’re holding our own. It’s a matter of who turns out to vote.”

“Tere are issues that we, of course, we want fight inflation,” she claimed. “It’s a global issue, but some of the inflation in our country sprang from the fact that this president created nearly 10 million — at least 9 million jobs working with the private sector. The private sector creates a lot of that.”

Inflation rose 8.2% in September and core inflation was up 6.6% at a forty-year high — far worse than “experts” expected. The ‘Inflation Reduction Act,’ which is more accurately a green slush fund bill filled with radical spending projects, has utterly failed to do what the Democratic Party is claimed.

Reporter: "Is there a timeline for when the [Inflation Reduction Act will reduce inflation?]

The White House on Monday responded to complaints about the IRA by promising Americans they can see the law start to reduce inflation “early next year” — conveniently, after the midterm elections.

President Joe Biden has already tried to pre-blame Republicans for future inflation, due in part because the Inflation Reduction Act is doomed to fail.

If Republicans in Congress get their way, prices will go up and inflation will get worse.

“If Republicans in Congress get their way, prices will go up and inflation will get worse,” Biden claimed. “It’s that simple.”

But the Republican Party won’t be able to single-handedly pass legislation through Congress, since their hold on the Senate would not exceed 60 seats. Thus, Biden is accidentally admitting that inflation will get worse no matter who controls Congress.

Independent Journalist Glenn Greenwald provided another poll to further illustrate the Democrats’ willful blindness to the problems facing the country.

The 3 issues Americans are most worried about: Inflation, Economy/Jobs and Immigration.

People perceive the GOP's top priorities are also those.

But they see that Dems are most obsessed with a 3-hour riot that happened almost 2 years ago: pic.twitter.com/lAPf477hGU

“Fascinating new Harvard-Harris poll: The 3 issues Americans are most worried about: Inflation, Economy/Jobs and Immigration,” Greenwald pointed out on Sunday. “People perceive the GOP’s top priorities are also those. But they see that Dems are most obsessed with a 3-hour riot that happened almost 2 years ago.”

The Democrats are thus making matters worse for their midterm prospects by continuing to live in denial while many American voters are suffering. There is no reason for voters to trust a political party to represent them in government if they won’t even acknowledge their problems, let alone propose any solutions to address them.