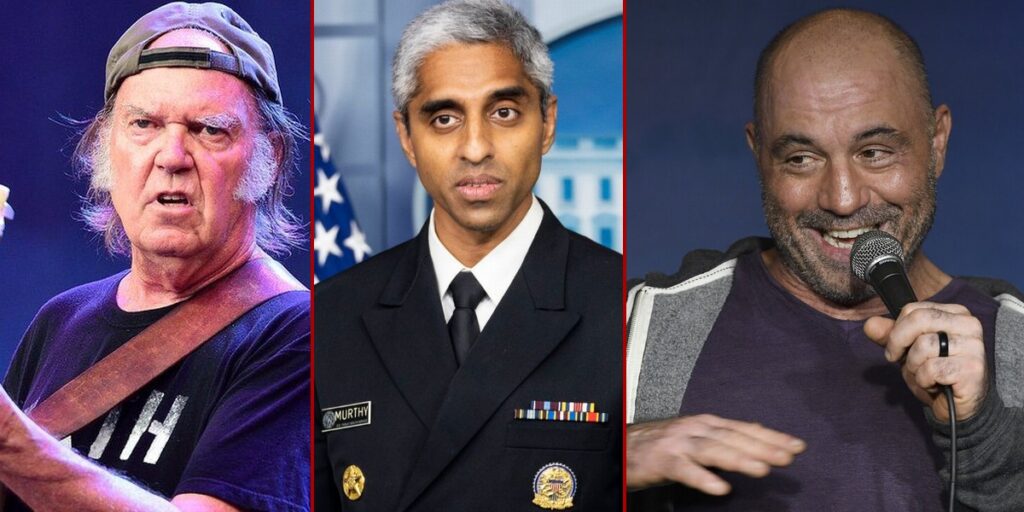 The Surgeon General and his biomedical tyrant colleagues would censor Joe Rogan in a heartbeat if they could do so without directly violating the First Amendment.

So, they just have their Big Tech cronies do it for them. On Tuesday, the Surgeon General Vivek Murthy appeared on “Morning Joe” and pressured Spotify to ban Joe Rogan, whose podcast listeners dwarfs viewership for MSNBC shows. Watch:

“What do you think are the best ways to push back on misinformation about COVID that continues to be aggressively pushed, whether it be Joe Rogan’s podcast or all over Facebook?” the host asked Murthy, according to The Blaze.

This is nonsense. The Biden administration’s motto is that “people don’t have the right to make their own decisions.” Plus, Biden officials and public health “experts” have done nothing but lie to Americans from the very beginning.

Murthy said that Big Tech companies have an “important role to play” since they are the “predominant places where we’re seeing misinformation spread.” Yes, a very totalitarian role called “censorship.”

“This not just about what the government can do,” he went on. “This is about companies and individuals recognizing that the only way we get past misinformation is if we are careful about what we say and use the power that we have to limit the spread of misinformation.”

On Wednesday, YouTube announced that it was perma-banning Dan Bongino from its platform (spoiler alert: He left voluntarily first and has about two million Rumble followers anyway).

But Murthy and Neil Young and all the other biomedical fascists are sure to be disappointed by the latest news: Spotify refuses to remove Joe Rogan. It has begun delisting Neil Young songs.

“Spotify Technology SA is in the process of removing Neil Young’s music, according to people familiar with the matter, as the folk-rock star isn’t wavering in his objections to Joe Rogan’s podcast,” WSJ reported in an exclusive.

“They can have [Joe] Rogan or Young,” Neil Young wrote in a letter to his manager, “Not both.” Young demanded Spotify remove his music over “false information about vaccines.”

“Spotify struck a deal with Mr. Rogan in 2020 worth more than $100 million, according to people familiar with the matter, bringing his popular and lucrative show exclusively to its service,” WSJ pointed out.

The AP reported that soon after Young issued his demands, the letter he wrote them in disappeared from view on his website. On Tuesday afternoon, music fans could still listen to “Heart of Gold,” “Rockin’ in the Free World” and other such hits on the popular streaming site.

Unfortunately for Neil Young, it’s “the needle and the damage done,” for his views on forced vaccination and free speech. Spotify is not removing Joe Rogan. They are removing you.