‘This is Not a Negotiation’: Fed-Up Parents Serve Stunned School Board $200 Million Lawsuit Over Mask Mandate 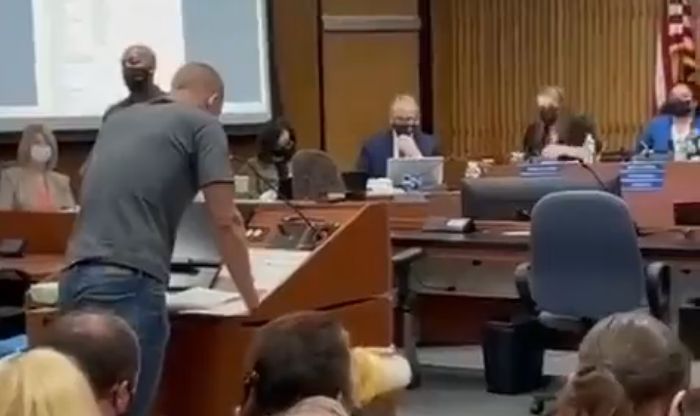 One could feel the tension at a Clark County School District board meeting as one fed-up dad spoke for a group of fourteen parents while serving a $200 million lawsuit over mask mandates. Watch:

“This is segregation based off of your own fears and your own personal interests,” the unidentified father argued. “The people in this country have had enough, and we are fighting back.”

“I have something to give you,” he then said. “Security, would you do me a favor? Would you please hand those forms to the board members? You’ve been officially served a $200 million lawsuit with six complaints and violations or multiple amendments.”

“Your job is not to be concerned with the children’s health,” he added. “You’re not nurses. You’re not doctors. You are not responsible for their health organization. Your only focus is on our children’s education, and the education system here is 50th in the state, and you make almost more money than anybody else.”

“It is very clear that you have failed in doing that job,” he said. “This country is not alone. It’s time that we wake up. Now, we’re gonna do a lawsuit after lawsuit after lawsuit. We can throw it out as much as you want. We’re gonna keep this paperwork on your desk and keep the problem going until we get exactly what we want.”

“This is not a negotiation, we will have our freedom of choice, and we’re gonna see you in court,” he added to applause.

The lawsuit was served in late September, and was reported by the Las Vegas Sun.

“Another set of parents has sued the Clark County School District in federal court to eliminate its coronavirus pandemic mask mandate,” the Las Vegas Sun reported. “They want $200 million in damages and criminal charges for top district officials.”

“Fourteen plaintiffs, with 18 children between them, said in the suit filed Monday in U.S. District Court in Las Vegas that the school board and CCSD Superintendent Jesus Jara ‘blatantly and maliciously’ violated the Constitution with the requirement,” the report continued.

“Plaintiffs’ children have constitutionally protected interests in the benefits that come from them not being subject to the Board’s mask mandate, including the ability to pursue an education without being subjected to health risks that are not offset by any scientifically provable benefits,” the parents argued in the complaint.

“The parents, who are representing themselves, claim violation of due process rights and allege that Jara and the school board committed felony threats ‘to injure a person’ because masks have been ‘scientifically proven’ to cause physical and mental harm,” the report added.

Mask mandates have not been shown to be effective at curbing the spread of Covid-19. A study came out this week that showed there was no statistically significant difference in Florida between school districts that followed the law and allowed mask choice and those that illegally imposed a mask mandate.

Even setting aside the scientific arguments for the moment, one can witness the relief of one boy who was informed by his mother that a group of unidentified parents won a lawsuit against the mask mandates.

That really just says it all.