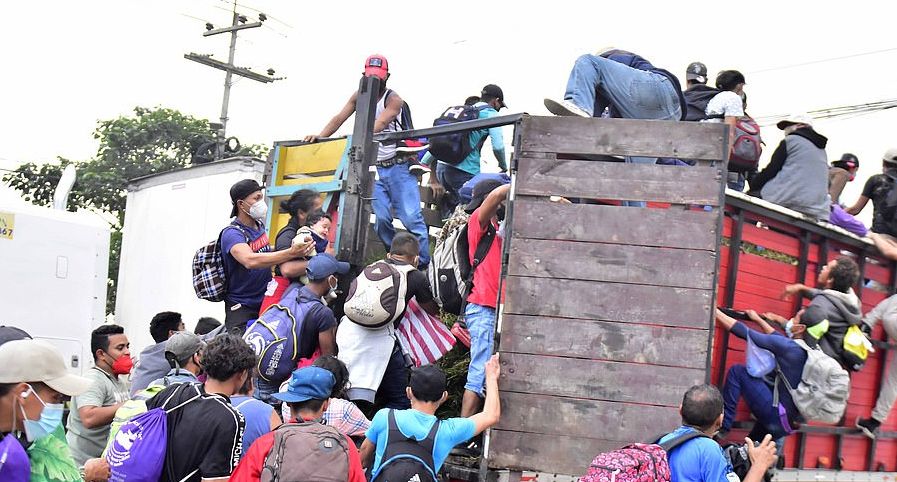 While Biden’s border crisis worsens, the influx of illegal immigrants into the United States appears only to be increasing.

On Monday, U.S. Customs and Border Patrol reported that they had recently stopped three separate migrant caravants and had apprehended hundreds of illegal immigrants.

“In total, the three groups consisted of nearly 300 family members and unaccompanied alien children, single adults rounded out the rest of the groups,” the report continued. “Agents determined the subjects are citizens of El Salvador, Honduras, Guatemala, Nicaragua, Mexico, and Belize.”

Now comes the truly stunning figure: There have been approximately 25 such caravans stopped by Border Patrol agents this calendar year.

“RGV agents have encountered 25 groups of more than 100 people illegally entering the country this calendar year,” the Border Patrol announced. “March has been a very active month for RGV, as illegal alien apprehensions thus far have surpassed February’s total number.”

“Even with the spread of the COVID-19 virus, human smugglers continue to try these brazen attempts with zero regard for the lives they endanger nor to the health of the citizens of our great nation. The U.S. Border Patrol agents of the Rio Grande Valley Sector will continue to safeguard the nation and community against these criminal elements,” the report added.

In January, the Biden administration had advanced warning that caravans of illegal migrants were heading to the United States.

“Thousands of migrants from Honduras headed to the U.S.-Mexico border have entered Guatemala, setting up what could be the first real challenge of the Biden presidency, according to The New York Times,” the Daily Beast reported. “Officials estimate that the caravan now has between 7,000 and 9,000 people who are not being tested for COVID-19 along the way. President-elect Joe Biden has pledge to ease some of the tough immigration restrictions set by the Trump administration, but he has not officially commented on the current caravan.”

That is a test the Biden administration is failing tremendously.

Former Customs and Border Patrol Acting Commissioner Mark Morgan issued a warning in early January to those seeking to enter the U.S. by caravan, prior to Morgan being replaced by the Biden administration.

“As rumors circulate of another migrant caravan movement forming in Honduras, I would like to send a clear and firm message to those considering joining,” Morgan said. “Do not waste your time and money, and do not risk your safety and health. The dangerous journey both puts you in harm’s way and endangers the lives and health of those in the U.S. and regional countries through the potential spread of COVID-19.”

“This is a deadly journey – the U.S. Border Patrol recovered more than 250 bodies along the U.S.-Mexico border last fiscal year,” Morgan continued. “We saw two deaths just last week, when smugglers abandoned dozens of migrants in a winter storm that dumped two feet of snow near Big Bend, Texas. These smugglers are reckless with human life – they do not care for the safety of migrants or law enforcement.”

Despite the Biden administration’s denials, its policies are fueling the rampant uptick in border crossings and unaccompanied minors coming to the United States.

“The number of migrant family members caught crossing the southwest border more than doubled between January and February — rising from 7,000 to nearly 19,000, according to the most recently released agency data,” Axios reported.

In addition, there has been a surge of unaccompanied minors being detained by ICE, a practice that was derided under the Trump administration as putting “kids in cages.” The number of migrant children in U.S. custody has passed 15,000, CBS News reported on Saturday.

“Records reviewed by the network showed that the government has about 15,500 unaccompanied migrant minors in U.S. custody,” the Hill reported. “Over 5,000 unaccompanied minors are currently held in a tent holding facility run by Customs and Border Protection (CBP) and other stations along the U.S.-Mexico Border as of Saturday morning.”