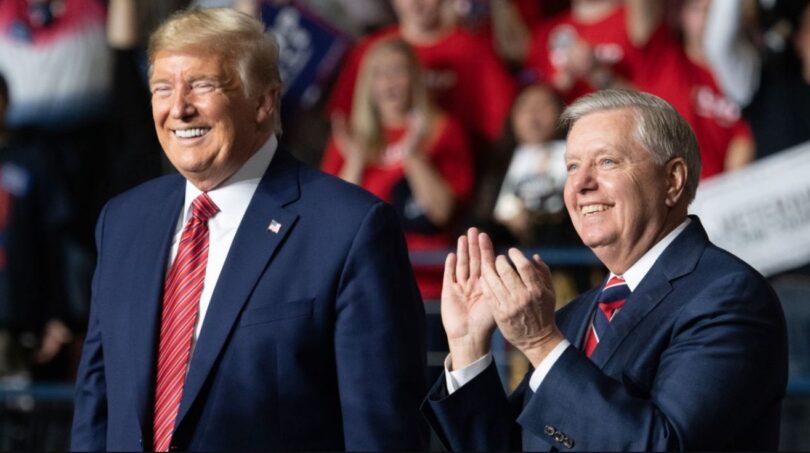 Senator Lindsey Graham appeared on Fox News primetime constantly in the run-up to the 2020 elections and gave nothing but full-throated support to then-President Donald Trump.

Behind-the-scenes, however, Graham was far from being an “ultra-MAGA” supporter. New audio obtained by CNN in the aftermath of the Capitol Riots on Jan. 6 reveals he ‘backstabbed’ Trump. Listen:

“We will actually come out of this thing stronger,” Graham said. “Moments like this reset. It’ll take a while. People will calm down. People will [say] ‘I don’t want to be associated with that.’ This is a group within a group. What this does, it’ll be a rallying effect for a while, where the country says, ‘We’re better than this’.”

“And Biden will be better, right?” NY Times reporter Jonathan Martin asked him.

“Totally, he’ll be maybe the best person to have, right?” Graham replied. “I mean, how mad can you get at Joe Biden?”

Thus, Senator Graham was giving his quiet support to Joe Biden as the next President of the United States, rather than working hard behind the scenes to support Donald Trump.

CNN obtained the audio from New York Times reporters Jonathan Martin and Alexander Burns who are the authors of the new book: ‘This Will Not Pass: Trump, Biden, and the Battle for America’s Future.’ Martin interviewed Graham on the day of the Jan. 6 riots.

“He’s misjudged the passion, he plays the TV game and he went too far here,” Graham also says in the clip. The South Carolina senator also criticized Trump’s rally on Jan. 6 for creating a sense of “revenge” towards critics like Rep. Liz Cheney (R-WY).

On TV, however, one might say Graham went too far showing support for Donald Trump, which looks remarkably hollow in the light of such audio. However, Trump supporters already knew that Graham couldn’t be relied on from his days heading the Senate Judiciary Committee, where he did virtually nothing to hold “deep state” actors for carrying out illegal campaign surveillance on the Trump campaign.

Senator Lindsey Graham is now completely exposed as a closet anti-Trump political operator. It will be interesting to see if South Carolina voters hold that against the senator.