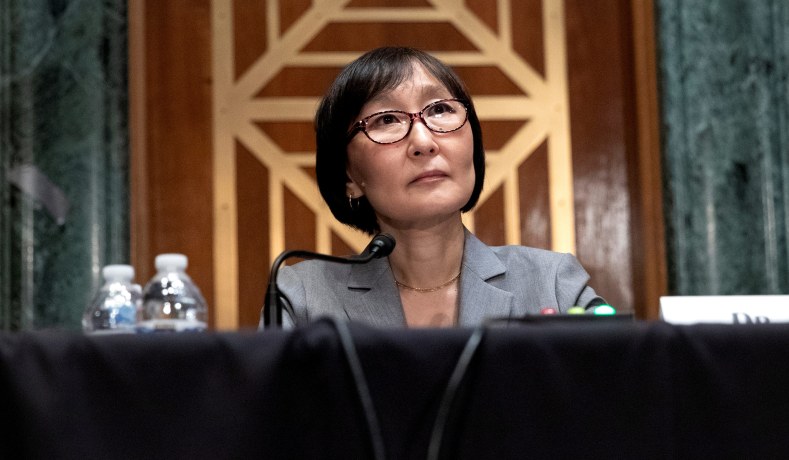 Saule Omarova, the Lenin-award-winning scholar who did a Master’s thesis on Marxist economics that she refused to turn over, and who floated the idea of eliminating private banking in the United States (no, seriously), will be scrubbed in Stalinist fashion from the history books due to five defections on the Democrat side of the U.S. Senate.

“Five Senate Democrats told the White House late Wednesday they will not support Lenin scholarship recipient Saule Omarova to serve as Comptroller of the Currency, nuking her chances to serve as the country’s bank regulator,” Chuck Ross of the Washington Free Beacon reported.

“The Democrats—Sens. Jon Tester (D., Mont.), Kyrsten Sinema (D., Ariz.), Mark Kelly (D., Ariz.), Mark Warner (D., Va.), and John Hickenlooper (D., Colo.)—join all Senate Republicans in opposition to Omarova, who came under scrutiny over her proposals to use the banking system to ‘bankrupt’ the oil and gas industry and her education in the Soviet Union. Axios reported Wednesday that the Democrats informed the White House they will not support Biden’s nominee.”

The writing was on the gulag wall last week after a bruising struggle session in the U.S. Senate, where her chances were effectively ‘nuked.’

“Republican senators took turns describing her as a communist, a socialist and a radical on Thursday, but it was the circumspect stance of moderate Democrats that spoke loudest about Saule Omarova’s prospects for becoming one of the country’s top banking regulators,” the New York Times noted.

“Ms. Omarova, President Biden’s pick to lead the Office of the Comptroller of the Currency, has faced steep opposition from industry groups and Republican lawmakers, with critics at times suggesting that her birthplace — the former Soviet republic of Kazakhstan — and her education in Moscow were reason to be suspicious of her,” the Times disingenuously commented.

It wasn’t the birthplace or the Moscow education that caused Senators to be suspicious as much as Ms. Omarova’s brazenly Marxist ideas, which would effectively destroy the U.S. capitalist system entirely if implemented. Radio Free Europe gave a glimpse at her educational background.

“Omarova is a controversial pick. Born in the Kazakh S.S.R. in 1966, she attended school in the provincial town of Oral (known in Russian as Uralsk),” RFERL said. “After excelling in school, she studied philosophy at Moscow State University, winning a V.I. Lenin Scholarship for academic excellence. Her career trajectory took a dramatic turn in December 1991 when the Soviet Union collapsed while Omarova was on a university exchange in the United States.”

“The young Kazakh was able to stay on in Wisconsin to complete her PhD in political science, then embarked on a successful career in law and academia,” the report continued.

In a 2020 interview, Omarova said of her departure from the U.S.S.R.: “Frankly, to this day, I kind of feel guilty for having left the country at such a momentous time,” and joked, “because obviously they couldn’t hold it together without me.”

Yet, even her purported vowing to embrace American capitalism at her Senate non-confirmation hearings didn’t save her.

“I fell in love with this country and its people from Day 1,” she said, praising the United States’ “dynamic and diverse markets.”

As she came under attack for her intellectual views, she used the familiar card that all radical Democrats use: Her identity.

“I am an easy target,” she said. “An immigrant, a woman, a minority. I don’t look like your typical comptroller of the currency. I have a different history. I am easy to demonize and vilify.”

Saule Omarova then swore before the U.S. Senate that “I am not a communist.” Spoken like a true communist.

Dasvidaniya, comrade. We hardly knew you.

Hillary Clinton Tells the World Exactly What the Radical Left is Doing to America: ‘There is a Plot Against the Country’