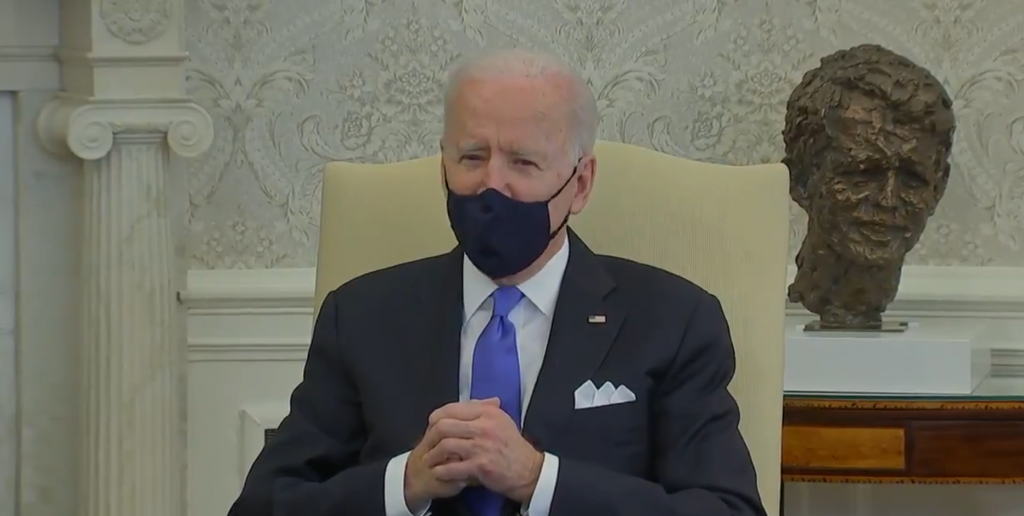 President Joe Biden lashed out against Texas and Mississippi for their orders freeing their citizens from unlawful lockdown decrees and mask mandates.

“I think it’s a big mistake,” Biden said. “These masks make a difference.”

There is actually no evidence that masks worn by the general public make any statistically significant difference slowing the spread of COVID.”

“We are on the cusp of being able to fundamentally change the nature of this disease,” Biden continued. “Because of the way which we were able to get vaccines … we’ve been able to move that all the way up to the end of the May. We have enough for every Amercan, every adult American, to get a shot,” he said.

“The last thing we need is Neanderthal thinking,” Joe Biden said. “That, in the meantime, take off your mask, forget it. It still matters.”

“I carry a card,” he added and reached into his pocket, only to find nothing there, “I don’t have it, I put it on my desk. As of last, as of yesterday, we have lost five hundred eleven thousand eight hundred seventy four Americans.”

Texas Governor Greg Abbott made the announcement yesterday that the state will effectively be returning to America again.

“So today, I am issuing a new executive order that rescinds most of the earlier executive orders,” Abbott said. “Effective next Wednesday, all businesses of any type are allowed to open 100 percent.”

“That includes any type of entity in Texas,” the governor continued. “Also, I am ending the statewide mask mandate.”

The State of Mississippi followed Texas’ lead and will reopen the state’s businesses and remove the mask mandates.

Mississippi Gov. Tate Reeves announced the state is effectively going back to being America again.

“Starting tomorrow, we are lifting all of our county mask mandates and businesses will be able to operate at full capacity without any state-imposed rules. Our hospitalizations and case numbers have plummeted, and the vaccine is being rapidly distributed. It is time!” he tweeted.

If the President is going to accuse state governors that respect individuals’ rights and make policy decisions based on actual evidence of “Neanderthal thinking,” he might want to make sure he gets his math right. It helps to carry the card with your script on it.