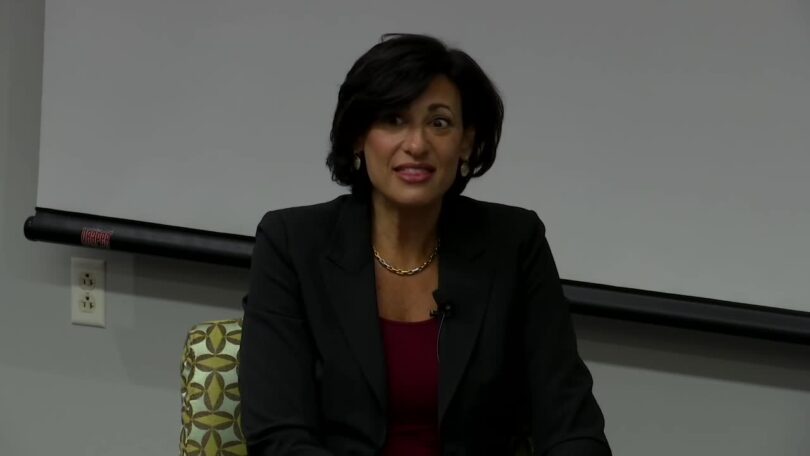 The Centers for Disease Control and Prevention has been at the forefront of the Covid-19 pandemic since the very inception. The CDC was deified as the ultimate arbiter of Covid facts and fictions in the mainstream media and by Big Tech.

Its “guidance” was used as a rationale by governors and mayors around the country to pre-empt the democratic and legislative processes that are the foundations of American governance. The CDC’s advice was held up as evidence that authoritarian mandates needed to be issued under “emergency” powers the government granted to itself.

So, when CDC Director Rochelle Walensky this weekend gave a talk at her alma mater, the Washington University School of Medicine at St. Louis, she discussed the “lessons learned” from the Covid pandemic in a frank and humble manner that does not comport with the magisterial powers bestowed on the agency by the United States media.

Indeed, there are many Americans who might find the actual talk downright infuriating. Watch:

The CDC Director makes a number of confessions of the actual science that got American citizens censored, banned, or deplatformed for saying on social media. However, since Walensky is ostensibly one of the privileged elite, she is ‘allowed’ to reveal the many ways that she was mistaken or otherwise changed her mind as more data and information came in.

One of the most striking moments is when the CDC director effectively confessses that the agency is not the final authority on “the science.”

She continues: “I have frequently said ‘we’re going to lead with the science’…I think public heard that as ‘science is foolproof. Science is black and white.’…The truth is science is grey. And science is not always immediate.“ pic.twitter.com/lQCvoKjFp8

“Nobody said ‘waning’ when this vaccine is going to work, ‘oh well maybe it’ll wear off.’ Nobody said ‘well, what if…it’s not as potent against the next variant,’” she claimed. “I have frequently said ‘we’re going to lead with the science’…I think public heard that as ‘science is foolproof. Science is black and white.’…The truth is science is grey. And science is not always immediate.”

This is the CDC Director driving a stake through the “science is settled” narrative. Not one peep is being uttered about it in the mainstream media. Below is her full quote.

Then there is her admission that the vaccines were not America’s ticket out of the pandemic, the way that the mainstream media portrayed it, and continues to portray it today in ignorance of the fuller context.

“And then maybe the other thing I’ll say ‘is this area gray?’ I have frequently said, you know, ‘we’re going to lead with the science. Science is going to be the foundation of everything we do.’ That is entirely true. I think public heard that as ‘science is fool proof, science is black and white, science is immediate’ and we get the answer and then we, you know, make the decision based on the answer.

“And the truth is science is gray and science is not always immediate. And it, sometimes it takes months and years to actually find out the answer. But you have to make, you know, decisions in a pandemic before you have that answer.”

It should be noted that CNN reported that the Pfizer-BioNTech vaccine was 95% effective at preventing COVID-19 in November 2020, when Dr. Rochelle Walensky was a professor at Harvard Medical School and head of the infectious diseases division at Massachusetts General Hospital. Not that it makes her quote any less damning.

Yet, the public deliberation aspect of the Covid pandemic response was completely ignored, as damaging and futile mandates were implemented by emergency decree without even being debated in the legislatures. This is unacceptable, and no amount of media spin will change that.

There are other serious issues with CDC Director Walensky’s statements.

“So I think that there, we have a lot of work that we need to do,” she said. “I’m proud to say that in April, just weeks after coming to the CDC, we at CDC declared racism a serious public health threat, and in doing so over 200 public health departments around the country have followed suit. So we’ve made a lot of progress in people knowing and focusing that this was an issue that we needed to work on. I have challenged our agency specifically. I have said to our agency, ‘we have a new strategy for health equity and said, you know, we have spent a lot of time documenting a problem in health equity. You don’t need to look very far to say it’s true in maternal mortality. It’s true in chronic diseases, it’s true in access to care.”

Rochelle Walensky’s conflation of race and economic income as metrics that bear on health delivery is an illegal, immoral and frankly racist standard that has nothing to do with her job preventing infectious diseases. The Biden administration had been rebuffed by courts for using similar race-based guidelines when it came to the Small Business Administration. Furthemore, the CDC was rebuked by the Supreme Court for overreaching on its authority by implementing a rent moratorium.

Walensky’s comments underscore that the CDC failed to stick to its original mission of attending to the actual medical science of the pandemic and assessing scientific claims with scrutiny based on hard scientific evidence. Instead, it issued politicized statements about racial equity, and attempted to unilaterally make policy. The abysmal track record is one that has led to a devastating erosion of trust in the agency.

Walensky also talked about the rampant mental illness and job loss that has come about in part due to Covid policies, such as mask and vaccine mandates.

Right. And the CDC played a tremendous role in causing millions of people to lose jobs. States and districts that followed the CDC’s guidelines closely are now among the worst in the country when it comes to unemployment: Connecticut, Illinois, Michigan, New Jersey, Nevada, Maryland, New York, Alaska, Pennsylvania, California, New Mexico and the District of Columbia.

Walensky then assumed her talk was in a “safe space” to actually be honest with the people she’s talking to. And she was honest. Her rhetoric doesn’t match with the still incessant effort to force Americans to get vaccinated, despite any natural immunity from prior infection, regardless of age and relative risk, and even at the potential expense of someone’s job.

“So, I’m, this is a safe space because every piece of advice I’ve gotten is ‘don’t predict what’s going to happen.’ So, I have no idea what’s gonna happen. But you know, when I think about what the years ahead look like, and I don’t even mean the months ahead, I think that overall, all our immunity is going to hold us in good stead. I don’t know whether we’re going to need another boost and I don’t know when and I don’t know what that’s going to look like, but I do think ultimately we will have good level population immunity for variants that come our way. And that even if amplitude surges come, the amplitudes of those just will be less. And that ultimately we will have a coronavirus that will, you know, it will lead to death and some people every season and that we will then tolerate in some way.”

“I do think life may change,” she went on. “We were having this conversation yesterday about mask wearing and whether we in hospitals will be wearing masks, you know, the way we wear gloves after the HIV. After HIV… and my husband’s a pediatric oncologist, will he ever go into a bone marrow transplant room without a mask on the way he used to? So, you know, I think that there will be things that we learned here. I mean, I haven’t had a cold in a really long time, and I suspect that we don’t miss those. So I, you know, I think we’ve learned something here.”

The Washington University School of Medicine’s website provided a glowing, uncritical and unserious overview of Walensky’s talk that does not nearly go far enough in depicting the mea culpas that are strewn throughout.  The full interview is provided in a rough transcript below. It bears reading in its entirety.

Rochelle Walensky Talk at Washington University School of Medicine at St. Louis on March 3, 2022 by Kyle Becker on Scribd