Donald Trump is moving forward with a big plan for America. Being dubbed the “America First” agenda, it is drawing favorable comparisons to the 1994 “Contract with America,” which was a major reason for one of the Republican Party’s most successful congressional elections in modern history.

The former president has been busy with his political plans and has met with several Republican Party officials recently who have come to “kiss the ring” in Mar-a-Lago.

“The party chairwoman, the top two House Republicans, the senior senator from South Carolina and a coterie of other former aides and advisers have all made appearances at Mar-a-Lago, offering their counsel and seeking the favor of a former president who many believe controls the short-term fortunes of GOP candidates up and down the ballot — and has made it clear he plans to use that power,” the Washington Post reported on Saturday.

As reported earlier here, Donald Trump has been getting ready to go to “war” with the Republican Party.

“According to three people familiar with the planning, Trump will soon begin vetting candidates at Mar-a-Lago who are eager to fulfill his promise to exact vengeance upon incumbent Republicans who’ve scorned him, and to ensure every open GOP seat in the 2022 midterms has a MAGA-approved contender vying for it,” Politico reported.

The goal of this “war,” however, is to purge weak Republicans and get victories for those candidates who are serious about reforms.

“President Trump was committed to the Republican Party, not only that, he wants to make sure the Republican Party win back the House of Representatives and the US Senate in 2022,” Senior Trump advisor Jason Miller said in an interview with Sky News in Australia.

There are now details about what this process entails: A Trump-backed plan that is being compared to the 1994 “Contract with America,” which the Gingrich-led Republicans used to secure a “red wave” election.

Trump “discussed drafting a new ‘America First’ agenda — like the 1994 ‘Contract with America,’ but focused on issues such as border security and trade — to steer the party’s direction,” the WaPo report cited per South Carolina Senator Lindsey Graham.

“He is going to be very involved,” Graham said.

The ‘America First’ agenda’s focus on border security and trade would prove similar to the populist agenda that Donald Trump rode to victory in 2016. And while Biden miraculously eeked out a victory with improbable victories in key swing states, the Republicans cleaned House and threatened even take the lower Chamber of Congress and probably should have retained the U.S. Senate. The GOP took all 27 “toss up” districts up to now, in addition to seven seats that were “likely Democrat.” The Republicans flipped 15 seats and gained 12 seats. 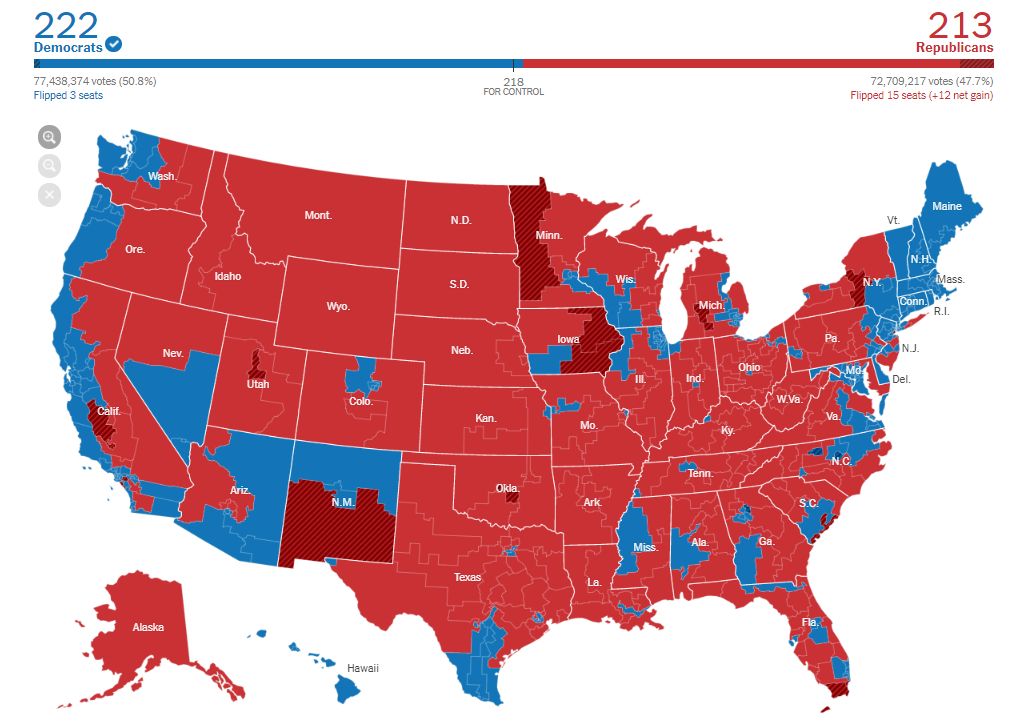 This “red wave” came amid confirmation that Donald Trump was not an “anchor” but a bouy for political candidates. In addition, the Republicans maintained control of many key state legislatures.

If you are confused by the Republicans’ widespread strength and Trump’s solid performance in red states, in addition to Florida and Ohio, but the rabid, astronomical turnout in just a few major Democrat-controlled metropolitan areas, you’re not alone. But the formidable showing in the 2020 House races show that a flip of Congressional control should be had.

The populist ‘America First’ agenda being drafted comes at a time when there is more at stake for the country than under the political opportunist Bill Clinton. The Biden administration, whomever is running it, has been issuing radical, jobs-destroying executive orders at a rapid clip. After just one month of the Biden presidency’s “America Last” agenda, voters are longing for a clear sense of a different direction. The “direction of the country” polling now suggests the honeymoon is already over for Biden.

Thus, the electorate should be primed to back an ‘America First’ agenda. The comparable 1994 ‘Contract with America’ was instrumental in a historic Republican Party victory, as the History Channel notes:

A balanced budget amendment. Tax cuts. Welfare reform. Those were just three of the 10 points of the Contract with America, Newt Gingrich’s conservative plan, signed by 300-plus Republican candidates and presented at a press conference just six weeks before the 1994 midterm elections.

The proposal by Gingrich, then Speaker of the House, has been credited with the “Republican Revolution” that ensued at the polls, with the GOP easily taking control of the U.S. House and Senate, gaining 12 governorships and regaining control in 20 state legislatures.

The significance and messaging for the ‘Contract with America’ was noted recently by Roll Call after its 25-year anniversary in 2019.

Newt Gingrich “embraced the idea that voters want something to vote for, not simply a reason to vote against the other candidate or party,” David Winston writes. “The contract was more doctrine than a communications message. It offered voters change that could actually happen and would work. It was a realistic, doable political document that served as an organizing principle for a radical change in campaign strategy.”

Winston notes that “1994 was all about issue content and political context for candidates and voters,” and that “it gave candidates the ability to talk in national terms about bigger picture issues and gave the party consistency across districts.”

“It also helped the party develop the financial resources to win the kind of historic victory Republicans would need to take control of the House,” he concludes.

The establishment GOP, whom Trump has been threatening to primary, appears to have gotten the message that Trump is indispensable to their election efforts. The recent public opinion polling on Donald Trump, even after the concerted effort by the likes of Liz Cheney, Mitt Romney, Ben Sasse, and other Never-Trump Republicans to destroy him with the Senate impeachment trial has shown that it has only made him stronger.

“Fifty-four percent said they would vote for the former president to run again in 2024, should he opt for a second term in the White House,” Newsweek noted.

The connection between Donald Trump and millions of Republican Party members is not even merely contingent on him being the party nominee. Trump could hypothetically split the party support in half if he decided to run independent or even form his own political party.

“If Trump formed a third party, 46% would support the Trump Party,” Fox 5 reported on a Suffolk/USA Today poll. “Only 27% of the Trump supporters say they would back the Republican Party.”

It gets even more precarious for the Republican Party.

Senate Minority Leader Mitch McConnell is now understandably willing to let bygones be bygones, along with former Vice President Mike Pence. Pence seems poised to launch an organization defending the successful Trump-Pence record, while McConnell isn’t even hesitating to say he will back Trump if he is the 2024 presidential nominee.

When asked on Fox News if he would support Donald Trump if he were the Republican Party nominee in 2024, he didn’t even hedge with his response.

“The nominee of the party? Absolutely,” Mitch replied.

Donald Trump’s stamp of imprimatur on an “America First” agenda for the Republican Party could seal sweeping victories in the 2022 mid-term elections.