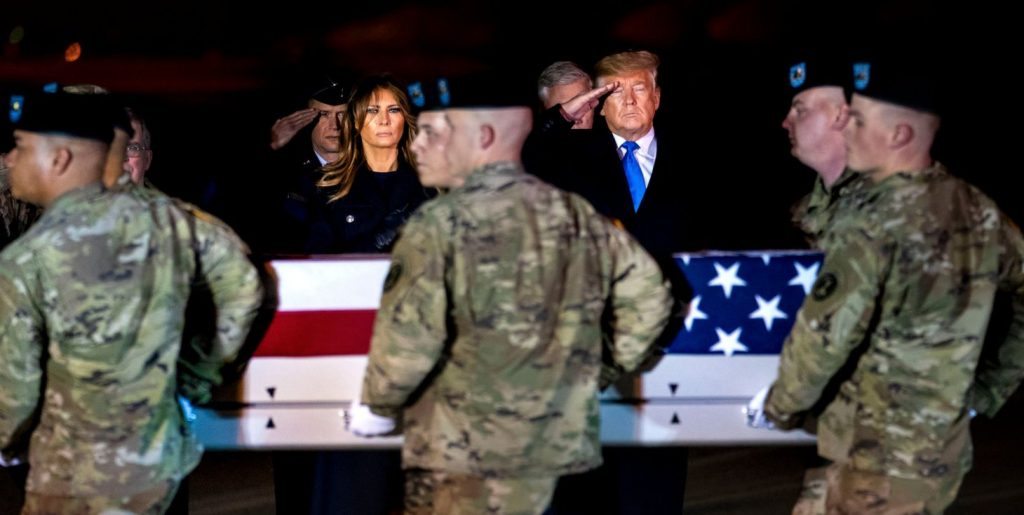 All eyes in America are fixed on Dover Air Force Base, where 13 U.S. service members are expected to receive a dignified transfer on Sunday. Mourning families of the fallen, as well as the president and first lady, are scheduled to meet them.

This year, former President Donald Trump spoke on the heartbreaking affair that takes place behind the scenes and away from the cameras when the military caskets arrive. He told the gutwrenching story at the North Carolina GOP state convention in June. Watch:

“I’d visit soldiers at Walter Reed Hospital, where the doctors are truly fantastic, what they can do,” he said. “I’d see these young people who were blown to pieces, and it’s, it’s just so sad.”

“I’d be at Dover where these magnificent machines, the big cargo planes, and that door would open up and there’d be a coffin in the back. And the military soldiers would take that coffin and walk it off the plane.”

“And I’d be with the parents, an hour before, and we’d be talking,” he went on, “And I’d say to the general in charge, ‘General, the parents seem to be okay’.”

“And he’d say, ‘no, they’re not, sir, they’re not okay’,” Trump continued. “I’d say, ‘General, I’m having a great conversation,’ and the mothers oftentimes would say, ‘oh, my son was such a great football player, sir, he had an arm that was so powerful, he was so strong, he could throw a ball so far, he was such a good player’ or other things.”

“They’d tell me these stories about… they were just so in love with telling the stories about their son or their daughter,” he said. “In some cases, their daughter. And then, I’d look at the General and say, ‘Well, it’s amazing the way they can handle it’. And then the plane would come in and the general would say, ‘Sir, it’s not going to be good’.”

“And that door would open up, that big back door, right?” he continued. “Would open up from this incredible powerful machine that can lift up Army tanks like it’s nothing. And it would open up. And there would be one or two or three or four coffins. And I’d see the same people who were talking to me, so jubilant about their child, how great the child was, would start screaming. Screaming.”

“Screams like I’ve never heard before,” he said. “It was the most terrible thing to watch.”

“The General in charge would say, ‘Sir, you’re going to see things that you maybe will not have seen.’ ‘Like what General?’ He said, ‘mothers and wives and even fathers sometimes breaking in through the military ranks and jumping on top of the coffin’.”

“And I got to see that one time,” Trump continued. “Where a mother was so, just, she was just absolutely, she was devastated. She jumped on and these incredible, extremely fit soldiers are taking that coffin, and would jump onto the coffin. And they would just keep walking, they wouldn’t do a thing. They would just keep walking. And the mother was on the coffin. And this is for Afghanistan, and for Iraq, and for these other places, where so many mistakes were made, where we shouldn’t be. And we can’t do that. We’re moving them out. We’re moving them back.”

Sadly, the same can’t be said of the Biden administration. On Thursday, 13 U.S. service members were killed in multiple suicide attacks. It marked the first casualties in the long-running conflict since February 2020, and the highest death toll in the war in a decade.

“Well, I hope you get arrested tonight. What else can I say?”

Trump Does Victory Lap over Historic SCOTUS Decision: ‘The Biggest WIN for Life in a Generation’

“I will never stop fighting for the Great People of our Nation!”

Biden Blames Trump for Supreme Court Decision: ‘The Health and Life of Women in this Nation are Now at Risk’

… Read More »Biden Blames Trump for Supreme Court Decision: ‘The Health and Life of Women in this Nation are Now at Risk’

Maxine Waters Explodes After SCOTUS Abortion Decision: “To Hell with the Supreme Court, We Will Defy Them!”

“They ain’t seen nothing yet,” Waters railed. “Women are going to control their bodies no matter how they try and stop us. To hell with the Supreme Court!”