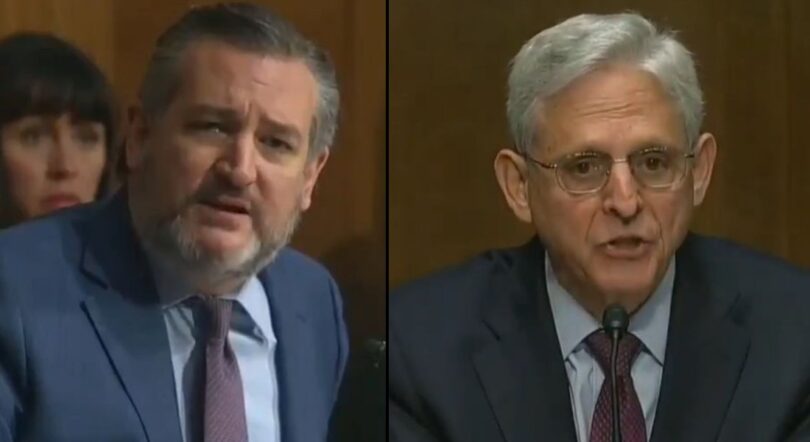 Senator Ted Cruz unleashed a furious response to Attorney General Merrick Garland at a Senate hearing on Wednesday over the Department of Justice deploying the FBI to investigate purported “domestic terrorist” parents. Watch:

“How many incidents are cited in that memo?” Cruz asked.

“I have to look back through the memo…” Garland responded.

“You don’t know. How many of them are violent?” Cruz continued.

“How many of them were violent? Do you know?” Cruz asked again.

“You don’t know. There is a reason you don’t know,’ Cruz retorted. “Because you didn’t care and nobody in your office cared to find out.”

“I did a quick count just sitting here,” he continued. “During this hearing, I counted twenty incidents cited. Of the twenty, fifteen on their face are non-violent. They involve things like insults. They involve a Nazi salute. That’s one of the examples.”

“My God! A parent did a Nazi salute at a school board because he thought the policies were oppressive,” Cruz railed. “General Garland, is doing a Nazi salute at an elected official, is that protected by the First Amendment?”

“Yes it is,” Garland replied.

“Okay,” Cruz replied. “Fifteen of the twenty on the face of it are not violent.  They are not threats of violence. They are parents who are unhappy.”

“Yet, miraculously, when you write a memo, the opening line of your memo, ‘in recent months, there has been a disturbing spike in harassment and intimidation and threats of violence’,” Cruz noted.

“Do you know what?” he continued. “You didn’t look and nobody on your staff looked. Did you even look up the twenty instances?”

“As I testified, the decision to make – to send the memo is for an assessment,” Garland responded.

“Did you look up the twenty instances?” Cruz pressed.

“Did anyone on your staff look them up?”

“But, of course, you don’t, and general there’s a reason,” Cruz added. “Look, you started your career as a law clerk to Justice Brennan. You have had many law clerks during the year – during your time as a judge. I was a clerk to Chief Justice Rehnquist.”

“I will tell you what. If I drafted an opinion for the Chief Justice, and I walked in, and said ‘there’s a disturbing pattern of violence,’ ‘Well, Ted, how do you know that?’ ‘Well, I got an amicus brief here that claims it.'”

“You would fire a law clerk who did that — you are the attorney general of the United States!” Cruz declared.

“This was not a tweet you sent. This is a memo to the Federal Bureau of Investigation saying go investigate parents as ‘domestic terrorists’!” Cruz added.

“That is not what the memo says at all,” Garland said.

But “domestic terrorisn and hate crimes’ is exactly the language used in the National School Boards Association Memo that it subsequently apologized for. However, the Attorney General has stood by his stance to deploy the FBI to investigate parents who are upset about such hot-button issues as Critical Race Theory and mask mandates at their children’s schools.

“The letter that was subsequently sent does not change the association’s concern of violence or threats of violence. It alters some of the language in the letter … that we did not rely on and is not contained in my own memorandum,” Garland said at the hearing,

Garland added that the DOJ is not only concerned about school board officials, but the alleged “rising tide” of violence against judges, prosecutors, election administrators, and others.

“The only thing the Justice Department is concerned about: violence and threats of violence,” he said.

The NSBA wanted the DOH to invoke the PATRIOT Act to investigate concerned parents, which is legislation that was drafted to target terrorists. The NSBS subsequently apologized, they “regret and apologize for the letter,” adding that “there was no justification for some of the language” in it.

“I assume you’re going to revoke your extremely divisive memo that you said was instigated because of that letter?” Senator Grassley asked Garland at the hearing.

Yet, Attorney General refused to retract the DOJ’s weaponization of the NSBA memo to go after concerned parents as suspected ‘domestic terrorists.’ As Senator Tom Cotton put it, “Thank God you are not on the Supreme Court.”