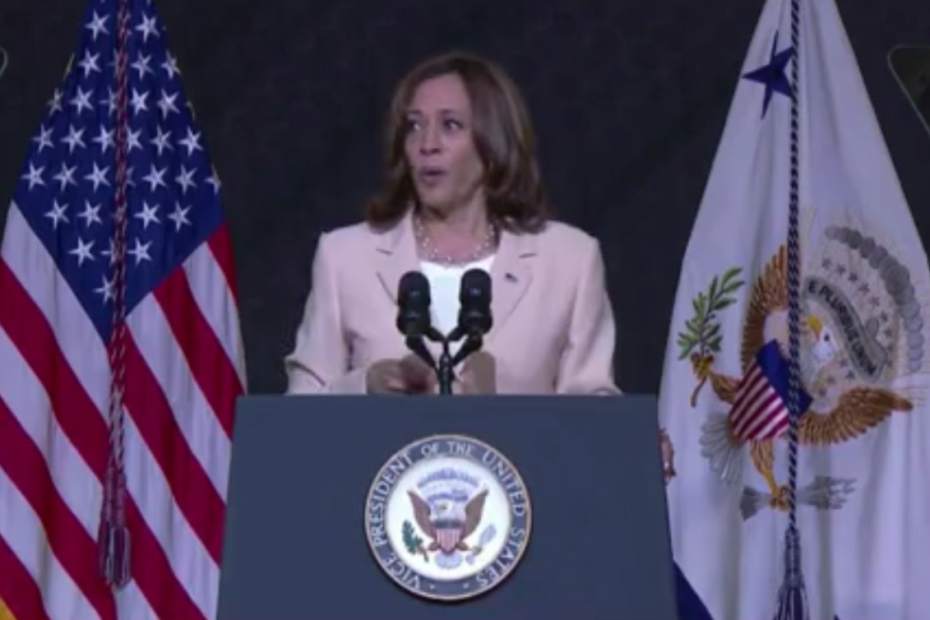 Vice President Kamala Harris on Monday compared the abortion of millions of black babies to the abominable practice of slavery that was abolished in the mid-19th century. Watch:

“We must also take steps to protect other fundamental freedoms, including the freedom for a woman to make decisions about her own body,” Harris said. “And, you know, on this subject, it’s important to note that to support a woman’s ability, not her government, but her, to make that decision does not require anyone to abandon their faith or their beliefs, it just requires us to agree the government shouldn’t be making that decision for her.”

“And think about it.,” she went on. “For the first time in generations the United States Supreme Court, the highest court of our land, the former court of Thurgood Marshall, took a constitutional right that had been recognized from the people of America, from the women of America. We know, NAACP, that our country has a history of claiming ownership over human bodies.”

In regards to comparing abortion to slavery, a word must be said about Planned Parenthood founder Margaret Sander. The Family Research Council gives a concise overview about the woman who became the champion for abortion in the United States.

“Sanger shaped the eugenics movement in America and beyond in the 1930s and 1940s,” FRC notes. “Her views and those of her peers in the movement contributed to compulsory sterilization laws in 30 U.S. states that resulted in more than 60,000 sterilizations of vulnerable people, including people she considered ‘feeble-minded,’ ‘idiots’ and ‘morons’.”

She recounted this event in her autobiography: “I accepted an invitation to talk to the women’s branch of the Ku Klux Klan … I saw through the door dim figures parading with banners and illuminated crosses … I was escorted to the platform, was introduced, and began to speak … In the end, through simple illustrations I believed I had accomplished my purpose. A dozen invitations to speak to similar groups were proffered” (Margaret Sanger, “An Autobiography,” Page 366).

“That she generated enthusiasm among some of America’s leading racists says something about the content and tone of her remarks,” FRC adds.

That Planned Parenthood has carried out millions upon millions of abortions in black communities speaks for itself.

“And today, extremist, so-called leaders are criminalizing doctors and punishing women from making health care decisions for themselves,” Harris continued. “Personal decisions, that is her right to make in consultation with her doctor, her pastor, her priest, her rabbi, her loved ones, not her government telling her what to do.”

“And the so-called leaders, so called, claim that well, you know, we just think that this is a decision that should be made by the folks in the States,” she went on. “People in the states can vote on this, right? But at this moment, many of those same so called leaders are the same ones who are passing laws to restrict the ability of people to vote. Laws, they’re passing laws, the same people, laws that ban dropboxes and restrict early voting, laws that make it illegal to give people food and water for waiting in line to vote. Undemocratic laws. un-American laws.”

Kamala Harris is, of course, wrong. Laws that restrict abortions after the first trimester poll as popular with most Americans. There is no express  Constitutional right to abortion, therefore, it is a State’s rights matter under the Tenth Amendment.

This is how America is meant to work. It isn’t “un-American,” it is quintessentially American.