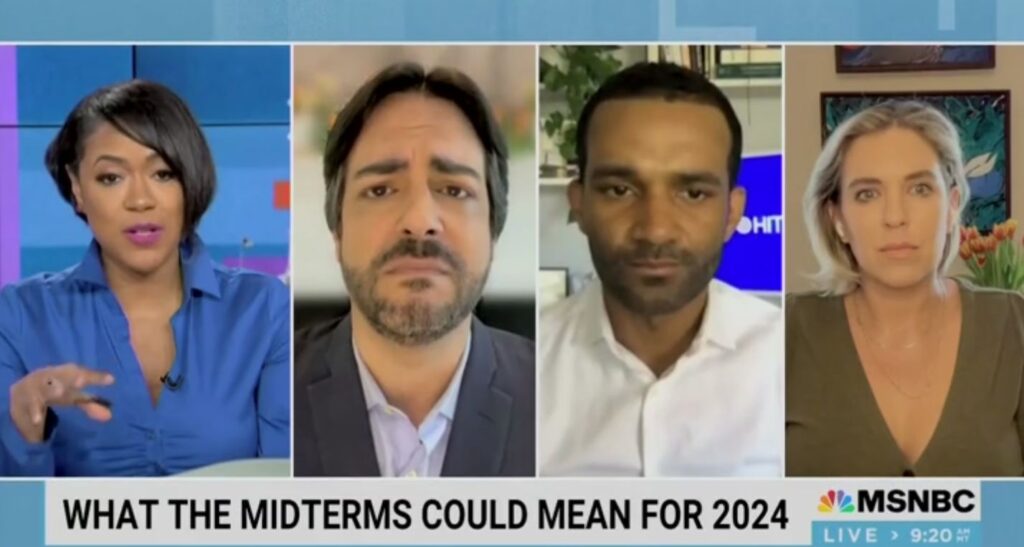 MSNBC is now openly wishing Donald Trump was back on the ballot — it’s gotten that desperate for Democrats ahead of the 2022 midterms. Watch:

“We really need to make that point to American voters out there because people are exhausted,” Cross aded. “And Terrence [Woodbury], I’ve looked at a lot of the data that Hit Strategies… in my inbox. You’ve talked to a lot of younger voters, but you also talk to voters across the spectrum. Do you feel that sense of urgency from voters this time around? Or are people like exhausted and wipe the sweat from their brow and they are not planning to participate. What’s your take?”

“That’s exactly right, Tiffany,” Democratic pollster Terrance Woodbury replied. “Morale is extremely low amongst the Democratic coalition. We are seeing cynicism and frustration with a perceived lack of progress on the progressive agenda. And the truth is Democrats have made significant progress on issues most important to Democratic base but they are not telling that story.”

Once again, the radical Democrats’ Alinskyite politics of personal destruction are on full display here. They may, hypothetically, win you a few elections through outright smears, lies and distortion, but that doesn’t mean Democrats know how to govern a country. (And they don’t.)

“The multiracial coalition, the surge that you spoke of in 2018, and that came back out in 2020, what united that surge was an anti-MAGA, anti-Trump, anti-racism sentiment that really started to bubble up in the summer of 2020,” he said. “We have to put Trump back on the ballot, but that does not mean that we get to make every Republican seem like Trump. It means that we have to literally explain that if Republicans win the House and the Senate in 2022, they will reinstall Trump in 2024.”

The Democratic Party is unable to promote policies that actually benefit Americans. All the party has is a corrupt coalition that loots the public coffers and the politics of personal destruction for anyone who gets in Democrats’ way. The Democrat-run media hate Donald Trump because he stood up to them — in much the same way they now hate Elon Musk for trying to take Twitter away from them.

But the polling data ahead of the midterms defies the radical left’s narrative about the Trump coalition that they characterize as racist, fascist, xenophobes. Indeed, not only is the anti-establishment, populist base that Donald Trump rode to victory (some would argue twice), they are now unexpectedly adding a huge new contingent: Hispanic voters.

The first concerning statistic is that Independents disapprove of Biden’s presidential performance by more than 2-to-1 (56-26). But even more concerning for Democrats in border states with high Hispanic populations, we are seeing a red flood jump from Democrat to Republican.

The Quinnipiac poll shows that 41 percent of Hispanics “disapprove strongly” of Biden’s performance, compared to 12 percent who “approve strongly.” Total disapproval among Hispanics is 54 percent to total approval of 24 percent.

An analysis of the results from Just the News showed that immigration was one reason that Hispanics was jumping off the Democrats’ sinking ship.

“Biden’s immigration policies appear to be one reason for the Hispanic migration away from the Democratic Party,” the Aaron Kliegman wrote. “Over the past year, polling has consistently shown a strong majority of Americans — and upwards of 70% of Hispanics — disapprove of Biden’s handling of immigration, including of the southern border.”

“The number of people crossing the southern border illegally has skyrocketed since Biden entered office, reaching nearly 2.3 million illegal border crossings from February of last year to this past February, the last month for which there’s publicly available data,” the report added. “By comparison, there were just over 626,000 such crossings from January 2020 to January 2021, former President Trump’s last year in office.”

The Biden administration disaster is not only adding up to a midterms bloodbath of monumental proportions — but a potential generational shift of Hispanics away from Democrats to Republicans. It’s gotten that bad.