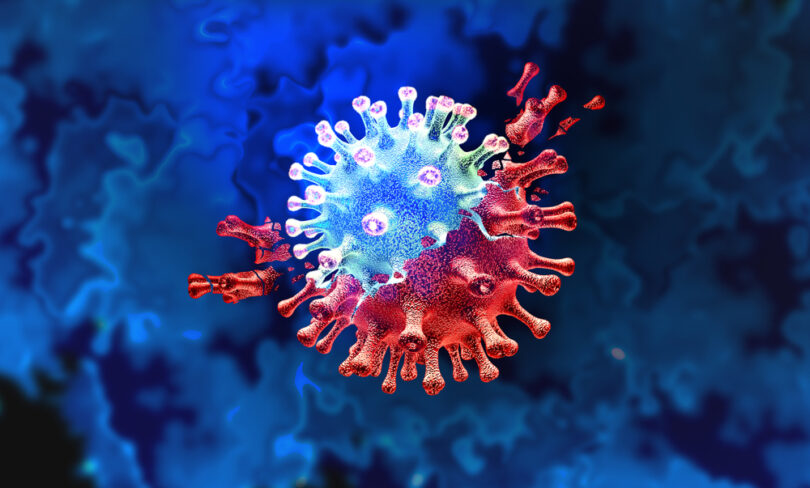 A new SARS-CoV-2 mutant strain that has been the ‘Omicron’ variant is already causing a devastating ripple effect around the globe. It was first identified in Botswana earlier in November, but it is believed to be fueling a present spike in cases in South Africa.

The Omicron variant, or B.1.1.529 variant, has been identified in Botswana, South Africa and Hong Kong so far. Scientists are feverishly working on the new mutant strain, which they have identified as the most ‘significant’ one yet.

“Researchers in South Africa are racing to track the concerning rise of a new variant of the SARS-CoV-2 coronavirus that causes COVID-19,” Nature reported. “The variant harbours a large number of the mutations found in other variants, including Delta, and it seems to be spreading quickly across South Africa.”

Ravindra Gupta, a professor of clinical microbiology at the University of Cambridge, said the new variant has a high number of spike mutations that could affect transmissibility and immune response.

“There’s a lot we don’t understand about this variant,” Richard Lessells, an infectious-diseases physician at the University of KwaZulu-Natal in Durban, South Africa, said at a press briefing. “The mutation profile gives us concern, but now we need to do the work to understand the significance of this variant and what it means for the response to the pandemic.”

“We’re flying at warp speed,” Penny Moore, a virologist at the University of the Witwatersrand in Johannesburg, South Africa, told Nature. Moore added that “at this stage it’s too early to tell anything” about the anecdotal reports of reinfections and of cases in vaccinated individuals.

The Pfizer-BioNTech vaccine is already under scrutiny for the waning efficacy of its mRNA prophylactic therapeutic, which has been marketed as a ‘vaccine’ for Covid-19. The pharmaceutic company, whose Comirnaty vaccine was ‘fully authorized’ for Covid-19 by the Food and Drug Administration was granted full liability shielding by the Biden administration. The so-called ‘vaccines’ have worn off so fast that the Centers for Disease Control is already recommending “boosters.”

Pfizer-BioNTech may be envisioning another way to pad its corporate profits, which have been driven sky high due in part to mandates and failed predictions, such as that the ‘vaccines’ would ‘stop the spread.’ The pharmaceutical giant is now considering a “future vaccine relaunch.”

“BioNTech SE said on Friday it expects more data on a worrying new coronavirus variant detected in South Africa within two weeks to help determine whether its vaccine produced with partner Pfizer Inc would have to be reworked,” Reuters reported.

“Pfizer and BioNTech said that if necessary they expect to be able to ship a new vaccine tailored to the emerging variant in approximately 100 days,” the report added.

“We understand the concern of experts and have immediately initiated investigations on variant B.1.1.529,” BioNTech said in a statement.

“We expect more data from the laboratory tests in two weeks at the latest. These data will provide more information about whether B.1.1.529 could be an escape variant that may require an adjustment of our vaccine if the variant spreads globally,” it added.

“Moderna Inc said in a statement it is working to advance a booster candidate tailored to the new variant and has also been testing a higher dose of its existing booster and to study other booster candidates designed to protect against multiple variants,” the report continued.

“A booster dose of an authorized vaccine represents the only currently available strategy for boosting waning immunity,” Moderna said in the statement.

“Those efforts are not meant to yield commercial products; the exercise is carried out to establish a routine with regulators that will help speed up any future vaccine relaunch,” Reuters noted.

Yet another company, Novavax, said on Friday it has “started working on a version of its COVID-19 vaccine to target the variant detected in South Africa” and “would have the shot ready for testing and manufacturing in the next few weeks,” Reuters reported in a newer story.

“The company’s COVID-19 shot contains an actual version of the virus’ spike protein that cannot cause disease but can trigger the immune system,” Reuters noted. “The vaccine developer said it had started developing a spike protein specifically based on the known genetic sequence of the variant, B.1.1.529.”

“The initial work will take a few weeks,” a company spokesperson said. “Shares of the company closed up nearly 9% on Friday.”

The report notes that Novavax’s vaccine received its first emergency use approval earlier this month in Indonesia, followed by the Philippines.

“The company has said it is on track to file for U.S. approval by the end of the year,” the report continued. “It has also filed for approvals with the European Medicines Agency as well as in Canada.”

“German drugmaker BioNTech SE and Johnson & Johnson have also said they were testing the effectiveness of their respective COVID-19 vaccines against the new variant,” the report added.

Reuters reported that global authorities have reacted with alarm to the new variant, with the EU and Britain among those tightening border controls as scientists sought to find out if the mutation was vaccine-resistant. A new report indicates that more than 15 passengers on two flights from South Africa have tested positive for COVID-19 at Schiphol airport in Amsterdam.

A scientist who has been studying the Omicron variant described it as “horrific” in an interview with the BBC. Tulio de Oliveira, the director of South Africa’s Center for Epidemic Response and Innovation, told the BBC the variant has an “unusual constellation of mutations.” For example, the Delta variant had two mutations to its receptor binding domain; this variant has 10, he said.

There are also anecdotal reports of cases in vaccinated people and reinfections, but health officials said more investigation is needed, Nature reported. Researchers are trying to measure the variant’s potential to spread globally, as well as if it will prove to be milder than the Beta and Delta variants.

“A burning question is ‘does it reduce vaccine effectiveness, because it has so many changes?’,” Aris Katzourakis, who studies virus evolution at the University of Oxford.

Moore told Nature that breakthrough infections have been reported in South Africa among people who have received any of the three kinds of vaccines in use there: Johnson & Johnson, Pfizer–BioNTech and Oxford–AstraZeneca.

Two quarantined travellers in Hong Kong who have tested positive for the variant were vaccinated with the Pfizer jab, reports note.

There are currently low numbers of COVID-19 cases in South Africa, bringing into question the transmission rate of the Omicron variant, as well as the mortality rate of the virus in respective environments.

Pharmaceutical execs are already rubbing their hands together just thinking about the profits of a future vaccine relaunch. Meanwhile, public officials are seeking for any new excuse to reimplement failed risk mitigation and lockdown policies.

The Omicron variant may provide them with just the excuse they need to keep the Covid pandemic machine going.

‘Winning’: Southwest Employees Get Wind of a Huge Victory in Their Fight Against Vaccine Mandates