The media’s all-out efforts to silence Americans who have questions about 2020 election integrity is backfiring.

Far from burying election questions, the effect of stifling free speech and attacking anyone who doubts the results is those questions now remain for millions of Americans.

A recent Morning Consult poll exposes the giant divide between Democrats who uncritically accept the results and the rest of America. Just to sum up the media’s censorship campaign: It’s not working.

As you can see, the real gap in these numbers is not between Republicans and Independents, but between Democrats and the rest of American voters.

While touting that a pathetic “65 percent of voters say the election was free and fair,” it highlights the total as including 92 percent of Democrats and 32 percent of Republicans. As a bit of context, 74 million Americans voted for Donald Trump; one-third of just that number is nearly 50 million Americans.

These numbers largely track with Rasmussen’s, which found that even 30% of Democrats in the mid-November poll believed that it was likely “Democrats stole votes or destroyed pro-Trump ballots” in several states to win. 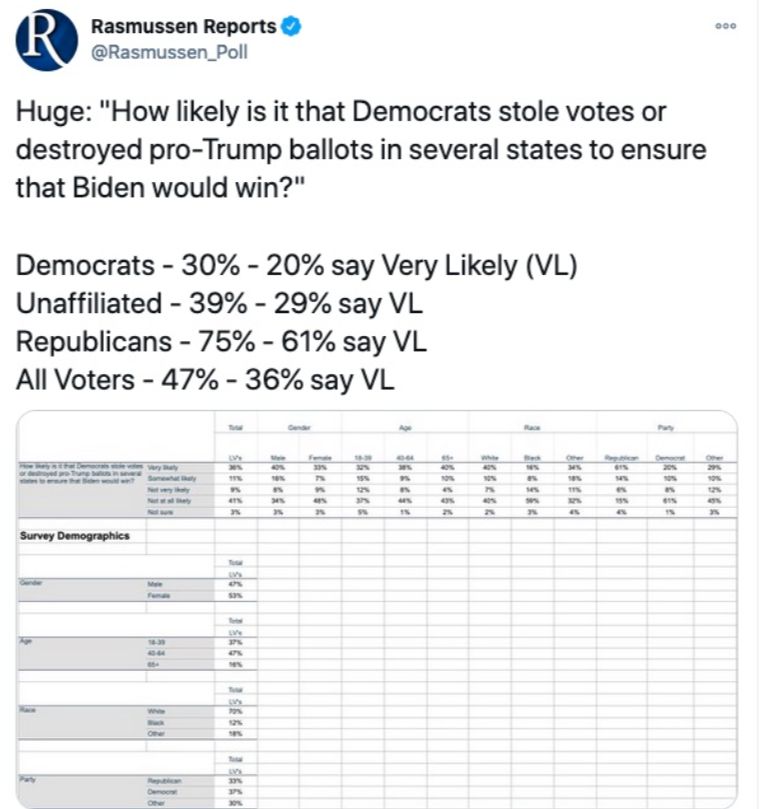 Rasmussen summed up its findings in a recent tweet on election integrity.

Note to Self-Appointed Elites: Almost half of ALL VOTERS are concerned about US election integrity:

As should be apparent to Big Tech and the mainstream media, when you shut down free speech and close off the open marketplace of ideas, Americans do not just quietly accept it and move on. If anything, it only fuels further distrust, and we are seeing that in the catastrophic public opinion numbers on U.S. elections.

Returning to the Morning Consult poll, you have to wonder if there is a certain aspect to the censorship that is “successful,” however:

This is a huge warning siren for Republican congressmembers and senators running in the 2020 election. The state legislatures better ensure that elections are widely believed to be “free and fair” by Republicans if you hope to ever see elected office again.