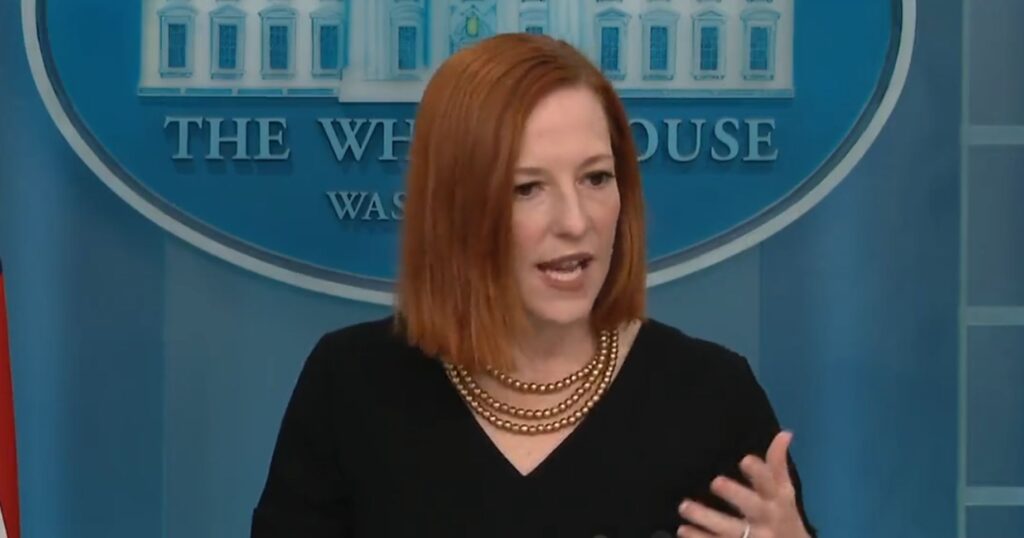 “The FDA yesterday withdrew the EUA for some monoclonal antibody treatments because they don’t work against Omicron,” a reporter asked. “But Florida continues to push for the treatment for people in the state. What’s your response to Governor DeSantis and what’s your message to the people in Florida?”

This was Psaki’s response. Watch:

“Well, let’s just take a step back here just to realize how crazy this is a little bit,” she said. We’ve approached Covid treatments like filling a medicine cabinet. We’re not relying on one type, one brand, or treatment, we invested in and continue to buy a variety across monoclonal antibodies, pre-exposure prevention therapies, and oral antivirals.”

“We have provided 71,000 doses of antivirals to Florida, including 34,000 additional treatments that do work against Omicron just this last week. I’m sorry about a range of those treatments, I should say to be clear.”

“What the FDA is making clear is that these treatments, the ones that they are fighting over, that the governor is fighting over, do not work against Omicron, and they have side effects,” she said with a straight face. “That is what the scientists are saying. We have sent them 71,000 doses of treatments that are effective against Omicron, and are effective also against Delta. And they are still advocating for treatments that don’t work.”

“We’ve seen unfortunately from the beginning in our pandemic response, a range of steps or pushes that have been made through social media platforms, unfortunately from the mouths of elected officials advocating for things that don’t work, even when we have things that do work, injecting disinfectant, promoting other pseudoscience, sowing doubt on the effectiveness of vaccines and boosters, and now promoting treatments that don’t work,” she went on. “We know it works, vaccines and boosters, we have a range of doses of things that do work and treatments and we are providing those to Florida.”

Psaki is therefore casting people who tout the efficacy of many early treatments as crackpots and crazies, comparing their usage to a belief in ‘pseudoscience’ and dredging up the misleading talking point about ‘injecting disinfectants,’ a slight on Donald Trump that has been taken out context.

The controversy exploded late Monday when the FDA has pulled the EUAs, causing thousands of monoclonal antibody (mAb) treatment appointments to be suddenly canceled. There was strong evidence that the mAbs were helping Covid survival rates under the Delta wave, but even Regeneron stated in December that the effectiveness of the treatments had waned — similar to how the vaccine and booster efficacy has waned.

“We’ve seen unfortunately from the beginning in our pandemic response, a range of steps or pushes that have been made through social media platforms, unfortunately from the mouths of elected officials advocating for things that don’t work, even when we have things that do work, injecting disinfectant, promoting other pseudoscience, sowing doubt on the effectiveness of vaccines and boosters, and now promoting treatments that don’t work,” she rambled on.

“We know it works, vaccines and boosters, we have a range of doses of things that do work and treatments and we are providing those to Florida,” she added.

The Florida Department of Health had made an announcement on Monday about the FDA’s “abrupt decision” to pull the EUAs for bamlanivimab/etesevimab as well as Regeneron.

As a result of the @US_FDA's abrupt decision to remove the EUAs for two monoclonal antibodies, monoclonal antibody treatment sites will be closed until further notice. Full press release is below. pic.twitter.com/RGeWTPwxCs

“This evening, without any advanced notice, the US Food and Drug Administration (FDA) revised the Emergency Use Authorization (EUA) for bamlanivimad/etesevimab and REGEN-COV,” Florida Health announced. “The revised EUAs do not allow providers to administer these treatments within the United States.”

The Florida Health Department informed patients that their appointments for the Covid-19 treatment have been canceled. DeSantis had set up infusion sites in five counties: Palm Beach, Broward, Miami-Dade, Duval, and Seminole.

“Florida disagrees with the decision that blocks access to any available treatments in the absence of clinical evidence,” the announcement continued. “To date, such clinical evidence has not been provided by the FDA,” it added.

Gov. Ron DeSantis demanded the Biden administration reverse “its sudden and reckless decision” in a statement.

“Without a shred of clinical data to support this action, Biden has forced trained medical professionals to choose between treating their patients or breaking the law,” DeSantis said. “This indefensible edict takes treatment out of the hands of medical professionals and will cost some Americans their lives. There are real-world implications to Biden’s medical authoritarianism – Americans’ access to treatments is now subject to the whims of a failing president.”

Governor DeSantis blasted the FDA policy during a press conference on Tuesday. Watch:

After @HHSGov avoided communication with @HealthyFla regarding statewide allocations, without any warning, @US_FDA suspended the use of multiple MABs treatments. Such decisions should be made based on clinical data – which the FDA has not provided. pic.twitter.com/zpWl7ZGODQ

“After [Health & Human Services] avoided communication with [the Florida Health Department]regarding statewide allocations, without any warning, [the FDA] suspended the use of multiple MABs treatments,” Dr. Ladapo stated. “Such decisions should be made based on clinical data – which the FDA has not provided.”

The National Institute of Health on January 19 revised its guidelines for Covid-19 drugs, including monoclonal antibodies. A January 25 release provided an overview of these changes.

“The Panel has updated this statement to address the fact that the B.1.1.529 (Omicron) variant of concern (VOC) is now the dominant SARS-CoV-2 variant in the United States,” NIH said. “Because the anti-SARS CoV-2 monoclonal antibodies (mAbs) bamlanivimab plus etesevimab and casirivimab plus imdevimab are predicted to have markedly reduced activities against this VOC, and because real-time testing to identify rare, non-Omicron variants is not routinely available, the Panel recommends against the use of these anti-SARS-CoV-2 mAbs (AIII).”

In mid-December, German researchers found in a pre-print study that the monoclonal antibody treatments “lose most of their effectiveness” against the Omicron variant.

“German researchers have found that COVID-19 therapies developed by Eli Lilly and Regeneron lose most of their effectiveness when exposed in laboratory tests to the Omicron variant of coronavirus, likely reducing treatment options if the new variant prevails,” Reuters earlier reported.

The FDA said it could reauthorize the EUAs if the two drugs prove to be effective against future variants or if they are updated to target Omicron.

“Just like vaccines will have to adapt, we’re probably going to have to constantly adapt our monoclonals,” Regeneron CEO Len Schleifer said in December.

During the Delta variant wave in late summer and early fall, demand soared for monoclonal antibodies. In late December, HHS announced it was pausing the distribution of Regen-CoV treatment and Eli Lilly’s bamlanivimab and etesevimab treatments, citing Omicron as the rationale. The Biden administration initially resumed distribution after Republican governors, including Florida Govt. DeSantis, argued that the treatments were helping some omicron patients.

The FDA is now touting alternate therapies for early Covid treatment, including  two recently approved antiviral pills from Pfizer and Merck, which it has begun shipping to states.

Former President Donald Trump had received Regeneron’s antibody combination after he tested positive for Covid-19 in July 2020. Donald Trump attributed much of his recovery to Regeneron, which he said helped him feel better “immediately.”

“But I spent four days there, and I went in,” Trump said about Walter Reed hospital. “I wasn’t feeling so hot. And within a very short period of time, they gave me Regeneron. It’s called Regeneron. And other things too, but I think this was the key. But they gave me Regeneron, and it was, like, unbelievable. I felt good immediately. I felt as good three days ago as I do now. So I just want to say, we have Regeneron.”

“We have a very similar drug from Eli Lilly, and they’re coming out, and we’re trying to get them on an emergency basis,” he said. “We’ve authorized it. I’ve authorized it. And if you’re in the hospital and you’re feeling really bad, I think we’re going to work it so that you get them and you’re going to get them free. And especially if you’re a senior, we’re going to get you in there quick. We have hundreds of thousands of doses that are just about ready. I have emergency use authorization all set, and we got to get it signed now.”

The CDC and FDA have argued that monoclonal antibody treatments are not a substitute for vaccination and are generally reserved for vulnerable people, including seniors, transplant recipients and those with serious pre-existing health conditions, such as diabetes and heart disease.