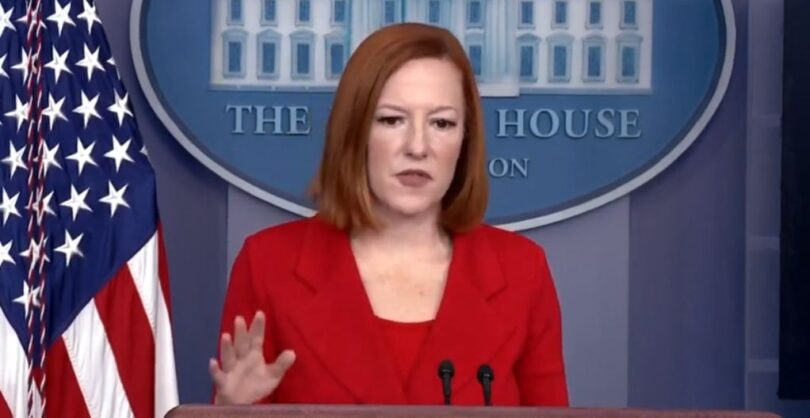 White House Press Secretary Jen Psaki on Thursday continued to demonstrate her constitutional and legal illiteracy by pronouncing ‘nothing is off the table’ when it comes to Americans’ fundamental rights, such as ‘freedom of travel.’

“Why not go further in the direction of — of you know, public health and mandates given the potential risk and the fact that we are headed into winter?” one ‘journalist’ tossed to Psaki.

“Sure. Well, one — I would say that nothing is off the table. So — and including domestic travel,” she replied.

Except this is nonsense. The U.S. Constitution has an implied right to ‘freedom of travel‘ in the Fifth Amendment. And as a recent district court ruling showed, Biden’s legal team cannot even prove that these ‘vaccines’ substantially lower transmission.

Once again, the Pfizer-Bio-N-Tech and Modern mRNA therapeutics being marketed as “vaccines” are significant vectors for the Covid variants. Bloomberg News pointed to a study published by the medical journal “The Lancet” that established that vaccinated individuals spread the Delta variant just as much as unvaccinated people do.

“People inoculated against Covid-19 are just as likely to spread the delta variant of the virus to contacts in their household as those who haven’t had shots, according to new research,” Bloomberg reported.

“In a yearlong study of 621 people in the U.K. with mild Covid-19, scientists found that their peak viral load was similar regardless of vaccination status, according to a paper published Thursday in The Lancet Infectious Diseases medical journal,” the report continued. “The analysis also found that 25% of vaccinated household contacts still contracted the disease from an index case, while 38% of those who hadn’t had shots became infected.”

The Omicron variant that may soon prove to become the dominant Covid strain is being readily transmitted among the ‘fully vaccinated,’ even those with ‘boosters,’ according to contact tracing.

That hasn’t stopped once-free nations like Canada from recently imposing a domestic travel ban for the unvaccinated, while citing the steadily increasing Omicron variant as an additional justification.

Yet Dr. Angelique Coetzee, who treated the first known Omicron patient, is warning that there is nothing yet known about the variant that justifies governments taking “extreme actions” like travel bans.

“Quite simply, I have been stunned at the response – and especially from Britain,” she said.

“And let me be clear: nothing I have seen about this new variant warrants the extreme action the UK government has taken in response to it,” Dr. Coetzee added.

Reuters reported that Britain said Omicron was “the most significant found yet” and banned flights from South Africa, Botswana, Lesotho, Eswatini, Zimbabwe and Namibia. “European Union states also agreed to suspend travel to southern Africa, the presidency of the EU said,” the report added.

Jen Psaki’s pronouncement that nothing is “off the table” when it comes to a possible domestic travel mandate for Covid shots echoes a statement that she made on Monday.

“Well, I think what you heard the President say — I think — it was hard to hear the question, so I think this was a question that was asked, but was that he wasn’t taking any options off the table, but he’s going to rely on that advice of his health and medical experts,” Psaki responded.

On Thursday, you heard a similar catch phrase trotted out by Biden’s so-called “Covid Czar.”

NEW – Biden’s COVID Czar says "everything is on the table" when asked about a vaccine mandate for domestic travel within the United States.pic.twitter.com/AsGtCIGtAt

“We will continue to look at all options, and everything is on the table,” said Jeff Zients, the coordinator of the White House’s Covid policy response.

As Politico reported in August, Zients has been perceived as a major obstacle to travel industries lifting regulations that would allow Americans to more freely travel.

“The White House is resisting lifting U.S. travel bans on a broad swath of foreign countries, despite a rising chorus of voices both inside and outside the administration questioning whether they are still necessary in the fight against Covid-19,” the publication reported at the time.

“Critics of the bans point to Jeff Zients, the coordinator of the White House’s coronavirus pandemic response, as the main obstacle standing in the way of easing the longstanding restrictions, according to five people familiar with the matter,” Politico added. “And some of them have grown so frustrated with Zients that they said they have begun discussing ways to go around him and take their case to other top administration officials instead.”

“I think the American people are owed an explanation: What the hell happened?” said Rep. Brian Higgins (D-NY), one of 75 lawmakers who sent a letter to Biden urging him “to begin taking science-based, data-driven steps to safely reopen international travel to the United States.”

The reported noted that a doctor with access to the White House said, “Jeff Zients is the holdup of the proof of vaccination. He thinks there are real political consequences to the Biden team looking like they are pro-vaccine passports. He’s thinking politically, but scientifically proof of vaccination is everything.”

“I do think ultimately, yeah, Zients is the decision maker,” an airline lobbyist agreed. “He’s certainly been the one [airline] CEOs have met with and talked to.”

Meanwhile, the Biden administration has been accused of granting special privileges to airlines by turning the other way on federal vaccine mandates. The NY Post on Sunday claims that the airlines are somehow being allowed to ‘escape’ the mandates.

“Over Thanksgiving, Americans flew to visit friends and family in numbers close to pre-COVID travel, with 2.3 million people flying on Wednesday,” Nicole Gelinas writes. “Yet the supposedly science-based administration balks at applying the workplace argument to domestic-airline customers.”

“When asked on ‘Meet the Press’ before Turkey Day whether the government would require vaccinations for flying, Transportation Secretary Pete Buttigieg said no, because masks are ‘highly effective’,” she noted. (Of course, this is false.)

“It makes no sense to assert that masks are ‘effective’ for flying but not in the workplace,” Gelinas argues. “Flying, remember, isn’t just limited to a plane where passengers wear masks and air circulates fast. It includes airline terminals, which are buildings, often crowded ones, where people eat and drink.”

However, the Biden administration can flip this argument on its head: Why not mandate both mask and vaccines for both? That apparently what it is “considering” and is likely about to do.

The White House’s “nothing is off the table” remarks are no accident: The Biden administration doesn’t care about The Constitution, their oaths of office, or Americans’ freedoms.

WATCH: Biden Slurs His Words, Threatens to Do ‘Everything in His Power’ to Get Children UNDER 5 Vaccinated