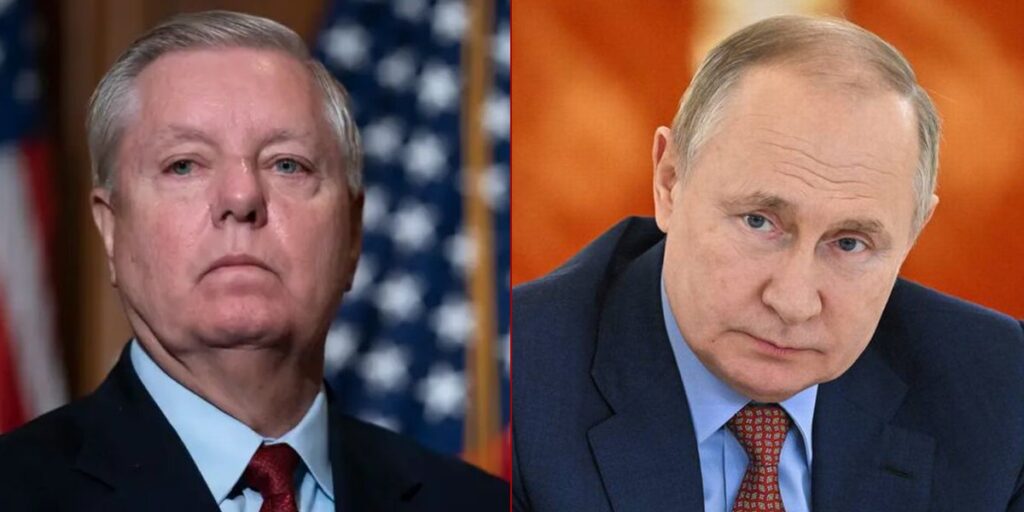 Senator Lindsey Graham appeared on “Hannity” on Thursday night and issued a striking challenge for the Russian people: Assassinate their president Vladimir Putin.

“How does this end?” he asked. “Somebody in Russia has to step up to the plate. Is there a Brutus in Russia? Is there a more successful Colonel Stauffenberg in the Russian military?”

“The only way this ends, my friend, is for somebody in Russia to take this guy out,” he continued. “You would be doing your country a great service and the world a great service.”

Graham also repeated his plea to the Russian people on Twitter.

The only people who can fix this are the Russian people.

Easy to say, hard to do.

“The only people who can fix this are the Russian people,” he added. “Easy to say, hard to do. Unless you want to live in darkness for the rest of your life, be isolated from the rest of the world in abject poverty, and live in darkness you need to step up to the plate.”

Putin’s press secretary responded to Graham’s call for the Russian leader’s assassination as an “hysterical escalation of Russophobia.”

“These days, not everyone manages to maintain sobriety, I would even say sanity, and many lose their minds,” the Russian press secretary said.

Dmitry Peskov, the Russian press secretary, is one of a number of Putin associates who have been targeted for sanctions by the Biden administration, including visa bans.

Graham’s call for the Russian president be assassinated was met with bipartisan condemnation. Rep. Ilhan Omar advocated for U.S. officials to be more responsible with their language.

I really wish our members of Congress would cool it and regulate their remarks as the administration works to avoid WWlll. As the world pays attention to how the US and it’s leaders are responding, Lindsey’s remarks and remarks made by some House members aren’t helpful.

Omar’s remarks were echoed by far right representative Marjorie Taylor Greene (who has been banned from Twitter).

The first time she’s ever been right about literally anything. We are in perilous times.

The odd political bedfellows (albeit for undoubtedly different motives) did not go unnoticed.

When MTG and Ilhan Omar agree that Lindsey Graham has lost his mind, you know it's time for every NeoCon like Graham to retire or be primaried into irrelevance.

WATCH: @RepThomasMassie responds to Lindsey Graham’s call for Putin to be assassinated: “I think it’s insane…”

Lavern Spicer argued that Senator Graham is used to being ignored due to his frequent use of hyperbole as a Fox News pundit.

He’s so used to no one giving a damn what he has to say in America that he forgets the words of a US Senator actually carry weight abroad.

There were a few conservatives who defended Graham’s rhetoric, however, such as Dan McLaughlin of National Review Online.

He's right, but there are some things a US Senator shouldn't say out loud. Or, for that matter, things that the US government shouldn't have its fingerprints on. https://t.co/V7msWHpFrr

“He’s right, but there are some things a US Senator shouldn’t say out loud,” McLaughlin wrote on Twitter. “Or, for that matter, things that the US government shouldn’t have its fingerprints on.”

Rep. Adam Kinzinger, who will soon be losing office in Illinois due to redistricting, believes that a “no-fly zone” should be implemented.

This is a good moment to renew my call for a no fly zone, at the invitation of the Ukraine government. I fear if this continues, we will have to intervene in a bigger way

The ‘no fly-zone’ has been roundly criticized for being an escalation that would likely lead to a U.S. and NATO war against Russia.

Sen. Lindsey Graham’s proposal that the Russian head of state to be assassinated — a violation of international law — appears to be under serious consideration by others, including a Russian tycoon who has put a million dollar bounty on Putin’s head.

“Alex Konanykhin, an entrepreneur and former banker, posted the bounty on social media as Russia enters a full week of military action against the neighboring country,” Newsweek reported. “Western governments and companies have responded to the invasion by seeking to economically punish Putin and Russia’s ruling elite. The bounty offered by Konanykhin, who is now based in the U.S., places an even more direct target on the Russian leader as backlash over the invasion continues to escalate.”

“Konanykhin said in a Facebook post Tuesday that he promised to pay the officer or officers the money for arresting, ‘Putin as a war criminal under Russian and international laws’,” the report noted.

Vladimir Putin has divided the right with his attack on Ukraine. Many conservatives believe that the battle between the two corrupt, undemocratic nations is a no-win situation for the United States, and not worth risking World War III over.