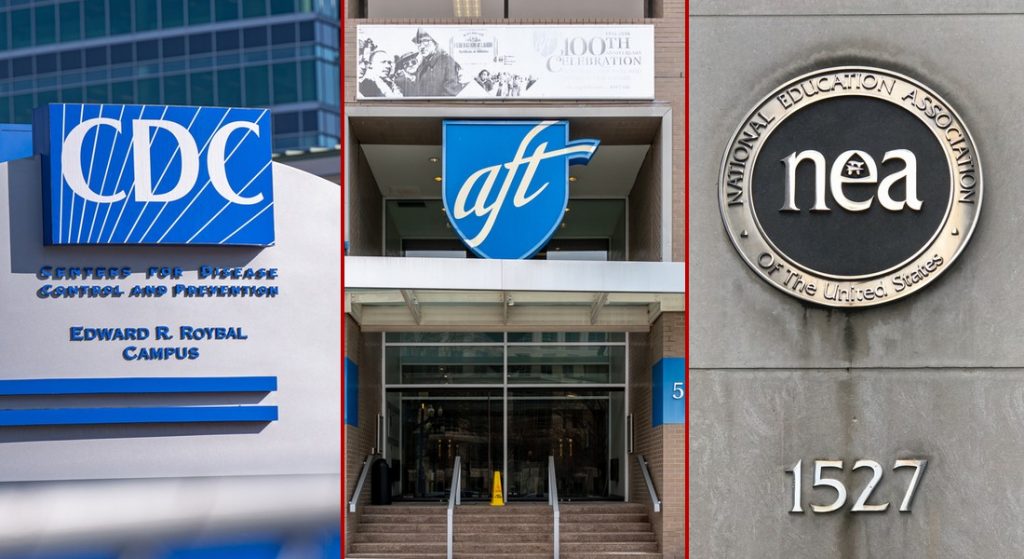 The Centers for Disease Control and Prevention (CDC) in May issued guidance that it was unnecessary for vaccinated Americans to wear masks indoors and outside. But a subsequent flurry of emails show that displeased teacher’s unions — not the “science”  — caused the CDC to back out on its guidance. It would subsequently issue stricter school guidelines that contradicted its previous May 13 guidance.

One day after the CDC’s May guidance, the White House director of labor engagement, Erika Dinkel-Smith, said she stopped the National Education Association (NEA) from releasing a critical statement.

“Would you know when Dr. Wolensky would be able to call NEA-Pres. Becky Pringle?” Dinkel-Smith wrote in the email. “They’ve gotten significant incoming and are getting targeted for a response from the media. I’ve gotten them to hold on their statement calling for clarification.” 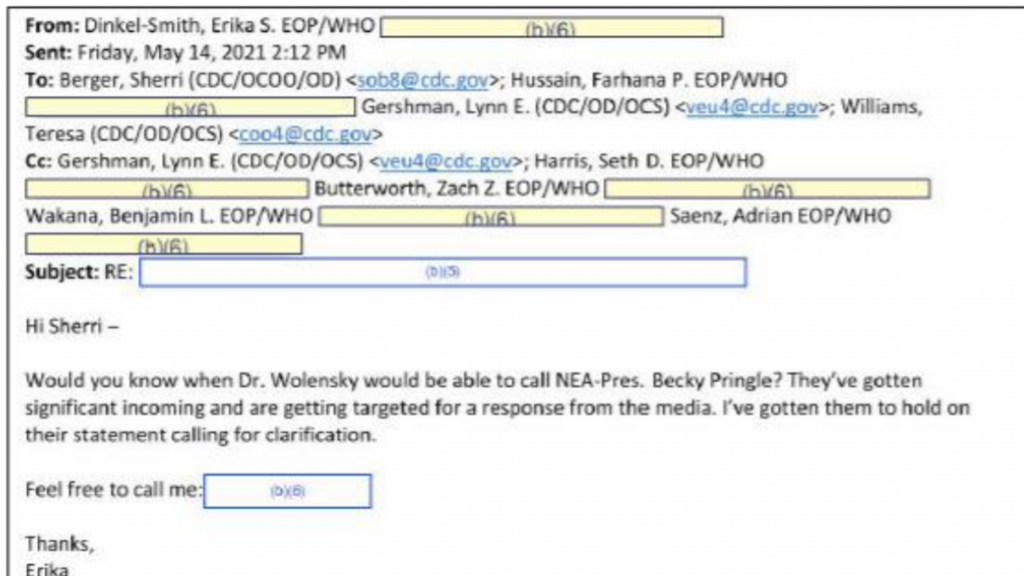 That put into motion coordination between the NEA and White House on the mask guidance. The White House director of labor engagement and the CDC were forwarded copies of the NEA’s draft statement.

“We appreciate the developing nature of the science and its implications for guidance, but releasing the guidance without accompanying school-related updates creates confusion and fuels the internal politicization of this basic health and safety issue,” the draft statement read. “CDC has consistently said, and studies support, that mitigation measures, including to protect the most vulnerable, remain necessary in schools and institutions of higher education – particularly because no elementary or middle school students, and few high school students, have been vaccinated.”

“This will also make it hard for school boards and leaders of institutions of higher education to do the right thing by maintaining mitigation measures,” it continued. “We need CDC clarification right away.” 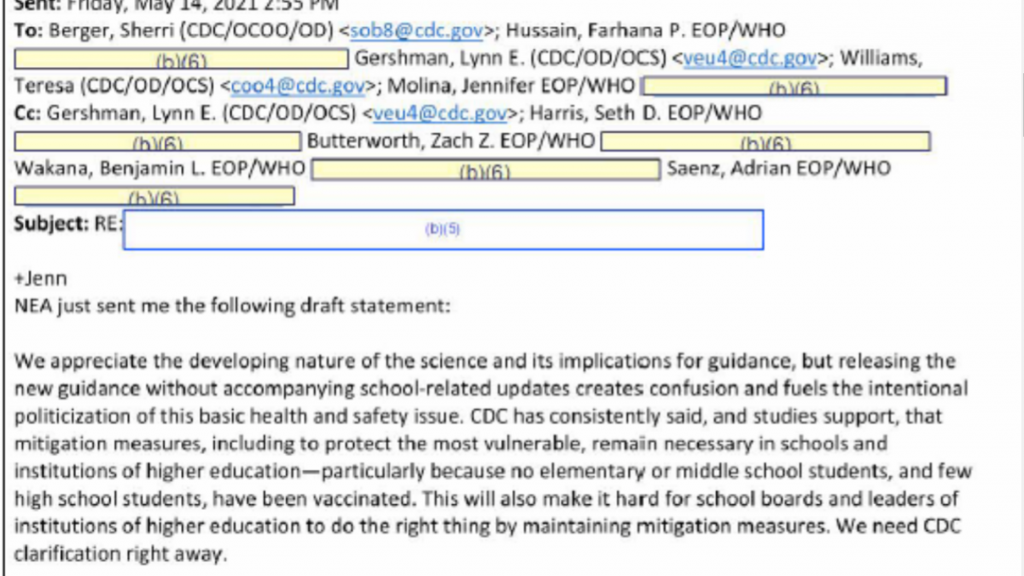 Later that day, Dinkel-Smith asked CDC chief of staff Sherri Berger to put NEA President Becky Pringle in touch with the CDC director. Berger wrote “will do” and added that the CDC director was “connecting w/ Becky now.” 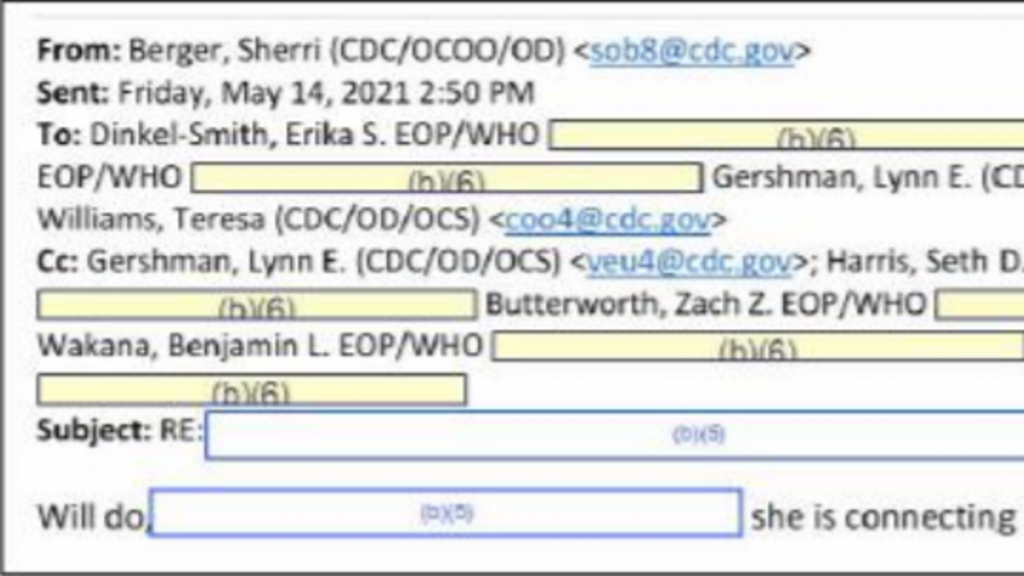 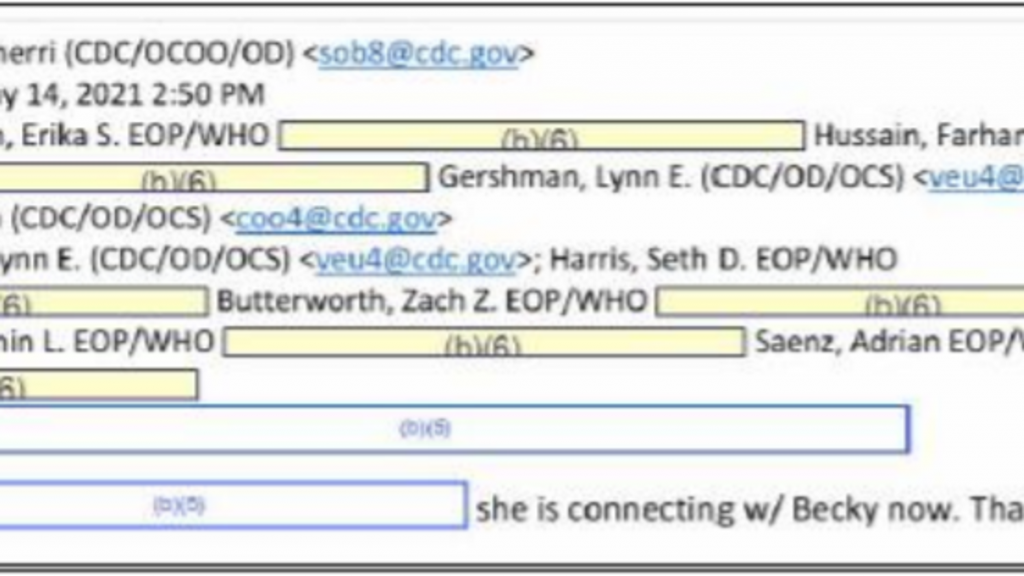 Then CDC chief of staff Sherri Berger said that she had reached out to both Becky Pringle at the NEA and Randi Weingarten, president of the American Federation of Teachers. 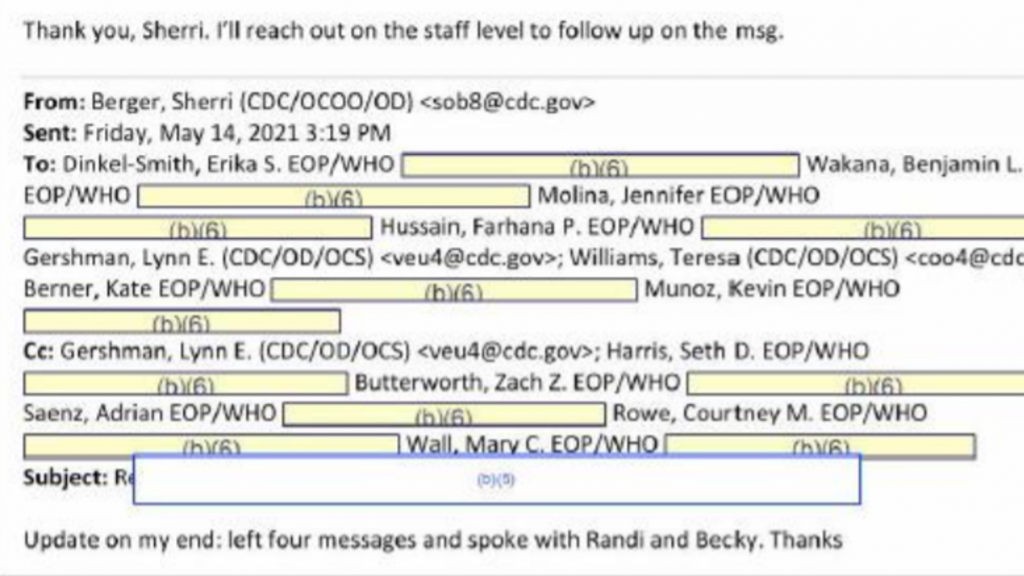 “The next day, on May 15, the CDC updated its masking guidance to indicate that all people should wear a mask at school regardless of vaccination status,” Fox News reported.

“This batch of emails came just weeks after we already exposed the teachers unions influenced the CDC on school openings,” Americans for Public Trust Executive Director Caitlin Sutherland told Fox News. “Lo and behold, less than two weeks later, they’re at it again, but this time in relation to mask guidance.”

The emails show that the CDC coordinated with many of the most powerful teacher’s union heads on the school guidance. They reveal, once again, that political interests are wielding clout with the CDC on its purportedly “scientific” guidance.

Earlier this year, the New York Post demonstrated coordination between the CDC and the teacher’s unions showing that the educators ‘put the brakes on a full re-opening of in-person classrooms,’ as emails between top CDC, AFT and White House officials showed.

The CDC’s stringent and unnecessary mask guidance for schoolchildren and vaccinated adults flaunts international norms and the agency’s own scientific studies. In late August, the Foundation for Economic Education highlighted the CDC burying its own study showing that masking in school made no statistically significant difference.

“A recent New York magazine article states that the science on masks ‘remains uncertain,’ but noted the Centers for Disease Control and Prevention (CDC) in May published a large-scale study of COVID transmission in US schools,” FEE noted.

“The study, which analyzed some 90,000 elementary students in 169 Georgia schools from November 16 to December 11, found that there was no statistically significant difference in schools that required students to wear masks compared to schools where masks were optional.”

“The 21% lower incidence in schools that required mask use among students was not statistically significant compared with schools where mask use was optional,” the CDC said. “This finding might be attributed to higher effectiveness of masks among adults, who are at higher risk for SARS-CoV-2 infection but might also result from differences in mask-wearing behavior among students in schools with optional requirements.”

The CDC’s findings “cast doubt on the impact of many of the most common mitigation measures in American schools,” New York Magazine’s David Zweiger remarked. Jon Miltimore, reacting to the findings in the FEE column, points out that there are far greater threats to schoolchildren than Covid-19.

“Masks are no longer simply a matter of individual or public health. Bear in mind, children face a low risk of falling sick or being hospitalized with COVID—with or without a face mask,” Miltimore states. “Small children are far more likely to die of the flu, a car accident, a swimming pool, cancer or some other ailment than COVID-19, CDC data show.”

The FEE article noted that the United States is also an oddity among its European peers in terms of its obsession with masking children. As New York magazine noted, many European nations have exempted students from mask mandates—including the UK, all of Scandinavia, the Netherlands, Switzerland, and even France and Italy. The results show that the policy makes no difference.

“Conspicuously, there’s no evidence of more outbreaks in schools in those countries relative to schools in the U.S., where the solid majority of kids wore masks for an entire academic year and will continue to do so for the foreseeable future,” the New York Magazine article states. “These countries, along with the World Health Organization, whose child-masking guidance differs substantially from the CDC’s recommendations, have explicitly recognized that the decision to mask students carries with it potential academic and social harms for children and may lack a clear benefit.”

“The CDC’s policy placates the leaders of teachers’ unions but flouts the guidance issued jointly by UNICEF and the World Health Organization: ‘Children aged 5 years and under should not be required to wear masks. This is based on the safety and overall interest of the child and the capacity to appropriately use a mask with minimal assistance’. The groups also advise against masks for older children when physically active: ‘Children should not wear a mask when playing sports or doing physical activities, such as running, jumping or playing on the playground, so that it doesn’t compromise their breathing’. For children aged six to 11, masks are recommended in classrooms only if the school is in a locality with ‘widespread transmission,’ and then only after consulting with parents and weighing the potential impact on ‘learning and psychosocial development’.”

This is a far cry from the teacher’s unions, and subsequently, the CDC’s approach. The City Journal brings in international research on mask-wearing in schools to demonstrate, once again, that they don’t make any statistically significant difference in regards to stopping Covid.

“Since UNICEF and WHO issued that guidance in August, the evidence emerging from schools shows that masks and most other restrictions are unnecessary for children of any age,” City Journal observes. “Swedish economists at the universities of Stockholm and Uppsala conducted the most rigorous and comprehensive study. During last spring’s outbreak, Sweden in effect undertook a nationwide controlled experiment by switching its senior high schools to online instruction while keeping younger students in classrooms with few Covid restrictions. Class sizes for the younger students were not reduced, and students who had been in contact with an infected person were allowed to stay in school (instead of being quarantined at home, as the CDC in the United States recommends). Neither teachers nor students were encouraged to wear masks—in fact, health authorities discouraged the wearing of masks, and few Swedes of any age wore them last year.”

“None of the children who kept going to school died of Covid, and there was little effect on the adults in their lives,” the article continues. “The Swedish researchers, who had access to the health records of the entire population, analyzed the rates of Covid infections and medical treatments among hundreds of thousands of teachers and parents. To minimize confounding variables, the economists compared two groups of parents with similarly aged children: those with ninth-graders who kept going to school and those with tenth-graders who stayed home. There was no difference in their risk of serious Covid disease.”

The author John Tierney reacts to the research by laying bare the damage that mask virtue-signaling does to children forced to wear masks for hours on end every day of their young lives.

“Schools have canceled many sports and other extracurricular activities, isolated students in Plexiglas cells, and forced them to wear masks in classrooms and on playgrounds,” he writes. “Social distancing and masks hinder learning while harming children emotionally, socially, and physically, all for no purpose other than providing false comfort to adults who ought to know better.”

“The rationale for forcing anyone to wear a mask is questionable, as my colleague Connor Harris has meticulously demonstrated. Wearing masks might provide some protection for some high-risk adults in crowded indoor settings, but the evidence is mixed, and masks can be not just uncomfortable but harmful. Some adults may judge the trade-offs worthwhile for themselves, but for children it’s all pain and no gain,” he continues.

“The mask mandates are especially cruel to young children,” he adds. “Adults are supposed to ease their fears, to reassure them that monsters aren’t hiding under the bed. Instead, we’re frightening them into believing they’re being stalked by invisible menaces lurking in the air.”

Dr. Mary Gillis, who holds a doctorate in education, summarizes the psychological and emotional scarring that extended mask wearing in children inflicts.

“Young children especially rely on facial expressions to understand situations,’ Dr. Gillis says. “With face coverings, this may become increasingly difficult for them to learn what’s called ‘social attachment,’ making them more vulnerable to feelings of mistrust and concerns for their safety.”

The teacher’s unions appear to care more about the masks than about children. The CDC apparently cares more about political decision-making than about the “science.” It’s hard to imagine a combination that is a greater betrayal of the public trust.

Watch: Jen Psaki Runs from Press Conference as Reporter Confronts Her on Fauci Lying to Congress