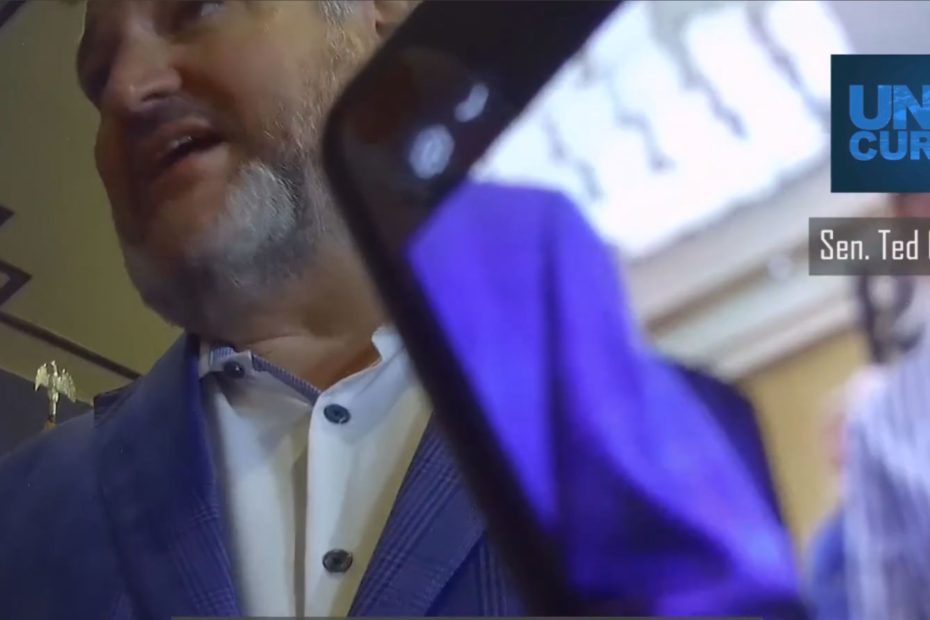 Senator Ted Cruz, Republican from Texas, was found ‘guilty’ of being a conservative American who says what millions of people think about the partisan FBI, as shown in an “undercover” video released on Tuesday.

The Cruz video, as captured by “gonzo” journalists at the left-wing group Undercurrent, shows the Texas senator being fairly level-headed in comparison to millions of Americans who would just rather see the FBI disbanded rather than remain a politicized weapon of the radical left.

“I wanted to say, thank you so much for all you’re doing to fight for Herschel Walker and to take back the Senate,” a woman in the video said about the Georgia senate candidate.

“And I just think it’s so important that you guys are actually going to defund all those IRS agents,” the woman added.

“But I think it’s imperative that you really have to defund the FBI after all the witch hunts that are goin’ on,” she continued.

“It is a horrific abuse of power at the FBI and it’s wrong,” Cruz replied. “And there needs to be a complete housecleaning that happens at the FBI.”

“Are y’all gonna be able to do that when you retake the Senate?” she pressed.

There you have it. The big ‘gotcha’ video on the radical left is a rager: Ted Cruz being entirely fair in seeking more oversight over the FBI and a ‘complete housecleaning’ of partisan agents.

Sen. Ted Cruz is undoubtedly saying what millions of Americans think about the FBI. A Rasmussen poll of 1,000 U.S. Likely Voters surveyed from August 15-16, showed “a majority of likely voters surveyed agreed with former Trump ally Roger Stone’s statement that ‘a group of politicized thugs at the top of the FBI who are using the FBI … as Joe Biden‘s personal Gestapo’.”

“A majority (53%) of voters now agree with Stone’s statement – up from 46% in December – including 34% who Strongly Agree,” the poll reports. “Thirty-six percent (36%) disagree with the quote from Stone, including 26% who Strongly Disagree.”

The ‘housecleaning’ has already begun at the FBI, in a tacit concession of the bureau’s mishandling of politically sensitive investigations.

The FBI on Friday accepted the abrupt resignation of Special Agent in Charge Timothy Thibault, a 25-year veteran who had a long track record of bias and partisan abuse in investigations ranging from the Hunter Biden laptop probe to multiple investigations of former President Donald Trump.

The Department of Justice is also ‘taking action’ to prevent the appearance of political bias ahead of the 2022 midterm elections, according to a new report out on Tuesday.

“The Justice Department’s political appointees will be barred from attending partisan events prior to the midterm elections, under a new policy enacted amid scrutiny over the FBI search of former President Donald Trump’s Florida home,” Bloomberg reported.

“As department employees, we have been entrusted with the authority and responsibility to enforce the laws of the United States in a neutral and impartial manner,” Attorney General Merrick Garland wrote in a message to employees. “In fulfilling this responsibility, we must do all we can to maintain public trust and ensure that politics — both in fact and appearance — does not compromise or affect the integrity of our work.”

The DOJ memo comes in the wake of a series of highly controversial actions and disturbing revelations about 2020 election interference that have shaken Americans’ confidence in the bureau.

In a court filing on Monday, it was confirmed that the FBI raid carried out against former President Donald Trump’s estate at Mar-a-Lago on August 8 led to the seizure of documents that the bureau had earlier classified as falling under “attorney-client privilege.”

A Just the News report last week showed that the White House coodinated with the National Archives in April to set up the August FBI raid on Mar-a-Lago.

Meta/Facebook CEO Mark Zuckerberg on Monday was served with formal demands by two sitting U.S. senators to turn over any and all documents showing its internal communications with government agencies, all discussion of the New York Post’s Hunter Biden laptop story, and any correspondence with the FBI showing its interference in the 2020 election.

It is interesting that Undercurrent journalist Lauren Windsor, who publicized the ‘undercover’ video herself, has an interesting history of gaslighting.

NEW UNDERCOVER: Ted Cruz agrees to defunding the FBI, says there needs to be “a complete housecleaning that happens at the FBI.” pic.twitter.com/w5aXCtAehH

Folks, Lauren is just going with brazen dishonesty on a Tuesday. Watch the video for yourself.

“Folks, Lauren is just going with brazen dishonesty on a Tuesday,” Guest said. “Watch the video for yourself.”

Windsor is notorious for having participated in a race hoax to frame the Youngkin campaign ahead of its ultimately successful bid for Virginia governor.

In my capacity as a communications consultant, I worked w @ProjectLincoln to coordinate today's Youngkin action in Charlottesville. I join them in the fight to defend our democracy from rightwing extremists and call for Glenn Youngkin to denounce Trump’s ‘very fine people.

“In my capacity as a communications consultant, I worked w@ProjectLincoln to coordinate today’s Youngkin action in Charlottesville,” Windsor claimed. “I join them in the fight to defend our democracy from rightwing extremists and call for Glenn Youngkin to denounce Trump’s ‘very fine people.”

Windsor also appears to have coordinated with a CBS reporter in framing the Youngkin hoax.

How is this tweet from @lawindsor, who later admitted she planned the whole hoax, still up? pic.twitter.com/YvDS3y8k76

“How is this tweet from@lawindsor, who later admitted she planned the whole hoax, still up?” Free Beacon’s executive editor Brent Scher asked.

This isn’t the first time that Windsor has conducted an “undercover” operation. The Daily Beast reported the time she posed as a Republican to get undercover footage of Youngkin speaking against abortion.

“But the man and Youngkin’s interlocutor weren’t really Republicans, a subterfuge that became clear a few weeks later when hidden camera footage of his remarks aired on MSNBC. Youngkin’s Democratic opponent, former Virginia governor Terry McAuliffe, quickly hammered Youngkin over the video, claiming his views on abortion were out of step with voters in the purple state,” the Daily Beast reported.

“The Youngkin video and many others like it was the creation of Democratic operative Lauren Windsor, who has emerged over the past year as a lurking menace to Republican officials who think they’re just chatting with their ideological compatriots,” the report continued. “By posing at public events as fervent conservative activists, Windsor and her compatriots at her YouTube channel, ‘The Undercurrent,’ have recorded a number of Republican politicians in unguarded moments.”

If this “undercover” schtick means more people get to see mainstream conservatives like Cruz promising to hold the FBI and IRS accountable for partisan abuses of power, then Republicans should seek out more of these ‘gotcha’ moments. Windsor might as well be working for the Cruz campaign, if this is the best the radical left has got.