The January 6th uprising at the capitol building during the convening of the Electoral College is one of the most mythologized events in U.S. history, despite it now only being half a year old.

One of the most politically impactful impressions of the Jan. 6 siege is the extreme danger presumably posed to the nation’s lawmakers. After all, these were assuredly Trump supporters upset about the 2020 election. What other reason would they storm the capitol building than to overturn the results?

Yet, there are numerous false assumptions that betray the mainstream narrative about the Capitol riots. The real crack in the narrative begins with this: The Capitol building was evacuated because of the bomb threat, not because of the protesters outside.

How do we know this? Because former Capitol Police Chief Steven Sund testified to it earlier this year, although the major news media appears to have missed or ignored this salient fact.

“The discovery of a pipe bomb outside the Republican National Committee headquarters in Washington on Jan. 6 prompted police to evacuate two congressional buildings, not, as was believed, the attack on the U.S. Capitol,” as the Washington Examiner reported in February.

“U.S. Capitol Police learned of the discovery of two pipe bombs on Capitol Hill around the same time, just before 1 p.m. ET that Wednesday,” the report continued. “Capitol Police responded to one bomb discovered by an RNC staff member at the organization’s office, just a few blocks from the Capitol. Metropolitan Police Department officers responded to a second pipe bomb that was spotted outside the nearby Democratic National Committee headquarters. Each department sent officers to respond, hurting the Capitol Police’s ability to secure the Capitol since MPD was called to the Capitol minutes after the bombs were discovered.”

“That resulted in the evacuation of two congressional buildings, the Cannon House Office Building, as well as one of the Library of Congress buildings. So it took extensive resources,” former Capitol Police Chief Steven Sund testified at a Senate hearing.

The fascinating thing about the RNC and DNC pipe bomb attempts is the FBI’s seeming lack of interest in actually apprehending whomever staged them. While the FBI has been issuing public calls for assistance with locating MAGA grandmas and soccer moms who were at the capitol on Jan. 6, it has been reluctant to release video of a suspect that has been tied to the attempted pipe bombing.

FBI Director Christopher Wray was called to account for his agency’s handling of the Capitol riot investigation in June. Rep. Paul Gosar (R-AZ) asked Director Wray to verify that no one at the event has been charged with “insurrection.”

“Director Wray, can you confirm that nobody arrested for the involvement in the January 6 riot has been charged with the crime of insurrection?” Gosar asked.

“Sir, I think I said in response to one of your colleagues, sitting here right now, I don’t believe there have been insurrection charges in any of the indictments so far,” Wray said. “But again, with 500 cases, I want to be sure…”

“I believe you’re right or I agree,” Gosar responded.

The legal definition of the crime of “insurrection” can be found at U.S. Code 18 USC Ch. 115: Treason, Sedition, and Subversive Activities; §2383. Rebellion or insurrection. The definition is as follows:

“Whoever incites, sets on foot, assists, or engages in any rebellion or insurrection against the authority of the United States or the laws thereof, or gives aid or comfort thereto, shall be fined under this title or imprisoned not more than ten years, or both; and shall be incapable of holding any office under the United States.”

A public search of the charging documents for the 579 people charged over Jan. 6 activities at the U.S. Capitol building show exactly zero charges for “insurrection.” Furthermore, it does not show charges for “treason” or “rebellion.”

If this were truly a “coup” attempt or an “insurrection,” as the media continues to say, then surely those charges would have been brought. Instead, the majority of the charges thus far appear to be for crimes such as: “Knowingly entering or remaining in any restricted building or grounds without lawful authority”; “Unlawful entry to restricted building”; and “Violent entry and disorderly conduct on Capitol grounds.”

Serious charges — but not “attempted murder,” “plotting to execute a member of Congress”; “carrying an unauthorized firearm in a government building”; or “rebellion, treason or insurrection against the United States.” The charges are pedestrian in contrast to the Democratic Party’s hyperbolic narrative, which has been echoed and amplified by an uncritical mainstream media.

Gosar continued to press Wray about the FBI’s investigation of Jan. 6 and touched upon the matter of the pipe bomb threats.

“I’m changing gears again, Director Wray, the FBI released several 30-second video clips of a suspected pipe bomber seeking the public’s help to identify him,” Gosar said. “Two of the video clips begin and end with the suspect already in the middle of the frame. You know how long the suspect pipe bomber was there and which way he exited, but you have withheld that information from the public. The FBI is in possession of the full tapes of the pipe bomb suspect and knows far more than the public about potential identifying details. You have begged the public’s help in identifying this pipe bomb suspect. You even offered a $100,000 reward. Why have you not released the full tapes if you truly intend to leverage the public’s help? Will you commit to releasing the full tapes to the public immediately?”

“No, sir, I can’t make that commitment,” Wray said. “I’m very careful about making sure that we protect the integrity of the ongoing investigation, and when we share information with the public while asking for their help, it has to be done very thoughtfully with regard to both the solicitation for assistance as well as, again, the protection of the integrity of the ongoing investigation…”

“Well, I appreciate it,” Gosar said. The FBI had posted the following public flier about the suspect in an update on January 11. 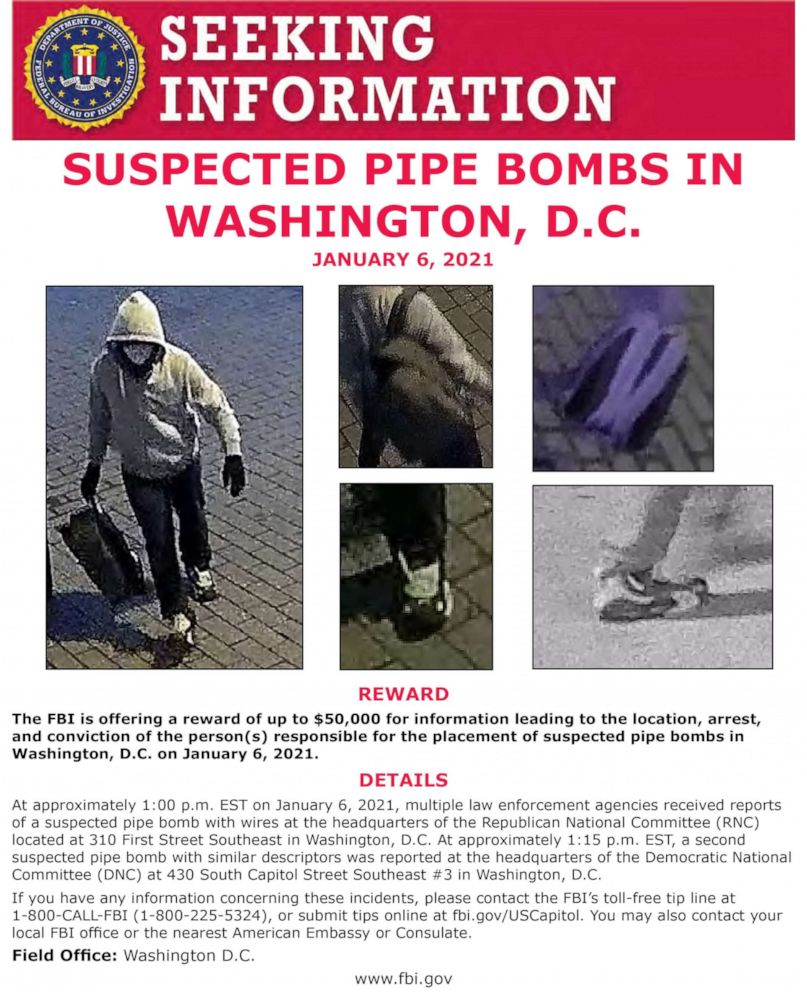 “Well, what in conclusion, I again, urge the Capitol surveillance footage and the truth to be released in order to exonerate the innocent and provide justice and accountability for those who violate it. I would like to ask for unanimous consent to enter into the record a report from a Revolver News regarding infiltration and incitement of the January 6 protest by federal officials without objection.” It should be noted that Revolver News report regarded alleged FBI informants and agents working the extremists at the capitol on January 6th.

In summary, there are still many things we do not know about the Jan. 6 event. But here are a few more things we do know that do not fully square with the prevailing mainstream narrative. We know there was a ‘stand down’ order effectively issued that prevented the Capitol Police and the National Guard from full responding as if it were indeed a threat to the lives of the Congress members. The Capitol Police’s Inspector General testified in April on the matter, but refused to give the name of the official who issued it. We also know, as far as publicly available charging documents are concerned, that no one had a firearm inside the Capitol building.

We know these extremists were not all ‘Trump supporters’. As a Reuters report stated about the Boogaloo Bois, one of the extremist groups at the Capitol: “While most ‘boogaloos’ are libertarians who largely oppose Trump, Dunn said the group embraced the moment to strike against the government.” Furthermore, the purported “far right” group has allied itself with the “far left” group Black Lives Matter. We also know that there were some Antifa supporters in the mob, such as John Earle Sullivan, the filmer of Ashli Babbitt’s shooter.

It appears that the FBI’s interest in withholding at least 14,000 hours of Capitol riots footage, including video of the RNC and DNC pipe bomb suspect, is to keep the mainstream media’s “useful myths” about January 6 alive. What else could explain the FBI’s lack of transparency?