The International Dockworkers Council, an international nonprofit association comprised of 92 dock workers organizations from 41 countries, and representing 100,000 affiliated members, has issued a statement in solidarity with dock workers around the world striking against unlawful vaccine mandates. 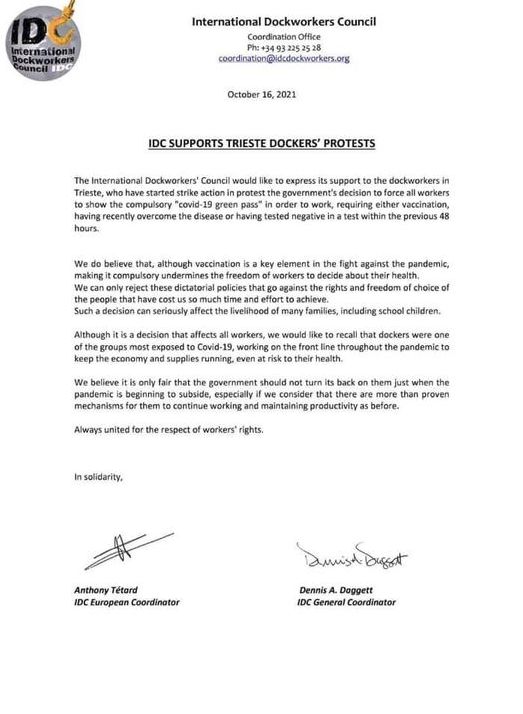 “The International Dockworkers’ Council would like to express its support to the dockworkers in Trieste, who have started strike action in protest (of) the government’s decision to force all workers to show the compulsory ‘covid-19 green pass’ in order to work, requiring either vaccination, having recently overcome the disease or having tested negative in a test within the previous 48 hours,” the IDC statement opened.

“We do believe that, although vaccination is a key element in the fight against the pandemic, making it compulsory undermines the freedom of workers to decide about their health,” the IDC added. “We can only these reject these dictatorial policies that go against the rights and freedom of choice of the people that have cost us so much time and effort to achive. Such a decision can seriously affect the livelihood of many families, including school children.”

“Although it is a decision that affects all workers, we would like to recall that dockers were one of the groups most exposed to Covid-19, working on the front line throughout the pandemic to keep the economy and supplies running, even at risk to their health,” the IDC continued.

“We believe it is only fair that the government should not turn its back on them just when the pandemic is beginning to subside, especially if we consider that there are more than proven mechanisms for them to continue working and maintaining productivity as before,” the statement said.

“Always united for the respect of workers’ rights,” the statement concluded. It was signed by Anthony Tetard, the IDC European Coordinator, and Dennis A Daggett, the IDC General Coordinator.

The world has been in the throes of a supply chain crisis due to numerous factors. But the vaccine mandates and the so-called ‘passports,’ known as the ‘green pass’ in Italy, have added to the complications. Workers have gone on both silent and public strike; but Italy has been the site of many of the most vocal protests against the vaccine mandates.

Italian dock workers go on an "indefinite blockade" to protest against covid passports to be allowed to work.

Thousands of people joined the workers strike in solidarity in Trieste, the largest port in Italy. pic.twitter.com/LW1D44tpjM

'National' strikes against the “GreenPass”, military aviation union ,dock workers , teachers among many others !

"We believe in our constitution not dictatorship" 👇🇮🇹 pic.twitter.com/nqQvqb91d0

As commentator Peter Sweden noted, the workers are not striking against the vaccines themselves, but against the immoral vaccine mandates.

Here's the thing about the strikes in Italy.

Many of them are vaccinated, but they are still refusing covid passports.

The dock workers are standing together in solidarity against the draconian mandates.

“Here’s the thing about the strikes in Italy. Many of them are vaccinated, but they are still refusing covid passports,” Sweden commented. “The dock workers are standing together in solidarity against the draconian mandates.”

In the United States, there reports of ports along the West Coast operating at a standstill, including in Los Angeles and in Tacoma, Washington.

A man on the scene in Tacoma, Washington video records dozens of semi-tractor trailers on standby near the port awaiting for cranes to deliver shipments. None of them have been operating. Video by @chasman52 pic.twitter.com/4gg89Yvnu1

On Tuesday, the Biden administration gave Americans advanced warning that the supply chain disruption is expected to last throughout the holiday season.

In the United Kingdom, a ports boss warned that dockworkers unions were threatening to go on strike, while HGV drivers have already gone on strike.

“Tim Morris, head of the Major Ports Group, which represents operators, said that despite the Government saying the supply chain crisis is getting better, we should not ‘fool ourselves’,” the Daily Mail reported.

“This week has seen improvements in what we call stack levels, so the amount of containers, for example, sat on the ground. But let’s not fool ourselves. It has been an extraordinarily busy 12 months now,” Morris said on Sky News.

“And what we’ve seen over the last week, fortnight, have been some of the UK supply chain congestion issues sort of matching up and catching ports… between surging global demand and shipping and very congested inland here in the UK,” he added.

Meanwhile, the British government is reportedly calling in the army to help relieve the supply bottlenecking.

“Earlier today, an army truck was pictured picking up supplies as part of a routine operation in Southampton,” the Daily Mail noted. “It comes after the Unite union revealed last night that it is to ballot thousands of supermarket and delivery drivers over a mass walkout over the coming days – the largest strike threat of its kind since the notorious Winter of Discontent more than 40 years ago.”

Transportation Secretary Pete Buttigieg, who is about to go on Paternity Leave amidst the supply chain chaos, appeared on CNN’s State of the Union on Sunday. He predicted that the supply chain disruption is expected to continue into next year.

“Certainly, a lot of the challenges that we have been experiencing this year will continue into next year,” Buttigieg said. “But there are both short-term and long-term steps that we can take to do something about it. Part of what’s happening isn’t just the supply side, it’s the demand side. Demand is off the charts. Retail sales are through the roof. If you think about those images of ships, for example, waiting at anchor on the west coast, every one of those ships is full of record amounts of goods that Americans are buying, because demand is up, because income is up, because the president has successfully guided this economy out of the teeth of a terrifying recession.”

“Now the issue is, even though our ports are handling more than they ever have, record amounts of goods coming through, our supply chains can’t keep up,” he claimed. “Of course, our supply chains – that’s a complicated system that is mostly in private hands and rightly so. Our role is to be an honest broker, bring together all of the players, secure commitments and get solutions that will make it easier.”

“Inflation is skyrocketing, as I don’t need to tell you,’ Jake Tapper pointed out. “The prices for home heating costs, cars, groceries, furniture, rent, gasoline are hitting Americans right in the wallet. The White House response has been generally to say ‘hey, inflation shows that we’re coming out of the recession, so it’s a good sign.’ President Biden’s Chief of Staff Ron Klain enthusiastically retweeted an economist who had said in part, ‘most of the economic problems we’re facing, inflation, supply chains, etc., are high class problems.’”

“Now, I get the larger point that when we’re talking about economics, we’re coming out of recession,” Tapper said. “But doesn’t it seem tone deaf to say that rising prices and empty grocery store shelves are high class problems? Isn’t that a bit dismissive?”

“Well, that’s not exactly what the tweet said nor the retweet of the original tweet, which is what we’re talking about here,” she claimed, dishonestly. “It is true, though, Jake, and economists will tell you this. And I know you’ve interviewed some of them as well, that the fact is, the unemployment rate is about half what it was a year ago. So a year ago, people were in their homes, 10 percent of people were unemployed. Gas prices were low because nobody was driving. People weren’t buying goods because they didn’t have jobs. Now more people have jobs. More people are buying goods. That’s increasing the demand. That’s a good thing.”

There is a surge in demand that is causing a drastic spike in shipments across the globe. The Covid pandemic is certainly causing staffing issues for dock workers, truckers, and other vital links in the supply chain. But the supply chain bottlenecks are being exacerbated by unethical vaccine mandates that are now fueling resistance among workers. If the international dock workers and the truckers strike – Americans will feel the pain. And they will know who to blame: Not the workers, but the lawless and inept Biden administration.