The Federal Bureau of Investigation has been completely exposed as a weaponized political tool of radical Democrats. The FBI was revealed to have used counter-terrorism tactics against U.S. parents concerned about the immoral politicization of their public schools.

A “whistleblower” has come forward to hand over chilling documentation of the FBI’s counterterrorism operations to the House Judiciary Committee. The whistleblower reveals that an FBI email on the issue was sent the day before the Attorney General ostensibly committed perjury before Congress—a pattern among Biden administration officials by no means unique to Merrick Garland.

A letter from the House Judiciary Committee to Attorney General Merrick Garland signed by Ranking Member Rep. Jim Jordan (R-OH) is breathtaking in its revelations about the FBI’s activities against U.S. parents.

“Last month, during your testimony before the Judiciary Committee, you testified that the Department of Justice and Federal Bureau of Investigation were not using federal counterterrorism tools to target concerned parents at local school board meetings,” the letter states.

“We are now in receipt of a protected disclosure from a Department whistleblower showing that the FBI’s Counterterrorism Division is compiling and categorizing threat assessments related to parents, including a document directing FBI personnel to use a specific ‘threat tag’ to track potential investigations,” the letter added. “This new information calls into question the accuracy and completeness of your sworn testimony.”

“On October 21, 2021, you testified that the Department and its components were not using counterterrorism statutes and resources to target concerned parents at school board meetings,” the letter goes on. “Specifically, you testified that you could not ‘imagine any circumstance in which the Patriot Act would be used in the circumstances of parents complaining about their children, nor… a circumstance where they would be labaled as domestic terrorists.”

“You also testified: ‘I do not think that parents getting angry at school boards for whatever reason constitute domestic terrorism. It’s not even a close question’.”

In October, Attorney General Merrick Garland was called to account before Congress for The Department of Justice seizing upon the National School Board Association’s memo, which alleged concern over ‘domestic terrorism’ potentially being committed by concerned parents.

“You said a moment ago you couldn’t imagine a parent being labeled a ‘domestic terrorist’,” Rep. Louis Gohmert said at the hearing. “But parents all over the country believe that is exactly what you labeled them by your memo indicating you were going to get involved in board meetings, school board meetings, because of the threat of domestic terrorism.”

“So, if you can’t imagine a parent being labeled a ‘domestic terrorist,’ I would encourage you to redo your memo so it’s not so perceived as being so threatening to people concerned about their kid’s education,” he added.

Senator Ted Cruz also berated Garland for being unable to substantiate the complaints alleged in the NSBA letter. Even as the attorney general was grilled on the matter, he gave shifty answers and generally dodged the issue.

The new whistleblower’s account to the House Judiciary Committee explains why.

“We have not received a disclosure from a Department whistleblower calling into question the accuracy and completeness of your testimony,” the letter continues. “The whistleblower provided an FBI email dated October 20—the day before your testimony—and sent ‘on behalf of’ the FBI’s Assistant Director for Counterterrorism Division and the Assistant Director for the Criminal Division.”

“The email, which is enclosed, referenced your October 4 directive to the FBI to address school board threats and notified FBI personnel about a new ‘threat tag’ created by the Counterterrorism and Criminal Divisions,” the letter states. “The email directed FBI personnel to apply this new threat tag to all ‘investigations and assessments of threats specifically directed against school board administrators, board members, teachers and staff’.”

“The email articulated the purpose as ‘scop[ing] this threat on a national level and provid[ing] an opportunity for comprehensive analysis of the threat picture for effective engagement with law enforcement partners at all levels,” the letter said. The email is shown below. 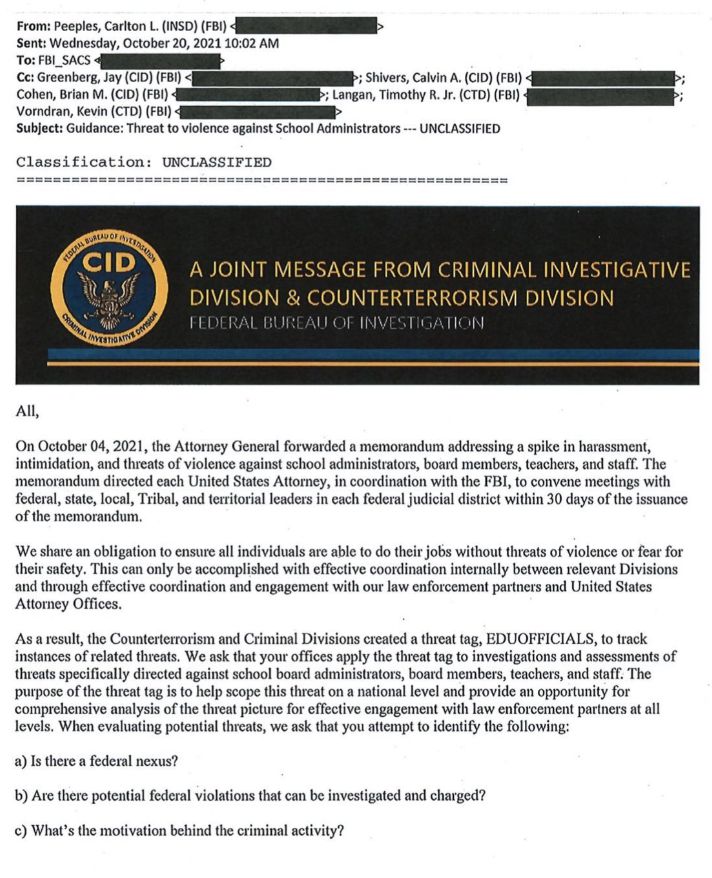 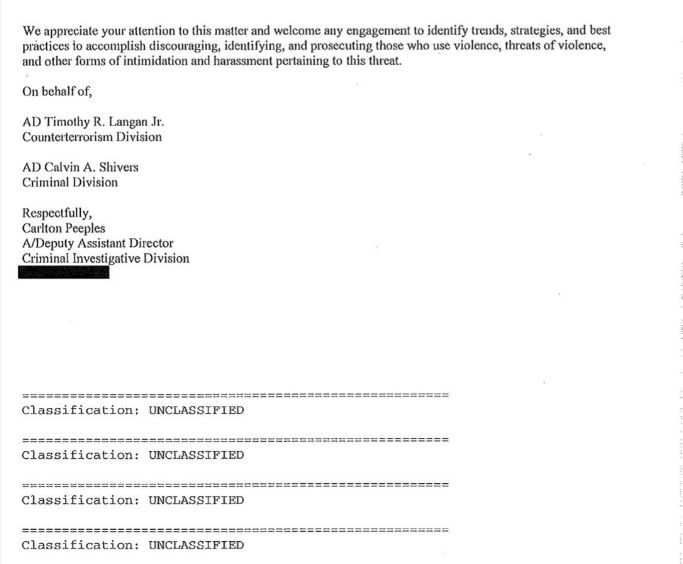 “This disclosure provides specific evidence that federal law enforcement operationalized counterterrorism tools at the behest of a left-wing special interest group against concerned parents,” the letter continued. “We know from public reporting that the National School Boards Association coordinated with the White House prior to sending a letter dated September 29 to President Biden labeleing parents as domestic terrorists and urging the Justice Department to use federal tools—including the Patriot Act—to target parents. Just five days later, on October 4, you issued a memorandum directing the FBI and other Departmental components to address a purported ‘disturbing spike in harassment, intimidation, and threats of violence’ at school board meetings’.”

“As the whistleblower’s disclosure shows, the FBI’s Counterterrorism Division quickly effectuated your directive,” the letter adds. “The FBI’s actions were an entirely foreseeable—and perhaps intended—result of your October 4 memorandum.”

The House Judiciary Committee letter than invited the Attorney general to “amend your testimony as to whether the Department or any of its components has used or is using counterterrorism resources or tools for the purpose of investigating, tracking, or prosecuting threats relating to school board meetings.” The letter then demanded that the Justice department comply with outstanding requests for information to independently verify the serious allegations, as well as a warning against retaliation against whistleblowers. It can be read in full below:

This week, the news broke for most Americans that the NSBA indeed had colluded with the White House, although Becker News reported this in early October. Fox News reported:

Viola Garcia, the NSBA president whom the Department of Education later named to a federal board, sent a memo to NSBA members on Oct. 11 (but dated Oct. 12), providing a timeline of the NSBA’s interaction with the White House ahead of the letter to Biden, which the NSBA sent on Sept. 29.
Five days later, on Oct. 4, the DOJ issued a memo directing law enforcement to investigate threats to school boards. On Oct. 22, the NSBA issued an apology for the letter.

The whistleblower’s disclosure further estbalishes that the Biden administration weaponized a fraudulent letter—one initially spearheaded by the White House—to unleash counterterrorism resources against concerned parents. This is a massive betrayal of public trust with immense ramifications for American politics.