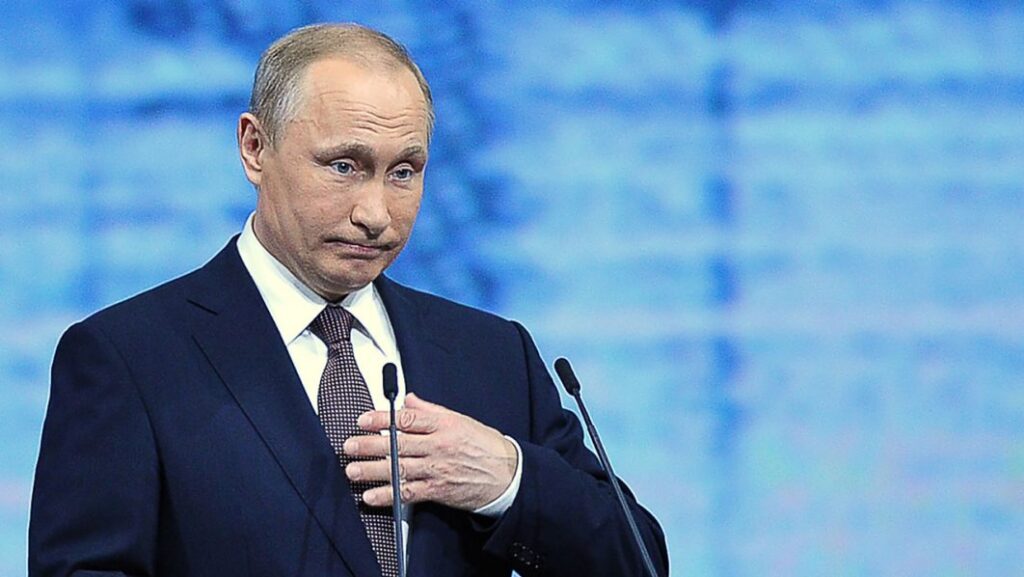 Russian president Vladimir Putin has been “canceled” from the World Economic Forum. The Russian leader is banned from attending the annual gathering of global elites at Davos, Switzerland.

“The World Economic Forum, best known as the host of an annual meeting of elites in Davos, Switzerland, says it’s freezing all its relations with Russian entities following the invasion of Ukraine,” the Huffington Post reported.

“Russian President Vladimir Putin last participated in the event at a virtual ‘Davos Agenda’ meeting in January 2021. Previously, he attended the event in person,” the report added.

WEF said in a statement on Thursday about Russian officials that it “will not engage with any sanctioned individual or institution in any of our activities.”

Big Tech giants have launched an all out assault on Russia’s digital and social media users in the aftermath of the Ukraine invasion: Deplatforming Russian state media sites, demonetizing users on Instagram and YouTube, and blocking access within the country.

“Russian agents came to the home of Google’s top executive in Moscow to deliver a frightening ultimatum last September: take down an app that had drawn the ire of Russian President Vladimir Putin within 24 hours or be taken to prison,” WaPo reports.

“Google quickly moved the woman to a hotel where she checked in under an assumed name and might be protected by the presence of other guests and hotel security, according to people with knowledge of the matter,” the report added. “The same agents — believed by company officials to be from Russia’s FSB, a successor to the KGB intelligence service — then showed up at her room to tell her the clock was still ticking.”

“Within hours, an app designed to help Russians register protest votes against Putin could no longer be downloaded from Google or Apple, whose main representative in Moscow faced a similarly harrowing sequence,” the report continued. “Titans of American technology had been brought to their knees by some of the most primitive intimidation tactics in the Kremlin playbook.”

Prior to these tech companies taking action against Russia, Putin implemented authoritarian policies, such as mass censorship that entailed massive fines for refusing to cooperate with the Kremlin.

“Amid this internal offensive, Putin also moved to bring foreign technology companies to heel,” WaPo reported. “Moscow deployed new devices that let it degrade or even block Russians’ access to Facebook and Twitter, imposed fines totaling $120 million on firms accused of defying Kremlin censors, and ordered 13 of the world’s largest technology companies to keep employees in Russia and thus exposed to potential arrest or other punishment for their employers’ actions — a measure that U.S. executives refer to as the ‘hostage law’.”

Thus, the Russian invasion of Ukraine provides these tech giants with a prime opportunity for payback against Putin. That retaliation has also extended to the World Economic Forum, whose partners include some of the biggest tech companies in the world: Google, Meta, and Microsoft.

Vladimir Putin has known World Economic Forum executive chairman Klaus Schwab since 1992 and has spoken at Davos on several occasions; most recently in January 2021.

In his recent speech, Putin was “highly critical of US social media and big tech.”

“Digital giants have been playing an increasingly significant role in wider society,” Putin said via videoconference. “In certain areas they are competing with states … Here is the question, how well does this monopolism correlate with the public interest? Where is the distinction between successful global businesses, sought-after services and big data consolidation on the one hand, and the efforts to rule society […] by substituting legitimate democratic institutions, by restricting the natural right for people to decide how to live and what view to express freely on the other hand?”

Putin went on to discuss the impact of the coronavirus pandemic on the global digital landscape.

“Indeed, it is difficult to overlook the fundamental changes in the global economy, politics, social life, and technology,” Putin said. “The coronavirus pandemic, which Klaus just mentioned, which became a serious challenge for humankind, only spurred and accelerated the structural changes, the conditions for which had been created long ago. The pandemic has exacerbated the problems and imbalances that built up in the world before. There is every reason to believe that differences are likely to grow stronger. These trends may appear practically in all areas.”

“Needless to say, there are no direct parallels in history,” Putin added. “However, some experts – and I respect their opinion – compare the current situation to the 1930s.”

Klaus Schwab has been associated with promoting a “Great Reset,” the title of his book, which capitalizes on the Covid-19 pandemic to accelerate changes in the digital and structural transformation of the global economy. (Copy provided below).

Putin’s position doesn’t appear to square with reports that he was himself a “Young Global Leader” at the World Economic Forum. However, this claim, made by Klaus Schwab himself, appears to be false.

“When I mention names like Ms. Merkel, even Vladimir Putin and so on, they have all been Young Global Leaders of the World Economic Forum. But what we are really proud of now is the young generation, like Prime Minister Trudeau, President of Argentina and so on,” he claimed.

Putin’s anti-globalist worldview is perhaps best encapsulated by his famous Munich speech in 2007.

“The unipolar world that had been proposed after the Cold War did not take place either,” he continued. “The history of humanity certainly has gone through unipolar periods and seen aspirations to world supremacy. And what hasn’t happened in world history?”

“However, what is a unipolar world?” he said. “However one might embellish this term, at the end of the day it refers to one type of situation, namely one centre of authority, one centre of force, one centre of decision-making.”

“It is a world in which there is one master, one sovereign,” he said. “And at the end of the day this is pernicious not only for all those within this system, but also for the sovereign itself because it destroys itself from within. And this certainly has nothing in common with democracy.”

But Russia has nonetheless been pulled closer into the globalizing economy, creating friction with the leader’s efforts to remain autonomous. In October 21, 2021, the World Economic Forum announced that Russia would be joining what it refers to as the “Fourth Industrial Revolution.”

“Part of the Forum’s global Network, the new Centre will bring together leading businesses, policy makers and members of civil society to co-design and pilot innovative approaches to technology governance.”

“We stand on the brink of a technological revolution that will fundamentally alter the way we live, work, and relate to one another,” Schwab said. “In its scale, scope, and complexity, the transformation will be unlike anything humankind has experienced before. We do not yet know just how it will unfold, but one thing is clear: the response to it must be integrated and comprehensive, involving all stakeholders of the global polity, from the public and private sectors to academia and civil society.”

“Like the revolutions that preceded it, the Fourth Industrial Revolution has the potential to raise global income levels and improve the quality of life for populations around the world,” Schwab claimed.

The World Economic Forum’s executive chairman then discussed in his piece how digital transformation will impact civil-state relations.

“As the physical, digital, and biological worlds continue to converge, new technologies and platforms will increasingly enable citizens to engage with governments, voice their opinions, coordinate their efforts, and even circumvent the supervision of public authorities,” he said. “Simultaneously, governments will gain new technological powers to increase their control over populations, based on pervasive surveillance systems and the ability to control digital infrastructure.”

Schwab also discussed the future of warfare due to the so-called Fourth Industrial Revolution.

“The Fourth Industrial Revolution will also profoundly impact the nature of national and international security, affecting both the probability and the nature of conflict,” he said. “The history of warfare and international security is the history of technological innovation, and today is no exception. Modern conflicts involving states are increasingly ‘hybrid’ in nature, combining traditional battlefield techniques with elements previously associated with nonstate actors. The distinction between war and peace, combatant and noncombatant, and even violence and nonviolence (think cyberwarfare) is becoming uncomfortably blurry.”

“As this process takes place and new technologies such as autonomous or biological weapons become easier to use, individuals and small groups will increasingly join states in being capable of causing mass harm,” he added. “This new vulnerability will lead to new fears. But at the same time, advances in technology will create the potential to reduce the scale or impact of violence, through the development of new modes of protection, for example, or greater precision in targeting.”

The evolution of war due to this new ‘industrial revolution’ has been sometimes referred to as Fifth Generation (5G) warfare. Harvard Business Review published a letter from Umair Haque to then-President Obama in 2009 on 5G warfare.

“There’s a war going on in America today: an information war, being waged digitally,” Haque wrote. “It’s not physically violent — but it’s culturally, socially, and economically violent. And its ultimate goal is that of any war: political defeat.”

“4G war was network against state. Think Al-Qaeda vs America. 5G war is network against network, market against market, community against community,” he added. “And the problem is that the right has a network, and are utilizing it to learn the art of 5G warfare — but you don’t, and you aren’t.”

Haque called for U.S. leaders to attack their enemies, naming conservative thinkers popular at the time.

“Your best bet is to attack not the enemy’s front-lines — Rush Limbaugh, Sean Hannity, and Sarah Palin — but the base of hard-liners who still oppose reform — hard, swiftly, and repeatedly, with better information faster,” he noted.

Vladimir Putin can now be added to those ranks.

U. of Chicago Prof. Predicted the Ukraine Crisis in 2015 and How It Would Be the West’s Fault