New York Governor Kathy Hochul on Humiliating Defeat of Covid Vaccine Mandates: “I Would Do It All Over Again” 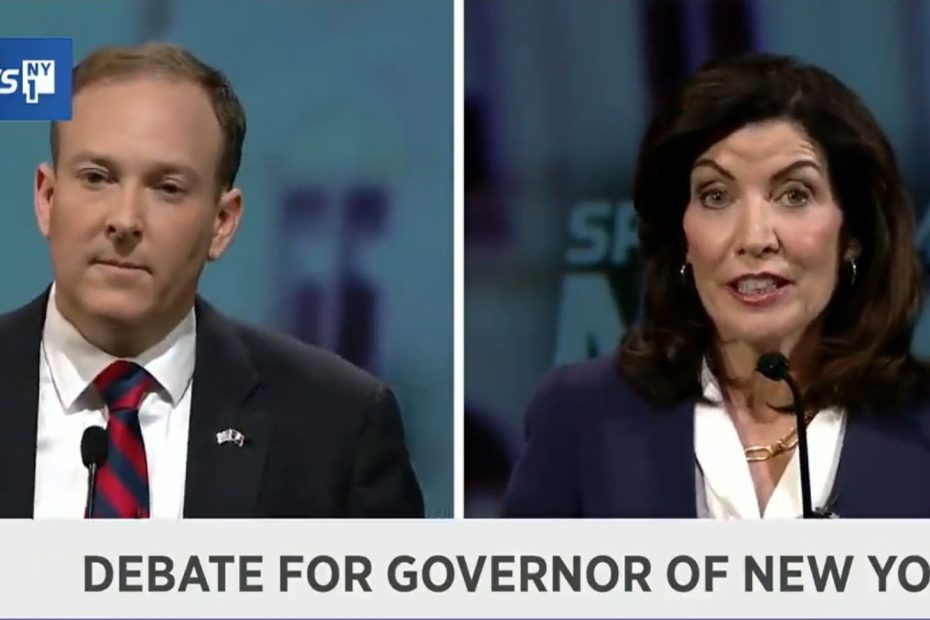 The judge ruled on Monday that the New York City Sanitation Department had to cease enforcing proof of vaccination, and furthermore, that the workers had to be reinstated and given back pay on Tuesday. 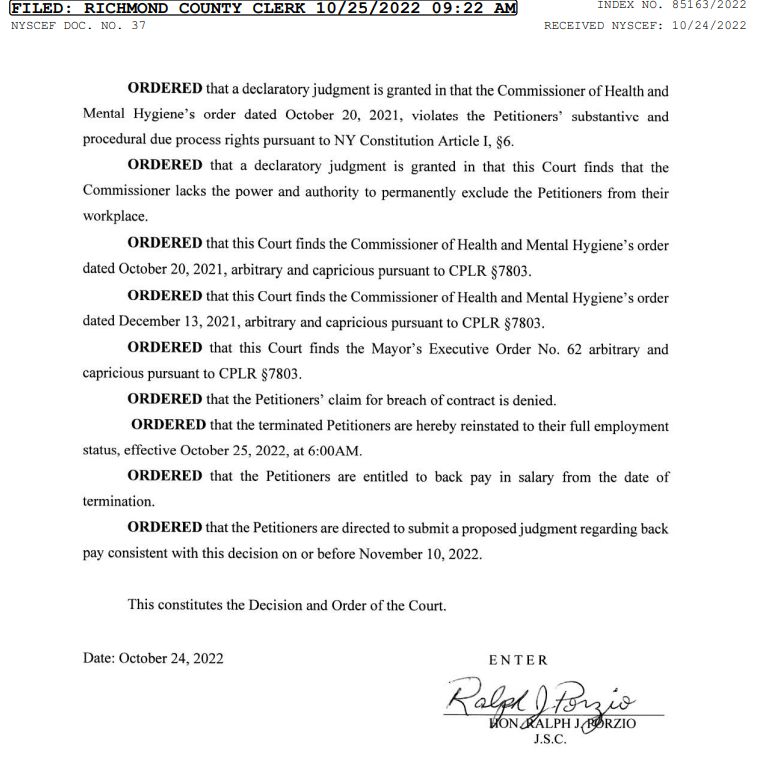 The attorney in the case,  Chad Laveglia, told NYC for Yourself that the ruling was a victory for all New York City workers.

“So we just defeated the vaccine mandate for every single city employee, not just sanitation, FDNY, NYPD, Department of Corrections,” he added. “For all the brave men and women who have been our first responders and have been brave through all this. You’re now free and you should be able to go back to work.”

A spokesman for the New York City Law Department said in a statement that the city “strongly disagrees with this ruling as the mandate is firmly grounded in law and is critical to New Yorkers’ public health.”

The ruling was circumscribed in its ramifications. While the court ruled on behalf of the government workers, it did not challenge the Public Health Authority’s ability to issue temporary vaccination orders in the event of emergencies.

“This Court does not have a basis to disagree with temporary vaccination orders during a public health emergency, however, ordering and enforcing that vaccination policy on only a portion of the populace for an indefinite period of time, is akin to legislating,” the judge stated. “It appears that in issuing this indefinite order, usurping the power of the legislature, the Health Commissioner has acted beyond his authority.” The judge cited the ruling invalidating New York’s “toddler mask mandate.”

The sanitation workers also raised a conflict with the vaccine order in that they already possessed natural immunity to Covid from prior infection. Since it has been demonstrated that Covid vaccine mandates do not stop the transmission of the virus, and natural immunity has been shown repeatedly to be roughly equivalent if not superior to vaccinated immunity, the litigants made the case that the vaccine mandate was effectively moot. However, the court did not base its ruling on this argument, nor on fundamental issues of human rights, but rather on separation of powers grounds.

Thus, while it is a victory for the sanitation workers, it does not forestall New York governors or other politicians from issuing such ’emergency’ orders in the future. On Tuesday, Tucker Carlson discussed the New York ruling, as well as a similar ruling in the State of Massachusetts.

“It turns out everything they told you about the Covid vaccine was a flat-out lie,” Tucker said. “I hate to say that out loud, because almost everybody got it. There’s something you can do about it now. So why bring it up now? Why rehash these depressing facts?”

“Because the government, federal and state governments and local governments, are still firing people for not taking a shot that doesn’t help them and could hurt them,” he added. “So what? People have already been fired for this because they actually believed it was their body, their choice. Well, most of them are still fired, but we do have some good news to report on that front.”

“Tonight in Massachusetts, the Department of Transportation just offer jobs to all on vaccinated employees it fired. It’s about time,” he continued. “Hopefully they’ll get some kind of back pay. Hopefully they sue for damages. They should. And in New York, the State Supreme Court, which is a trial level court, just reinstated all New York City government employees who were fired for being quote unvaccinated, because it was a ‘pandemic of the unvaccinated.’ Now the liars who told you that have not been punished, but at least some people are getting their jobs back in New York, the city’s been ordered to give them back pay.”

The State of New York and the City of New York have constantly pushed orders beyond their legal authority. Governor Andrew Cuomo, his successor Kathy Hochul, and New York City Mayor Eric Adams have constantly tested the courts’ ability to expeditiously issue stays and rulings that strike the orders down.

At the New York governor’s race debate on Tuesday, current unelected Governor Kathy Hochul insisted that she would not have done anything differently, regardless of the courts constantly rebuking the state’s lawless orders.

Kathy Hochul Shows No Remorse for Firing Unvaxed Healthcare Workers: "I Would Do It All Over Again" pic.twitter.com/7K98y26J8G

“I would to it all over again,” Hochul said.

In her answer, she flatly lies by implying that the Covid shots prevent infection and transmission. They do not.

Rep. Lee Zeldin, her challenger, drew a sharp contrast with the governor.

Rep. Lee Zeldin: "Let me be clear to all of the parents who are out there: I will not mandate COVID vaccines for you kids, EVER." pic.twitter.com/zDMa4EYE6r

“Let me be clear to all of the parents who are out there: I will not mandate COVID vaccines for you kids, EVER,” Zeldin said.

It will ultimately be up to New Yorkers if they want to live under a perpetual tyranny based on endless “public health emergencies” or they want to reimplement sane, constitutional governance. They will have the opportunity to do that beginning on November 8.