Former U.S. embassy official George Kent, one of the star witnesses in the Trump impeachment trial, was the author of an email dated November 22, 2016. The emails were obtained by Just the News under Freedom of Information Act request.

“The real issue to my mind was that someone in Washington needed to engage VP Biden quietly and say that his son Hunter’s presence on the Burisma board undercut the anti-corruption message the VP and we were advancing in Ukraine,” Kent bluntly wrote.

“Kent’s email described an intense pressure campaign by advocates for Burisma — including a former U.S. ambassador — to rehabilitate the Ukrainian company’s corrupt reputation and to get Ukraine prosecutors to drop their criminal investigations of the company,” Just the News reported.

“Kent even relayed to higher-ups that he had confirmed with Ukrainian prosecutors that Burisma officials had paid a $7 million ‘bribe’ to make one of the cases against the company disappear. The bribe was allegedly paid at a time when Hunter Biden was serving on the Burisma board, a job that landed his firm more than $3 million from the Ukrainian energy company.”

“Kent explained to the officials in Washington that Burisma’s long reputation for alleged corruption and anecdotes like the bribe were one of the main reasons Hunter Biden’s affiliation with the company proved harmful to U.S. efforts to fight Ukrainian corruption,” the report continued.

“The recipients of the email included Jorgan K. Andrews, then the-Deputy Assistant Secretary of State in the Bureau of International Narcotics and Law Enforcement Affairs,” Just the News notes.

“I should note that there were two American members of the Burisma board: Hunter Biden and Devon Archer,” another State official on the email chain wrote Kent and Andrews. “Archer was recently indicted in a federal fraud case.”

Archer refers to Hunter Biden’s former business associate Devon Archer, who is reported to have “cooperated completely” with investigators probing Hunter’s tax filings, and who has been formerly sentenced in an unrelated fraud case.

The declassified letter obtained by Just the News can be read below:

It appears from the email that Burisma’s corruption was a known quantity well before Hunter Biden ever became a part of its board. 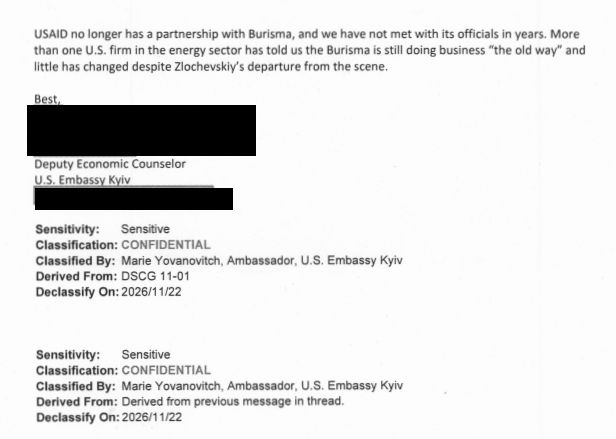 “USAID no longer has a partnership with Burisma, and we have not met with its officials in years,” the Deputy Economic Counselor at the U.S. Embassy in Kiev wrote. “More than one U.S. firm in the energy sector has told us the [sic] Burisma is still doing business ‘the old way’ and little has changed despite Zlochevskiy’s departurem from the scene.”

As reported by Bloomberg in 2020, bribes worth millions of dollars were offered to Ukrainian officials to close corruption investigation probes into Mykola Zlochevsky, who is the owner of Burisma.

“Top anti-graft officials in Ukraine were offered a $6-million bribe to close a case against ex-official Mykola Zlochevsky, who is also the owner of gas company Burisma Holdings, the company that was at the center of the impeachment trial of U.S. President Donald Trump,” Bloomberg reported.

“Three people have been detained as a part of a criminal investigation opened on June 3 into the bribery attempt, Artem Sytnyk, the head of the National Anti-Corruption Bureau said at a press conference on Saturday,” the report added. “The suspects include two people associated with Zlochevsky, a former minister of environmental protection under then-President Viktor Yanukovych, who fled to Russia in February 2014 after mass protests. Zlochevsky’s whereabouts are unknown.”

Both George Kent and Maria Yonanovitch are named in the email thread, and both testified on behalf of Democrats against Donald Trump at the second impeachment trial. The impeachment prosecution overall painted the picture that the former president’s inquiries into potential Ukrainian corruption involving the future president Joe Biden’s son were completely improper.

But George Kent actually told congressional investigators that he warned the State Department about the serious conflict of interest represented by Hunter Biden’s Ukraine position.

“A career State Department official overseeing Ukraine policy told congressional investigators this week that he had raised concerns in early 2015 about then-Vice President Joe Biden’s son serving on the board of a Ukrainian energy company but was turned away by a Biden staffer, according to three people familiar with the testimony,” the Washington Post reported in October 2019. Those warnings would go unheeded.

“Kent said he had concerns that Ukrainian officials would view Hunter Biden as a conduit for currying influence with his father,” anonymous sources told The Post. “But when Kent raised the issue with Biden’s office, he was told the then-vice president didn’t have the “bandwidth” to deal with the issue involving his son as his other son, Beau, was battling cancer, said the people familiar with his testimony.

We now know that is not the case. Even the New York Times is now asking questions after dismission the Hunter Biden laptop as ‘unconfirmed,’ while other media outlets said it was a product of Russian disinformation.

“The New York Times has sued the State Department for allegedly dragging its feet in handing over emails from Romanian embassy officials connected to Hunter Biden and his famed former business associate Tony Bobulinski,” the Daily Mail reported on Tuesday.

“The lawsuit, filed Monday in Manhattan federal court, seeks emails dating 2015 to 2019,” the article states. “The Times alleges that the State Department is failing to address its Freedom of Information Act (FOIA) request in a timely manner. When the Times asked when the State Dept. would get around to the request, the paper was told to expect an answer on April 15, 2023, according to Politico.”

“The Times appears to be looking into whether embassy personnel did any special favors on behalf of business officials, including the president’s son and Bobulinski. Joe Biden was serving as vice president for two of the years the emails cover, 2015-2016,” the article added.

Now that Biden is mobilizing thousands of troops into Eastern Europe in the face of Russian aggression towards Ukraine, while shunning diplomatic tools such as sanctioning the Nordstream 2 pipeline that runs through Ukraine, such questions about official corruption swirling around the president and his family’s ties are more salient than ever.

The Biden family corruption has gotten so glaring that the New York Post editorial board recently called for the Attorney General to appoint a special counsel to investigate it.

“It’s tricky for any Justice Department to investigate the president and his family,” the Post wrote, adding, “It’s past time for Garland to explain why he hasn’t named a special counsel.”

“This idea has been batted around at least since Hunter’s smelly art sales surfaced,” The Post letter continued. “And the drip of damning news has only continued: a former business partner ‘co-operating completely‘ with the feds; congressional allegations that the Secret Service improperly redacted records relating to Hunter’s travels; news that Hunter’s bank records on his dealings with the Bank of China were subpoenaed in May 2019.”

“That is, the feds have been looking at Hunter since the Obama administration,” the Post added.

Contrary to the mainstream media’s incessant four-year delusions about Trump-Russia collusion, the Biden foreign policy much more accurately tracks with the implication that the Chinese and Ukrainians have plenty of dirt on the First Family.

If the President of the United States is truly compromised by family corruption, it is the duty of journalists to expose it. No amount of political expediency or pointing at the former president lets them or the Bidens off the hook.