Newly released documents reveal in depth how the National Institute of Allergy and Infectious Disease, headed by none other than Dr. Anthony Fauci, funding the U.S.-based non-profit EcoHealth Alliance performing “high-risk” research with the Wuhan Institute of Virology in China.

Although The Intercept’s report itself is sparse detailing the contents of the documents, they provide a clearer picture of the kind of research being conducted by EcoHealth Alliance, the Wuhan Institute of Virology, and even the Wuhan University Center for Animal Experiment, which now becomes another potential source of a lab leak for the SARS-CoV-2 virus.

The grant proposals and reporting contained in the documents show how cozy Dr. Peter Daszak’s group was with the Wuhan Institute of Virology. 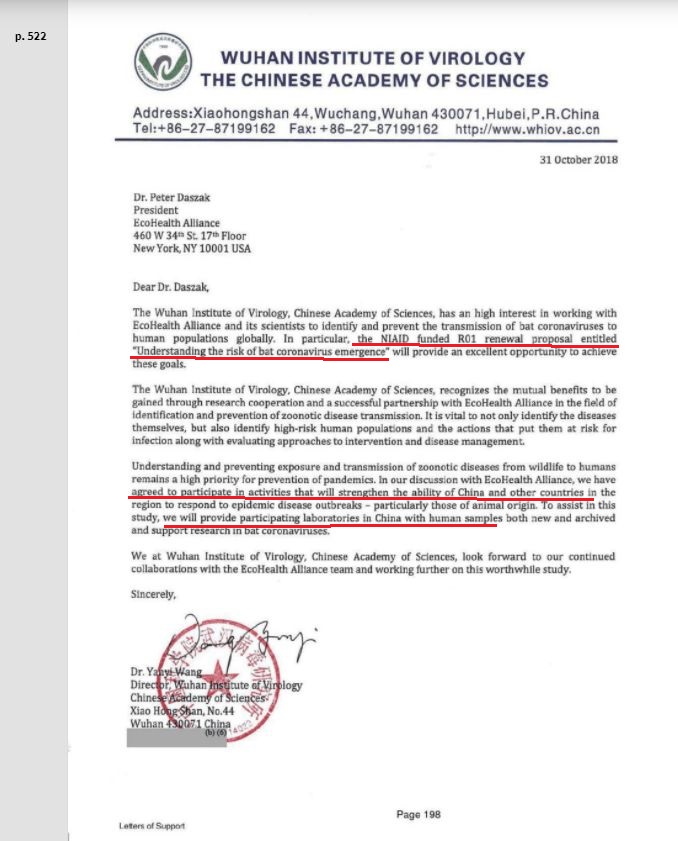 “The Wuhan Institute of Virology, Chinese Academy of Sciences, has an high interest in working with Eco Health Alliance and its scientists to identify and prevent the transmission of bat coronaviruses to human populations globally,” Dr. Yanyi Wang, Director of the Wuhan Institute of Virology writes to Dr. Peter Daszak. “In particular, the NIAID funded R01 renewal proposal entitled ‘Understanding the risk of bat coronavirus emergence‘ will provide an excellent opportunity to achieve these goals.”

“The Wuhan Institute of Virology, Chinese Academy of Sciences, recognizes the mutual benefits to be gained through research cooperation and a successful partnership with EcoHealth Alliance in the field of identification and prevention of zoonotic disease transmission,” the letter adds. “It is vital to not only identify the diseases themselves, but also identify high-risk human populations and the actions that put them at risk for infection along with evaluating approaches to intervention and disease management.”

“Understanding and preventing exposure and transmission of zoonotic diseases from wildlife to humans remains a high priority for prevention of pandemics,” the letter adds. “In our discussion with EcoHealth Alliance, we have agreed to participate in activities that will strengthen the ability of China and other countries in the region to respond to epidemic disease outbreaks – particularly those of animal origin. To assist in this study, we will provide participating laboratories in China with human samples both new and archived and support research in bat coronaviruses.”

As documented exhaustively, after the Covid-19 pandemic in late 2019, China did not show much concern about it spreading to the rest of the world. According to a U.S. intelligence report obtained by the Wall Street Journal, three researchers at the Wuhan Institute of Virology were documented as being sick with “symptoms consistent with both Covid-19 and common seasonal illness.”

The Associated Press reported in April 2020 that China hadn’t warned the public about Covid-19 and the potentiality of human-to-human transmission for “six days,” and finally telling the public on January 20. Obviously, this is more accurately weeks, and nearly two months, according to more recent understanding of developments. Furthermore, China pushed to end travel from Wuhan and Hubei province from January 2020, but pushed to keep open foreign travel through the end of March. It should be noted that Dr. Anthony Fauci publicly opposed Donald Trump’s travel ban on China early on and even praised the communist country’s “transparency.”

The newly released EcoHealth Alliance documents shine an even brighter spotlight on Dr. Fauci, who has made heated denials about NIAID’s funding being utilized at the Wuhan laboratory, and specifically, for risky “gain-of-function” research.

Before Congress, Dr. Fauci got into a charged confrontation with Dr. Rand Paul over the matter of gain-of-function funding.

Dr. Richard Ebright, Board of Governors Professor of Chemistry and Chemical Biology at Rutgers University, lays out how the new documents show that Dr. Fauci and Dr. Francis Collins have been “untruthful” about funding gain-of-function research.

…and thus not only was reasonably anticipated to exhibit enhanced pathogenicity, but, indeed, was demonstrated to exhibit enhanced pathogenicity. The materials further reveal that the the grants also supported the construction–in Wuhan–of novel chimeric MERS-related coronaviruses that combined spike genes from one MERS-related coronavirus with genetic information from another MERS-related coronavirus. The documents make it clear that assertions by the NIH Director, Francis Collins, and the NIAID Director, Anthony Fauci, that the NIH did not support gain-of-function research or potential pandemic pathogen enhancement at WIV are untruthful.