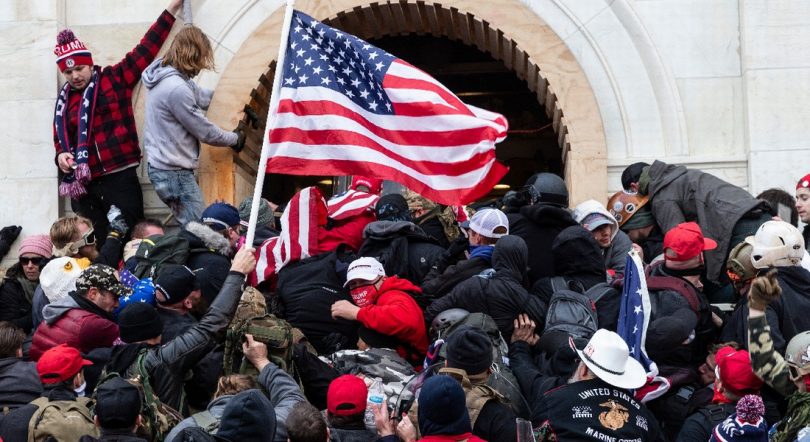 The shadow of the January 6th riots at the U.S. Capitol building has been hovering over the nation for months.

Although the FBI is pursuing criminal offenders who breached the capitol to bring every last one of them to justice, as if they were violent domestic terrorists planning to overthrow the government, newly revealed messages undercut this version of events. Instead, it shows that Capitol riot planners were wrongfully expecting President Donald Trump to invoke the Insurrection Act to maintain power and were preparing for clashes with Antifa activists.

The news came out in court evidence that was released on Tuesday.

“Kelly Meggs, the Florida leader of the Oath Keepers — who’s been charged along with nine others with conspiring to stop Congress from certifying the 2020 election — said in private messages obtained by prosecutors that he’d been in touch repeatedly with Proud Boys leadership in particular. He said he had worked out a strategy to confront potential violence from antifa, a loosely organized collection of left-wing extremists,” Politico reported.

“This week I organized an alliance between Oath Keepers, Florida 3%ers, and Proud Boys,” Meggs wrote on Facebook on December 19 . “We have decided to work together and shut this shit down.”

“We’re going to march with them for awhile then fall to the back of the crowd and turn off,” Meggs continued. “Then we will have the Proud Boys get in front of them the cops will get between antifa and Proud Boys. We will come in behind antifa and beat the hell out of them.”

The issue is that the Antifa contingency that the far-right groups expected to encounter was not readily identifiable. The militaristic gear, which included no known firearms by any of the defendants, was thus arguably in preparation for a riot with expected Antifa and Black Bloc counter-protesters.

The Oath Keepers, Proud Boys, and 3%ers nonetheless participated in the Capitol breach. It is important to note that none of the Capitol rioters are known to have been armed.

“[W]e stormed and got inside,” Meggs wrote in a Signal chat. “Ok who gives a damn who went in there…. We are now the enemy of the State.” Meggs would write again in the same chat: “We aren’t quitting!! We are reloading!!”

On February 17, Meggs was arrested on a criminal complaint charging him with conspiracy, destruction of government property, obstruction of an official proceeding, and entering a restricted building without lawful authority.

But there are multiple signs that the Department of Justice’s prosecution of Capitol rioters is in danger of serious overreach. In January, it was argued by U.S. attorneys that there were “capture and kill” teams at the Capitol riots who intended to target Congressmembers.

“U.S. prosecutors in Arizona said Thursday in a court filing against Jacob Chansley, also known as the ‘QAnon Shaman,’ that they have ‘strong evidence’ members of the pro-Trump mob wanted to ‘capture and assassinate’ officials,” NPR reported.

But Michael Sherwin, acting U.S. attorney for the District of Columbia, later admitted that “investigators have not uncovered direct evidence at this point of any ‘kill/capture teams’ targeting elected officials during the U.S. Capitol insurrection, contradicting allegations made earlier by federal prosecutors in Arizona,” the report noted.

Sherwin more recently appeared on ’60 Minutes’ and made several bombastic claims that may have further damaged the DOJ’s case.

“Michael Sherwin, who until recently was the leader of the Justice Department’s Jan. 6 investigation and the acting U.S. attorney for Washington D.C., told CBS’s ’60 Minutes’ on Sunday that he believes evidence would support a charge of ‘seditious conspiracy’ against some of the rioters,” Politico reported, “a rarely used charge meant to signal an intent to overthrow the government. And anonymous DOJ officials told The New York Times that they believed such a charge would likely be aimed at the Oath Keepers.”

“The reports led a top federal judge to admonish the Justice Department and threaten sanctions Tuesday for comments he said could taint the jury pool and undermine the case against the 10 Oath Keepers,” Politico noted.

“These defendants are entitled to a fair trial, not one that is conducted in the media,” District Court Judge Amit Mehta said in a conference on Tuesday, which included senior supervisors in the U.S. Attorney’s office. “I will not tolerate continued publicity in the media.”

“These kinds of statements in the media have the potential of affecting the jury pool … I intend to enforce that rule vigorously,” said Mehta, who was appointed by former President Obama. “The government, quite frankly, should know better.”

Another thing the government should “know better” about is whether or not Donald Trump himself could be criminally charged for the Capitol riots. Nonetheless, Sherwin again went out on a limb and enaged in irresponsible speculation about the legal matter.

Michael Sherwin: “We have people looking at everything.” https://t.co/JT3n3zANnD pic.twitter.com/EbndYV1nbC

“It’s unequivocal that Trump was the magnet that brought the people to D.C. on the 6th,” replied Sherwin, making a spurious argument.

“So does that mean that Trump is “criminally culpable for everything that happened during the siege, during the breach?” Pelley asked.

“We have plenty of people– we have soccer moms from Ohio that were arrested saying, ‘Well, I did this because my president said I had to take back our house.’ That moves the needle towards that direction,” Sherwin argued.

“Maybe the president is culpable for those actions,” the prosecutor insinuated. “But also, you see in the public record too, militia members saying, ‘You know what? We did this because Trump just talks a big game. He’s just all talk. We did what he wouldn’t do.’”

“In short, you have investigators looking into the president’s role?” asked Pelley.

“We have people looking at everything, correct,” Sherwin replied. “Everything’s being looked at.”

What hasn’t been “looked at” is the actual role that Antifa played in the Capitol riots. There were pro-Antifa activists there in unknown numbers, such as John Sullivan, who videographed the shooting of Ashli Babbitt.

Additionally, expert eyewitnesses have attested to having spotted agents provocateurs amond the Capitol rioters, such as J. Michael Waller, the Senior Analyst for Strategy at the Center for Security Policy, was in attendance at the January 6th uprising.

“The deadly riot at the U.S. Capitol bore the markings of an organized operation planned well in advance of the Jan. 6 joint session of Congress, Waller wrote. “A small number of cadre appeared to use the cover of a huge rally to stage its attack. Before it began, I saw from my vantage point on the West Front of the Capitol what appeared to be four separate cells or units”:

“All of these cells or groups stood out from the very large crowd by their behavior and overall demeanor. However, they did not all appear at the same time. Not until the very end did it appear there was a prearranged plan to storm the Capitol building, and to manipulate the unsuspecting crowd as cover and as a follow-on force,” he added in his first-person account.

Michael Yon, the nation’s most experienced war correspondent, also gave a detailed, persuasive account of the Antifa “agents provocateurs” he said were in the January 6th crowd. His interview with the Epoch Times can be watched below:

Yon relates his experience covering over a hundred protests in Hong Kong, and his knowledge that Antifa trained by watching the protesters there, and brings that to bear in his own eyewitness account of the January 6th riots.

“It was Antifa written all over this,” Yon concluded.

No one sensible is arguing that Antifa or other left-wing activist groups are singularly responsible for the Capitol riots, but the situation during the riot is much more complex than the tendentious narrative in the mainstream media portrays. The newly released communications suggests that the far-right extremists who showed up at the January 6th session of Congress intended to do combat with the usual suspects on the radical left, and not with their own country.

The federal prosecutors in the Capitol rioters’ cases, by all appearances, may be guilty of engaging in politically driven overcharging of defendants; meanwhile, radical activists continue to rampage across America’s cities with little-to-no concern from the Justice Department. If there were an equal standard of justice in America, there would be less cause for concern. But when the case is largely being tried in the media by prosecutors themselves, then the American people are right to question their motives.