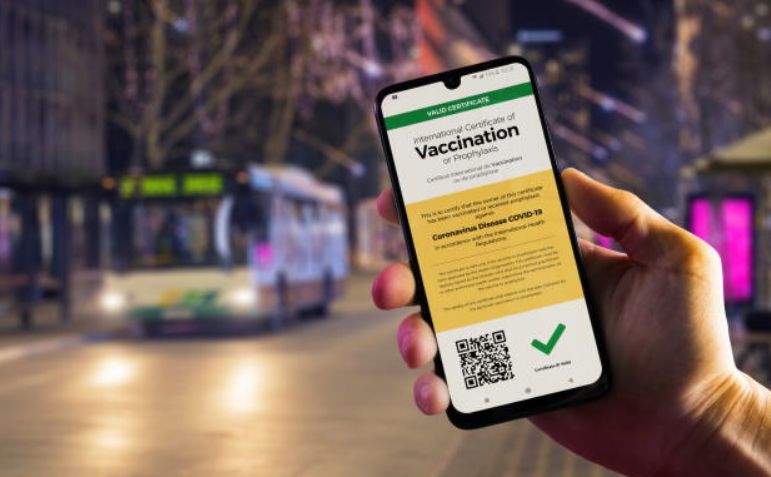 The Biden administration is poised to make its next unconstitutional power grab in the former of a ‘vaccine mandate’ for interstate travel within the United States, according to reports on Capitol Hill.

Congressional Republican lawmakers are attempting to get ahead of the forthcoming expected decree by introducing legislation to block an executive order or directive.

“The federal government has no business imposing vaccine mandates on our people and our hardworking businesses,” Sen. Rick Scott remarked.

“The Supreme Court has already ruled that you cannot be forced to purchase insurance under the commerce clause. Why would president Biden think he could do so with a vaccine mandate?” he asked.

“Travel is critical to getting our economy fully reopened. America’s truckers, shippers, pilots, and delivery men and women play an important role in delivering the goods needed to keep our economy going,” he continued.

“Americans are sick and tired of the government telling them what to do. And the American people are more than capable of making the right decision to protect them, their family, and their neighbors,” he added.

There have been numerous signs in recent weeks that the Biden administration is poised to issue a vaccine mandate for interstate travel, even though it would be blatantly constitutional.

Dr. Anthony Fauci, chief of the NIAID, is typically the messenger that the administration sends out to prime the public for forthcoming extreme measures. Fauci recently supported a vaccine mandate for interstate travel.

“I would support that. If you want to get on a plane and travel, then you should be vaccinated,” Fauci said in an interview on the Skimm This podcast in mid-September.

“Fauci later clarified to say that the Biden administration is not extending its vaccine mandate to travel just yet, although it is under consideration,” NPR noted.

“To overcome covid-19, at least 80 percent of Americans need to be vaccinated,” Emanuel co-wrote in a Washington Post editorial with Cornell professor John P. Moore. “We are now at 54 percent. Voluntary efforts have proved to be insufficient. It is inevitable we will need another mandate — this time for domestic travel by planes, trains and buses.”

“The man who ran former President Barack Obama’s Department of Transportation thinks President Joe Biden is going too soft on airlines and airline travelers as part of the government’s efforts to get the pandemic under control,” Politico reported.

“I don’t think it would be difficult at all. It’s no different than showing your driver’s license to TSA,” LaHood said in an interview. “I don’t see it as a bureaucratic challenge to the airlines. I really don’t. You got to show ID in order to get through TSA, then make it a part of getting through TSA — that you can’t get through TSA unless you show proper identification, your ticket and a vaccination card.”

However, such burdens on interstate travel clearly violate the U.S. Constitution’s “freedom of travel,” which has been widely recognized in the nation’s federal courts.

“In Kent v. Dulles, 357 U.S. 116 (1958), the United States Secretary of State had refused to issue a passport to an American citizen based on the suspicion that the plaintiff was going abroad to promote communism (personal restrictions/national security),” Wikipedia summarized. “Although the Court did not reach the question of constitutionality in this case, the Court, in an opinion by Justice William O. Douglas, held that the federal government may not restrict the right to travel without due process”:

The right to travel is a part of the ‘liberty’ of which the citizen cannot be deprived without due process of law under the Fifth Amendment. If that “liberty” is to be regulated, it must be pursuant to the law-making functions of the Congress. . . . . Freedom of movement across frontiers in either direction, and inside frontiers as well, was a part of our heritage. Travel abroad, like travel within the country, . . . may be as close to the heart of the individual as the choice of what he eats, or wears, or reads. Freedom of movement is basic in our scheme of values.

The Legal Information Institute also provides background on the “freedom of travel.”

The doctrine of the “right to travel” actually encompasses three separate rights, of which two have been notable for the uncertainty of their textual support. The first is the right of a citizen to move freely between states, a right venerable for its longevity, but still lacking a clear doctrinal basis. The second, expressly addressed by the first sentence of Article IV, provides a citizen of one state who is temporarily visiting another state the “Privileges and Immunities” of a citizen of the latter state. The third is the right of a new arrival to a state, who establishes citizenship in that state, to enjoy the same rights and benefits as other state citizens. This right is most often invoked in challenges to durational residency requirements, which require that persons reside in a state for a specified period of time before taking advantage of the benefits of that state’s citizenship.

Furthermore, vaccine passports would be an unnecessary and onerous burden that would fall disproportionately on minorities and underprivileged. The World Health Organizations has advised against ‘vaccine passports’:

“We have long been advising against using covid vaccination passports for international travel due to non-equitable availability and need for robust evidence for prevention of virus transmission post-vaccination. We have issued the latest interim guidance to all member states,” WHO chief scientist Dr. Soumya Swaminathan told Mint.

The United States, similarly, has disparities in demographical subpopulations’ willingness to take vaccines. As KFF recently noted in a report:

The CDC reports demographic characteristics, including race/ethnicity, of people receiving COVID-19 vaccinations at the national level. As of September 21, 2021, CDC reported that race/ethnicity was known for 59% of people who had received at least one dose of the vaccine. Among this group, nearly two thirds were White (60%), 10% were Black, 17% were Hispanic, 6% were Asian, 1% were American Indian or Alaska Native, and <1% were Native Hawaiian or Other Pacific Islander, while 5% reported multiple or other race.

The demographic breakdown can be vizualized in the chart below: 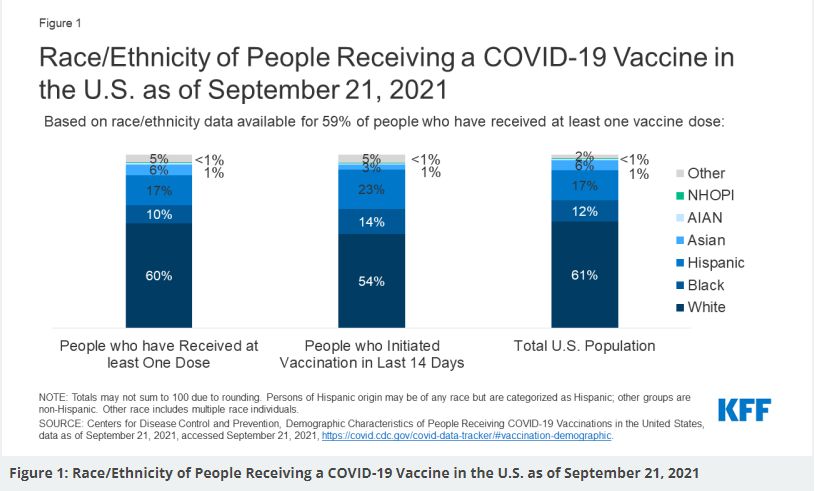 The Biden administration, nonetheless, has begun implementing travel barriers to those coming from abroad and for Americans on domestic flights that come increasingly close to ‘vaccine mandates.’ These new restrictions were noted in a September 21 article in the National Law Review:

The Biden administration will start requiring all adult travelers to provide proof of vaccination against COVID-19 and provide proof of a negative COVID-19 test taken within three days of boarding their flight to the United States. This change in policy is scheduled to go into effect in November 2021.

With respect to unvaccinated American citizens, foreign national children who cannot be vaccinated, or individuals who obtain an exemption to the vaccination requirement, they will be required to provide proof of a negative test within one day of departure and provide proof they have purchased a viral test to be taken after arrival. Limited exemptions to the vaccination requirement will be granted to children, vaccine trial participation, and those who can demonstrate an important reason for travel and lack of access to vaccination in a timely manner (e.g., refugees from conflict zones). Furthermore, the CDC will issue a contact tracing order requiring airlines to collect certain contact data for all international air travelers, and the administration confirmed the mask mandate will continue through Jan. 18, 2022.

Critically, Covid vaccines have themselves become a major driver of the Delta variant.

“[S]tate-level data shows that milder breakthrough cases that do not result in hospitalization are on the rise among the fully vaccinated as virus transmission increases and vaccine efficacy decreases,” Roll Call noted in mid-September. “And they’re expected to keep increasing.”

Then there is the issue of natural immunity, which the Biden administration refuses to acknowledge, but nevertheless possesses scientific evidence to support.

The CDC’s own figures estimate that at least 120 million Americans had been infected with Covid-19 by the end of May, thus possessing superior natural immunity. That figure can be projected to be at least 150 million currently, due to the Delta variant wave and the estimate that there are four cases for every one reported.

Furthermore, at least four times that U.S. government officials lied to the American people that there would not be federal vaccine mandates because they are unethical or otherwise not the role of government.

The Biden administration’s federal vaccine mandates are thus clearly unconstitutional, ineffective, and disruptive to Americans’ way of life. This is either an oversight among presumably intelligent people or entirely the point.

More Vaccines, More Covid: Why are Case Rates Exploding in Areas with High Levels of Vaccination?