John Earl Sullivan was paid thousands of dollars for his explosive footage of the January 6th Capitol riots by three major media companies, despite evidence of him having participated in a criminal act.

Sullivan, a self-style ‘revolutionary’ who had taken public positions supporting Antifa and Black Lives Matter, had captured footage of the Capitol riots deadly shooting of Trump supporter Ashli Babbitt. The unique footage was criminal evidence of public importance and a trove of it was made publicly available by John Earle Sullivan himself. A judge recently ruled that Sullivan was allowed to use social media during trial, an opportunity that he took advantage of recently.

As reported earlier at Becker News in an article that produced “receipts” of his media business transactions, based on a story broken by Politico:

Another invoice that was submitted by the defense attorney was one for ABC: Australian Broadcasting Corporation. The February 12, 2021 invoice submitted shows the amount: $2,500. 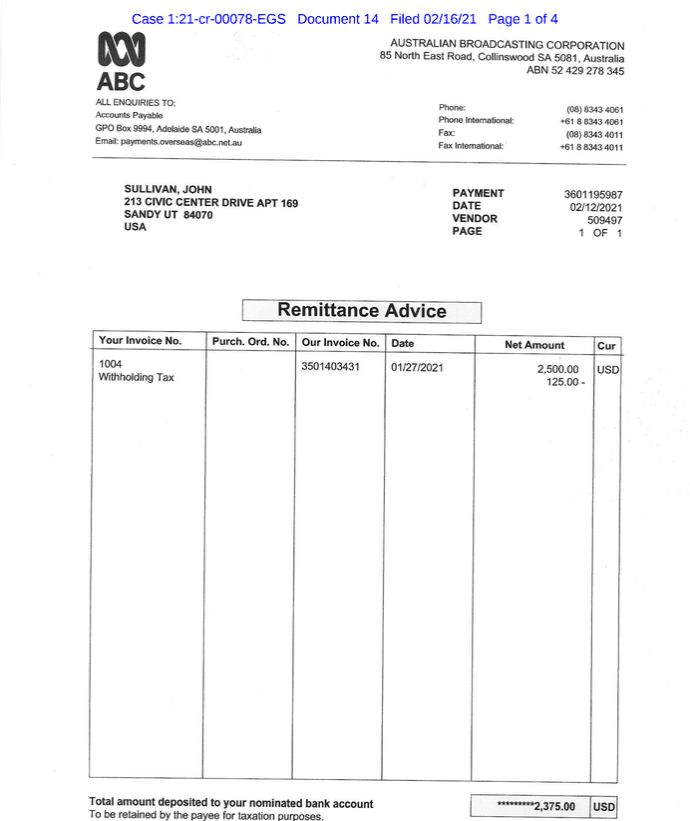 Nonetheless, CNN had both Sullivan and a freelance documentary photojournalist who was with him named Jade Sacker on the network during the heat of the capitol riots fallout and gave an uncritical interview.

The CNN transcript from January 6th, the day of the Capitol riot, shows no serious questioning of Sullivan by Anderson Cooper about his participation in the riots, despite his footage saying he had a “knife” and that had a number of times shouted phrases inciting the riot like “burn it down.” This was the conclusion of the CNN interview:

OK. Obviously, it’s very chaotic. I appreciate talking to you. We’re obviously trying to — I know there’s some other angles on this and we’re trying to learn more information about exactly what happened. I appreciate your time. Thank you very much.

Sullivan would be arrested on federal charges on January 14th, as reported by KSL TV, and “booked into the Tooele County Jail Wednesday afternoon.” The charges included “violent entry in a restricted building and disorderly conduct.”

The Rolling Stone effectively confessed the ethical problems arising from getting Sullivan’s account of the capitol riots without noting that he had no journalistic credentials, as he had previously claimed. It admitted this in an “update” to a January 13th piece:

UPDATE: John Sullivan was arrested and charged on January 14th, according to the Department of Justice, with “one count of knowingly entering or remaining in any restricted building or grounds without lawful authority, one count of violent entry and disorderly conduct on Capitol grounds, and one count of interfering with law enforcement engaged in the lawful performance of their official duties incident to and during the commission of civil disorder.” An FBI affidavit discounts Sullivan’s claim to be a journalist: “He has admitted,” the agent writes of Sullivan, “that he has no press credentials and the investigation has not revealed any connection between SULLIVAN and any journalistic organizations.”

It is important to note that John Earle Sullivan had a controversial history beyond merely advocating for revolution and insurgency. In July, Sullivan had been arrested in Utah after an earlier investigation of “rioting, making a threat of violence and criminal mischief.” As Deseret News reported:

Sullivan was also captured on video threatening to beat a woman in an SUV, according to the affidavit, and then kicking her door, leaving a dent.

Sullivan was seen with Jesse Taggart — the man charged with shooting the motorist — throughout the protest, the affidavit states.

He had also been at the scene of other capitol break-ins, such as the one at the Oregon state capitol in Portland in mid-December.

Sullivan’s verified social media accounts for Insurgence USA, as well as Jaydenx, also posted messages that strongly suggest that he wanted to participate in the capitol riots as far back as December 28th. Sullivan even used hashtag #Antifa.

One of Sullivan’s Instagram followers also shared a post calling for a Black Lives Matter counter-protest at the capitol. 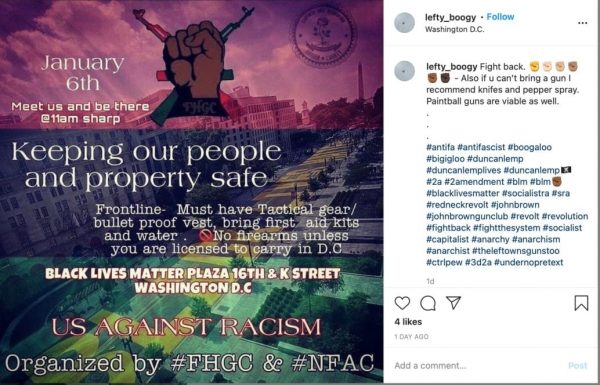 “Must have Tactical gear/ bullet proof vest, bring first aid kids and water. No firearms unless you are licensed to carry in D.C.”

The US Against Racism rally was purportedly co-organized by NFAC, an armed black separatist group, which has appeared at other rallies with extremist groups, which are often labeled by the media as “far-right.” An LA Times article on a Virginia capitol protest on January 18th defies the narrative that the extremist groups reported to have participated in the capitol riot are a monolithic of Trump supporters:

But a united cause quickly gave way to tensions. A dozen Boogaloo Bois, wearing signature Hawaiian shirts and patches revealing their alliance with Black Lives Matter, cheered as Black Panthers marched past. The Proud Boys taunted the Boogaloo Bois.

As revealed in an illuminating Time article, one reason that Antifa and other extremist groups did not appear to be visible at the capitol riots was there was coordination with major national left-wing organizations. Sullivan’s own videos show a coordinated planned assault on the capitol, replete with tactical gear like gas masks, helmets, bullet-proof vests and batons.

Most of those arrested and charged were from out-of-state, indicating advance planning and anticipation of violent conflict.

The Politico report also highlighted the role that Sullivan played in agitating the mob:

John Earle Sullivan had shouted numerous incendiary statements during the storming of the Capitol building, including “we about to burn this shit down.”

Sullivan posed as a Trump supporter to infiltrate the crowd.

Sullivan’s suspect behavior could be checked by anyone simply be searching through his trove of Youtube videos, where he has been a prolific poster. Just one day after the judge permitted him to use social media, someone uploaded two more videos to his account.

In his video, Sullivan was heard after Babbitt was shot yelling several times “she’s dead!” At the end of one of his videos, he coldly says about the incident, “I guess we’re all dying, so fuck it.”

Sullivan’s own videos even show he was closely tethered throughout the riot to major persons of interest. One of these was the infamous Q Anon/climate extremist Jake Angeli, who was later given free reign by Capitol Police to storm the Senate chambers. 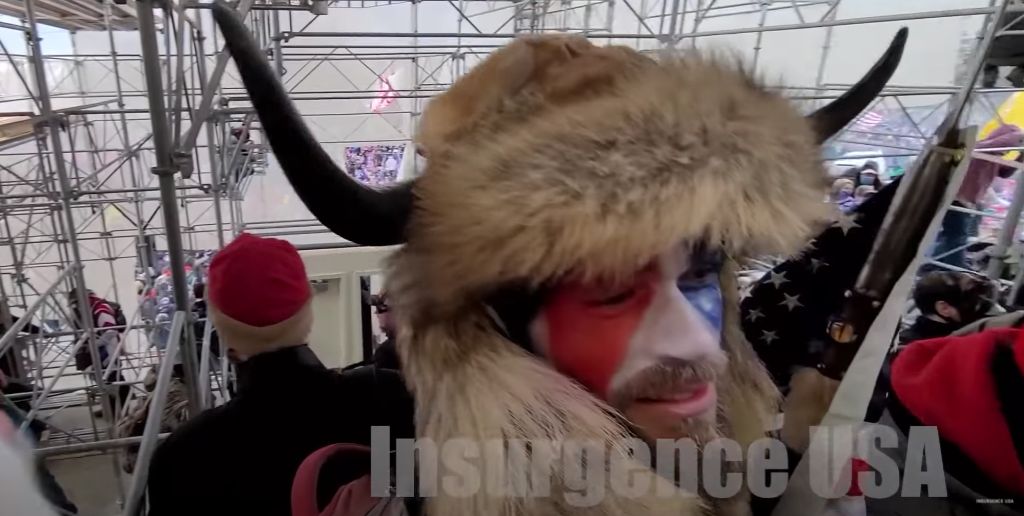 Another is Aaron Mostofsky, the son of Kings County Supreme Court Judge Shlomo Mostofsky. As reported by Courthouse News, Aaron Mostofsky was “arrested and charged with four counts including theft of government property and disorderly conduct.”

John Sullivan’s brother James, who had turned him into the federal investigators, pointed to his brother’s self-imagined affiliation with Antifa.

“He’ll go on video and say he’s Antifa and then when approached by somebody he’ll say he’s not,” James Sullivan said to a local CBS affiliate.

“He is not a reporter anyway,” James Sullivan added. “He started Insurgence TV and he just started going into like full radicalization, preaching and hosting rallies.”

Although Sullivan denied his brother’s several allegations, he himself admitted there is no “card” for voluntary membership in the Antifa cause.

“I don’t know where you get, there’s an organization named Antifa,” John Sullivan said. “Nor is there a membership card that is being passed out.”

Antifa is just an “idea” and not an organization. Joe Biden would wholeheartedly agree.