NSBA Reverses Itself in Blow to AG Garland: Apologizes for Letter Biden’s DOJ Weaponized to Target Parents as ‘Domestic Terrorists’

The National School Boards Association, an education alliance that sent a letter to the Justice Department over a purported concern that parents upset about Critical Race Theory may be potential “domestic terrorists,” has retracted its letter.

“As you know, there has been extensive media and other attention recently around our letter to President Biden regarding threats and acts of violence against school board members,” the NSBA’s letter to members began. “We wanted to write to you directly to address this matter.”

“On behalf of NSBA, we regret and apologize for the letter,” the letter said. “To be clear, the safety of school board members, other public school officials and educators, and students is our top priority, and there remains important work to be done on this issue.”

“However, there was no justification for some of the language included in the letter,” the NSBA continued. “We should have a better process in place to allow for consultation on a communication of this significance. We apologize also for the strain and stress this situation has caused you and your organizations.”

The NSBA announced it will be conducting a formal review of its processes and procedures, including the proceedings leading to the letter. You can read the letter, which was forwarded along by Rep. Chip Roy (R-TX), below: 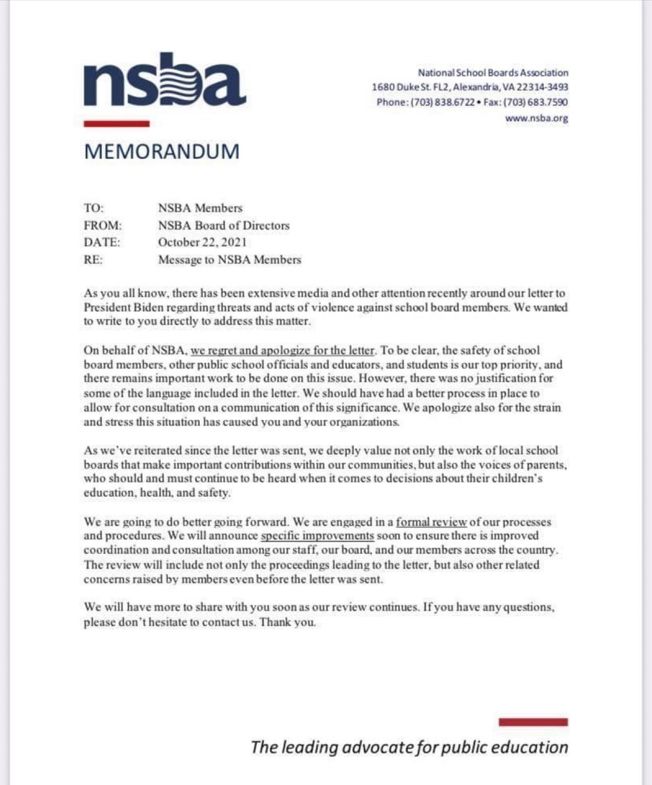 The NSBA letter was held up by Attorney General Merrick Garland in an October 4 memorandum that announced that the FBI would be dispersed to coordinate with local law enforcement on how to handle school board meetings with parents upset about the radical CRT agenda in schools.

“Citing an increase in harassment, intimidation and threats of violence against school board members, teachers and workers in our nation’s public schools, today Attorney General Merrick B. Garland directed the FBI and U.S. Attorneys’ Offices to meet in the next 30 days with federal, state, Tribal, territorial and local law enforcement leaders to discuss strategies for addressing this disturbing trend,” the memo said. “These sessions will open dedicated lines of communication for threat reporting, assessment and response by law enforcement.”

“According to the Attorney General’s memorandum, the Justice Department will launch a series of additional efforts in the coming days designed to address the rise in criminal conduct directed toward school personnel,” the press release continued. “Those efforts are expected to include the creation of a task force, consisting of representatives from the department’s Criminal Division, National Security Division, Civil Rights Division, the Executive Office for U.S. Attorneys, the FBI, the Community Relations Service and the Office of Justice Programs, to determine how federal enforcement tools can be used to prosecute these crimes, and ways to assist state, Tribal, territorial and local law enforcement where threats of violence may not constitute federal crimes.”

On Thursday, Attorney General Merrick Garland was confronted over the letter. Rep. Louis Gohmert (R-TX) grilled the attorney general over the evidence justifying his department’s announcement it would be unleashed the FBI to investigate parents at school board meetings.

“You said a moment ago you couldn’t imagine a parent being labeled a ‘domestic terrorist’,” Gohmert said at the hearing. “But parents all over the country believe that is exactly what you labeled them by your memo indicating you were going to get involved in board meetings, school board meetings, because of the threat of domestic terrorism.”

“So, if you can’t imagine a parent being labeled a ‘domestic terrorist,’ I would encourage you to redo your memo so it’s not so perceived as being so threatening to people concerned about their kid’s education,” he said.

The Democratic Party appears to be mortally afraid of the backlash to Critical Race Theory, as well as unscientific school mask mandates, which has been taking place at school board meetings across the country. At Merrick Garland’s appearance before the House Judiciary Committee on Thursday, the House GOP attempted to show a video of these parents and the Democrats effectively censored it with objections. Watch the video below:

As Becker News reported earlier, the NSBA’s letter to the Department of Justice had the secret backing of radical education groups. The NSBA was selected to issue the letter because it was not a radical “usual suspect” with an anti-parent track record. The letter went so far as to accuse the parents of ‘domestic terrorism and hate crimes.’

“The federal government is using its power to silence and intimidate American citizens,” Levin said. “They’re trying to chill free speech.” Mark Levin then read portions of the letter, which was posted online.

“In light of the Attorney General’s Memorandum of October 4, 2021, it appears the Department of Justice is committing the full weight of its federal law enforcement resources to prevent parents from exercising constitutionally-protected rights and privileges, for inappropriate partisan purposes,” the letter states.

The AFL claims that the Biden administration colluded with left-wing education groups to rationalize FBI targeting of parents.

“Key Biden Administration stakeholders, including the National Education Association, the American Federation of Teachers, and others, have combined to oppress, threaten, and intimidate parents to chill and prevent them from exercising the rights or privileges secured by the Constitution. To date these efforts, though extensive, have generally proven ineffectual.”

The AFL legal memo points to the citation of legal authorities in the Patriot Act to skirt jurisdictional issues over the FBI deploying for the purposes of blanket surveillance and intimidation of parents who oppose the radical Critical Race Theory curriculum. Becker News earlier reported that Attorney General Merrick Garland has a potential conflict of interest on Critical Race Theory because he has family ties to an education publisher that supplies CRT materials.

The NSBA’s retraction of its letter is a symbolic victory in the sense it creates a conundrum for the Biden administration. It acted upon a letter that had a poor evidentiary basis and hyperpartisan language that the issuing organization has now retracted. On Thursday, Jim Jordan took Garland to task for seizing upon such a letter to purportedly justify high-level FBI actions. You can watch the exchange below:

“In the first sentence of your memo. The very first sentence. You said: ‘In recent months, there has been a disturbing spike in harassment and intimidation and threats of violence’,” House Judiciary Committee Ranking Member Rep. Jim Jordan (R-OH) said. “When did you first review the data showing this so-called ‘disturbing uptick’?”

“So, I read the letter…” Garland responded. “And we have been seeing over time, threats…”

“Whoa, whoa, whoa,” Rep. Jordan interjected. “I didn’t ask you – so you read the letter? That’s your source?”

It now appears that the National School Boards Association won’t even stand behind those words. The Department of Justice, particularly Attorney General Merrick Garland, has some serious explaining to do about its partisan efforts to silence parents concerned about their children’s education across the nation.