Update: New York City Mayor Adams’ administration was able to convince an appeals court to put a stay on the lower court’s injunction.

New York City Mayor Eric Adams held out as long as he could. But a judge has struck down a city wide order for daycares and nurseries that required toddlers to be masked at all times.

Judge Ralph Porzio delivered the blow for toddlers and their parents by issuing an injunction that declared the order “arbitrary, capricious, and unreasonable,” the victorious counsel Michael Chessa tweeted.

We won! Judge Porzio just ruled in the favor of parental choice and democracy. He found the Toddler Mask Mandate to be arbitrary, capricious and unreasonable. Effective immediately, the policy is void and unenforceable.

“We won!” he declared. “Judge Porzio just ruled in the favor of parental choice and democracy. He found the Toddler Mask Mandate to be arbitrary, capricious and unreasonable. Effective immediately, the policy is void and unenforceable.”

WE WON THE COURT CASE.
Masks off the toddlers in NYC!! Thank you @metrolawyering !!!

“WE WON THE COURT CASE,” Nichols announced. “Masks off the toddlers in NYC!! Thank you [Metro Lawyering]!!!”

She attached a signed copy of the order. 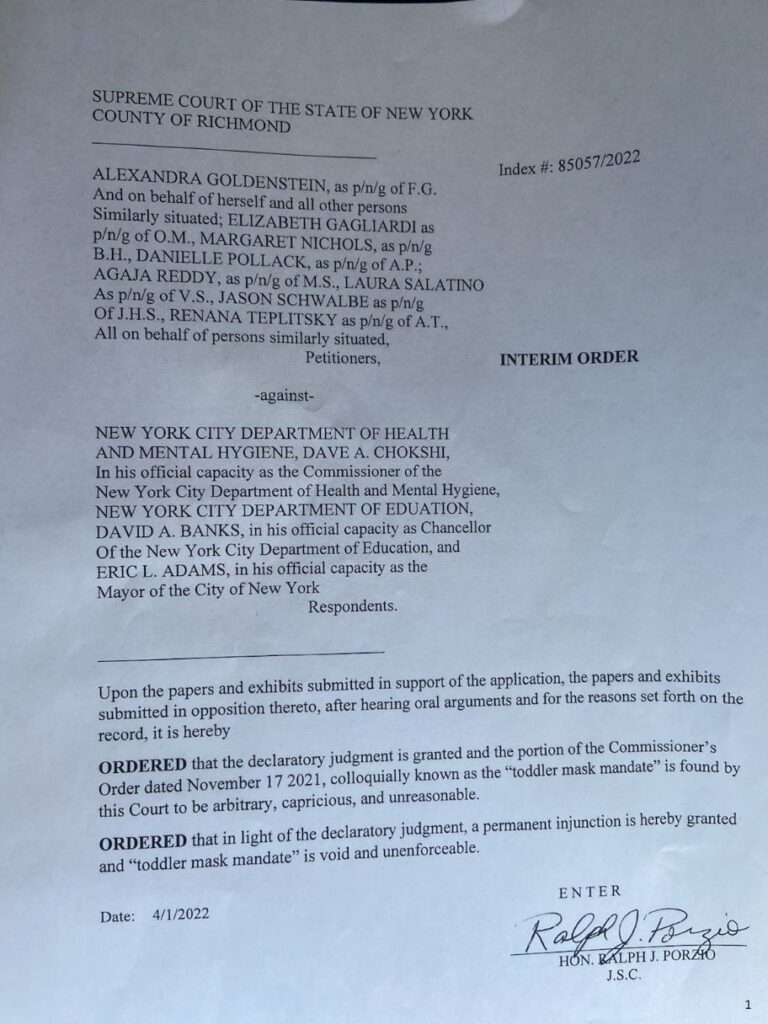 The “toddler mask mandate” is “void and unenforceable,” the judge stated.

Similarly to how New York Governor Kathy Hochul dropped the mask-or-vax mandate in February that a judge had issued an injunction against, New York City mayor Adams had attempted to get ahead of the “toddler mask mandate” being struck down.

“New York City Mayor Eric Adams is preparing to lift requirements that children under age 5 wear face masks in school,” My Northwest reported. Adams said in mid-March that “he will make masks optional for those in daycare and prekindergarten starting April 4 if case rates and the risk of the virus spreading remain low,” as the report noted.

“We want to see our babies’ faces,” Adams claimed.

Apparently, not bad enough to end the “arbitrary, capricious, and unreasonable” mandate, as the judge stated.

New York has maintained one of the worst Covid-19 response track records in the nation. Lockdowns, mask mandates, vaccine mandates, and vaccine passports did not stop the state from being one of the 15 worst states for age-adjusted Covid death rates. This was far below the free state of Florida, ranking 33rd in the nation, where toddlers were maskless and free throughout the Covid pandemic.