There won’t be a “we’re sorry” from the Covid-hysteria-pushing New York Times or the hordes of leftists that subjected a generation of kids to crippling anxiety and learning loss — all for a virus with a 99.9995% survival rate for schoolchildren.

All of the excuses have now been exposed. No, school mask mandates do not ‘stop the spread,’ as a recent study at ‘The Lancet’ succinctly showed. No, vaccinations and jabs do not slow transmission or ‘protect others.’ So any benefit of mass vaccinations for children with multiple jabs of the mRNA vaccines — for which there is no long-term safety data, and a proven risk of side effects — is extremely marginal, at best.

Never mind the science, the CDC and the teacher’s unions said. And now, our children are paying for it. Just like the critics said all along.

A new story in the New York Times gives the testimonials of 326 school counselors on the pandemic’s effect on children. The Times can’t even get the story straight from the get-go: It wasn’t the pandemic itself that harmed children, it was their trusted adults’ hysterical, unhinged, unscientific reaction that did the damage.

“American schoolchildren’s learning loss in the pandemic isn’t just in reading and math,” the Times said. “It’s also in social and emotional skills — those needed to make and keep friends; participate in group projects; and cope with frustration and other emotions.”

“In a survey of 362 school counselors nationwide by The New York Times in April, the counselors — licensed educators who teach these skills — described many students as frozen, socially and emotionally, at the age they were when the pandemic started,” the report noted.

“Something that we continuously come back to is that our ninth graders were sixth graders the last time they had a normative, uninterrupted school year,” said Jennifer Fine, a high school counselor in Chicago. “Developmentally, our students have skipped over crucial years of social and emotional development.”

“Nearly all the counselors, 94 percent, said their students were showing more signs of anxiety and depression than before the pandemic,” the Times continued. “Eighty-eight percent said students were having more trouble regulating their emotions. And almost three-quarters said they were having more difficulty solving conflicts with friends.”

The report aggregated the school counselors’ responses into a chart of children’s behaviors: 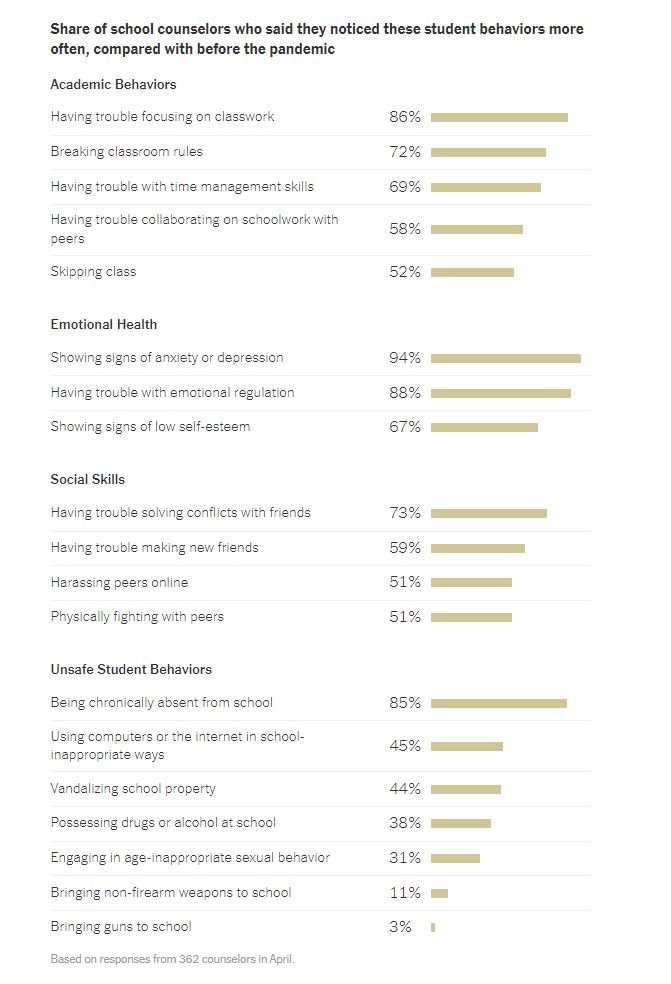 “Students are less bought in to school, less excited about life after high school,” an Austin, Texas educator said.

We all hope it was worth it to the fearful, childish liberals who ‘masked up’ their kids, deprived them of smiling faces for two years, and made them look at everyone in the world around them as potential virus-carriers. A generation of kids will now pay the price for this selfish, insecure, and short-sighted behavior.

The New York Times has now all-but-admitted it.