If you thought it was going to stop with kneeling during the National Anthem, you were wrong. The anti-patriotic stance of many U.S. athletes has become so brazen, that one competitor vowed to burn the American flag if the U.S. team reaches the podium.

Chelsea Wolfe is the transgender Olympic BMX competitor who made the incendiary remarks, as widely reported in the press.

“My goal is to win the Olympics so I can burn a US flag on the podium,” Wolfe reportedly wrote on a now-deleted March 25, 2020 Facebook post.  “This is what they focus on during a pandemic. Hurting trans children.” 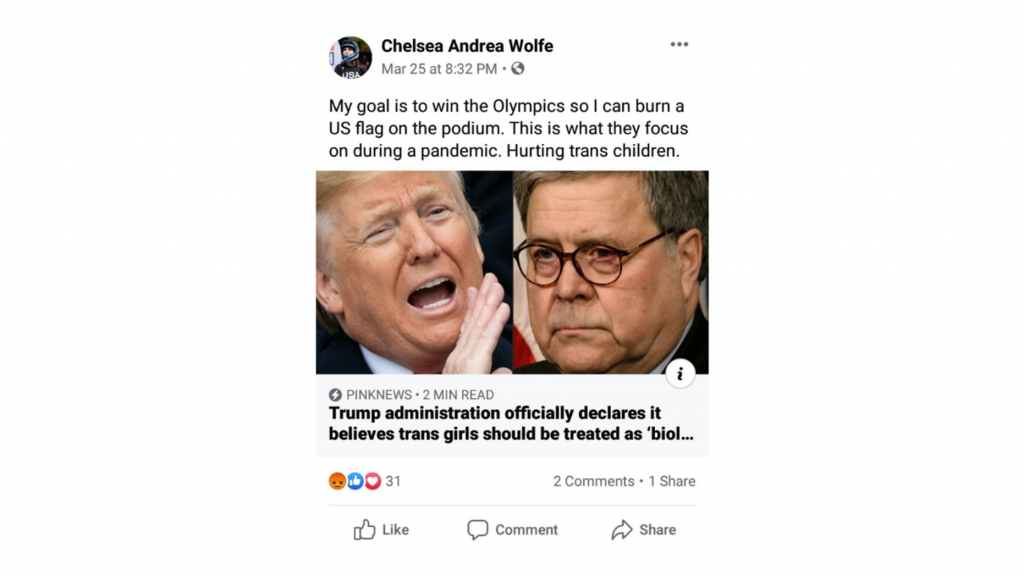 Wolfe’s remark was made in reference to an article about the Trump administration’s position that trans girls should be treated as biological males when it comes to school sports. The article referenced that the Trump DOJ was supporting “a lawsuit which aims to block trans girls at schools in Connecticut from competing as girls in interscholastic sports competitions.

The remarks accompany brewing controversy about so-called ‘trans girls’ participating in girls sports, but transgender Olympic athletes. It should not be missed that the trans-gender crossovers are nearly all going in the direction of transitioning biological males seeking to participate in biological women’s sports.

Representing @USABMX in the Olympics is transgender athlete Chelsea Wolfe, who has shown PRIDE for both the team’s sponsor and the USA by VOWING to burn the US flag if the American team reaches the podium. pic.twitter.com/OgVlP9jKD3

Laurel Hubbard recently became “the first openly transgender woman to individually qualify for the Olympics, even though the Games have had an inclusion policy for trans athletes since 2003,” USA Today notes. Hubbard will be competing for New Zealand’s weightlifting team.

There are other states seeking to follow suit. The Wisconsin legislature recently passed similar guidelines about boys and girls sports, but it almost certainly will be vetoed by Governor Tony Evers.

The culture wars have continued to escalate under the Biden administration. Critical race theory, the transgender issue, and other culture issues appear to be front burner for a presidency that is facing a border crisis, soaring inflation, rising gas prices, and the fallout of the COVID pandemic. It’s a major distraction for the American people and is thus the perfect complement for the Democratic Party’s radical agenda.