Former President Donald Trump has a popular Republican female candidate in mind for a potential running mate, should he decide to run in 2024.

A Bloomberg report led by the typically reliable Jennifer Jacobs cites two unnamed advisers close to the former president who point to Trump leaning towards picking a strong woman for the possible VP candidate job.

“Donald Trump is telling allies he’s strongly considering another run for president in 2024 — and close advisers want him to choose someone other than former Vice President Mike Pence for his ticket,” Bloomberg reported, attributing to sources “familiar with the discussions.”

“Trump’s advisers have discussed identifying a Black or female running mate for his next run,” the report continued, “and three of the people familiar with the matter said Pence likely won’t be on the ticket.” 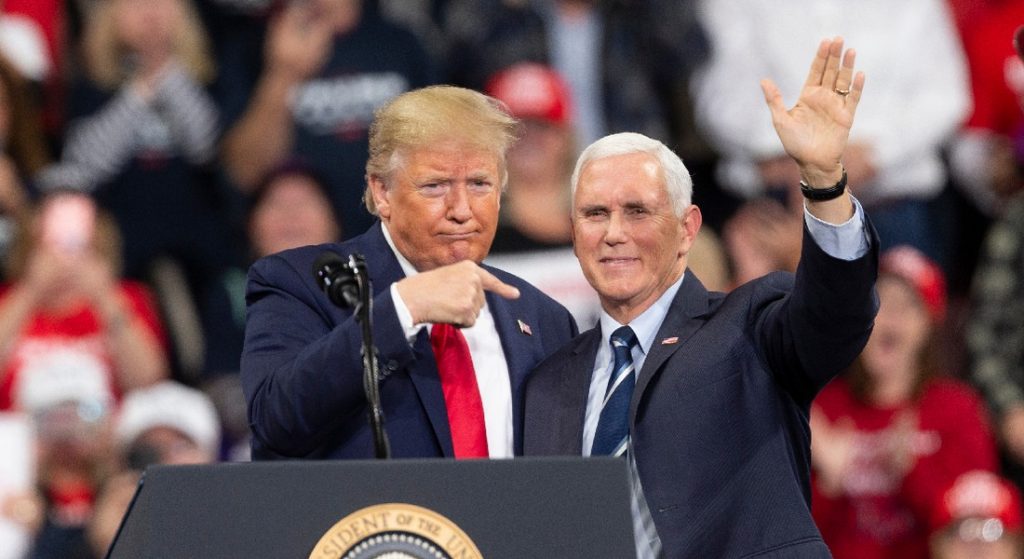 Donald Trump recently suggested during a CPAC speech that he is seriously mulling another presidential run.

“This alone should be reason enough for Democrats to suffer withering losses in the mid-terms and to lose the White House decisively four years from now,” Trump said. “Who knows? I may even decide to beat them for a third time.”

At another moment during the speech, he also teased a potential 2024 bid at the White House.

“With your help, we will take back the House. We will win the Senate,” he said. “And then, a Republican president will make a triumphant return to the White House. And I wonder who that will be.”

Many are also wondering who a vice presidential candidate “would be.”

Are there political considerations involved in the timing of this opinion piece? It is hard to say, but the nature of the piece does suggest that the former vice president wants to shore up his support among Trump supporters.

There are other tea leaves that the press is attempting to read about Donald Trump’s 2024 plans, including who he may pick as a vice presidential candidate, should someone be chosen for the job besides Pence.

The Bloomberg report vaguely suggests Trump’s recent endorsement of South Carolina Senator Tim Scott as a possible sign of a future veep candidate selection, because he is “the only Black Republican in the U.S. Senate.” But there is another name that has more clearly surfaced in the reported vice presidential candidacy talks.

“Two advisers have suggested Trump consider South Dakota Governor Kristi Noem,” the sources reportedly told Bloomberg. “Donald Trump Jr. and his girlfriend, Kimberly Guilfoyle, are hosting a fundraiser for Noem on Friday at Trump’s Mar-a-Lago resort and home in Palm Beach. The former president is planning to make an appearance, people familiar with the matter said.”

Governor Noem is a champion for many Trump supporters and Republicans for her defiance of intense pressure to implement unlawful coronavirus lockdowns in her state. While South Dakota ranks eighth in deaths per capita attributed to COVID-19, there are number of states with lockdowns that rank ahead of her state: New York, New Jersey, and Connecticut being among them.

Kristi Noem’s unwavering defense of Americans’ rights, when governors were caving left and right around the country, have nonetheless earned a lot of people’s respect and devotion. Noem would be somewhat of an unorthodox choice due to her relative youth at age 49 and considering that she became governor just recently, in 2019. However, former Alaska governor Sarah Palin was 44 years old when she became the Republican Party’s vice presidential candidate in 2008. Current Vice President Kamala Harris is 56 years old. Donald Trump would be 78 years old by the 2024 election, should he decide to run.

There are other formidable candidates in the mix that would excite Republicans and Trump supporters, including Florida Governor Ron DeSantis, who has done a remarkable job managing the pandemic in his state.

However, as exciting as such potential VP choices are to consider, one Trump senior adviser is trying to put a wet blanket on all the veepstakes talk: Jason Miller.

Miller said “no such conversations are happening” and Donald Trump ultimately “hasn’t made any decisions regarding a potential 2024 run.”

We are indeed a long way away from a potential Trump 2024 run. But if these reports are any indication, millions of Americans are already eagerly looking forward to moving beyond Biden.