One Tiny Fact Explodes Myth Trump ‘Knew’ Pence Was in Danger, But Attacked Him Anyway

It has been repeatedly breathlessly in the last 24 hours that Donald Trump ‘knew’ Mike Pence was in danger during the U.S. capitol uprising, but attacked him anyway.

The Washington Post did a story on the purported threat Trump had posed to Mike Pence:

Mounting evidence emerging as former president Donald Trump’s impeachment trial unfolds in the Senate this week indicates Trump may have been personally informed that Vice President Mike Pence was in physical danger during the Jan. 6 Capitol siege, just moments before denigrating him on Twitter.

The Huffington Post seems to have spearheaded this condemnation of Trump with its own story, “Trump’s Tweet Attacking Pence Came Right After Learning His VP’s Life Was In Danger.”

The narrative hinges on the revelation by a senator, Tommy Tuberville, that he reportedly told Donald Trump about Mike Pence’s evacuation from the Congress before the tweet was issued.

“He didn’t get a chance to say a whole lot because I said, ‘Mr. President, they just took the vice president out. I’ve got to go,’” Senator Tuberville said.

The Huffington Post wrote in a story about the timing of Tuberville’s message:

According to video footage from that day, Pence was removed from the Senate at 2:14 p.m. after rioters had broken into the Capitol, meaning that when Trump lashed out at Pence at 2:24 p.m., he already knew Pence’s life was in danger.

“Mike Pence didn’t have the courage to do what should have been done to protect our Country and our Constitution,” Trump wrote in his tweet.

Here is the problem: Trump hadn’t “lashed out” at Mike Pence.

Thus, the insinuation that Trump either coldly disregarded the danger to Pence, or even more ludicrously, that he deliberately fanned the flames to harm Mike Pence are utterly devoid of substantiation.

Furthermore, criticism of a political opponent for his lack of “courage” or on the procedural matters of the Electoral College is not “incitement” tantamount to issuing a political hit.

However, this is the picture the media are painting. On CNN last month, Ana Navarro even argued that Trump “literally, literally” wanted to have Pence killed.

Mike Pence had suffered a close call, according to reports. The Washington Post reported that Pence was evacuated “about one minute” before the rioters stepped foot reached the Senate landing. New surveillance video shows Pence being rushed out of the Congressional building:

Just last week, Scarborough had argued former Vice President Pence was “in fear for his life because of Donald J. Trump.”

These narratives have been fueled by a mainstream media trying to paint Donald Trump as a homicidal killer driven mad with a lust to retain power. However, these narratives so grotesquely distort reality with their leaps of imagination and concoctions of emotional manipulation, that one feels ridiculous even rebutting them.

In short, the notion that Donald Trump believed that he could cling to power by inciting an uprising of unarmed disparate groups is absurd on its face. There is no political mechanism for doing as such, and the Commander-in-Chief would not only known better, he would have had vastly more resources available for such a stunt than some horned Q Anon shaman or a bespectacled Democrat son-of-a-judge. 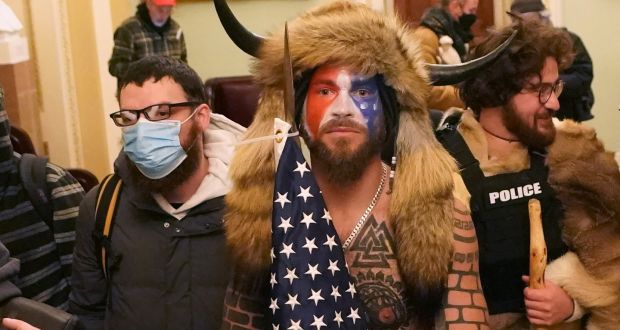 Trump would not even want to interrupt the electoral college objections, because they were his best chance of prevailing in his perfectly legal and constitutional election constestations, which the Democrats themselves did in 2000, 2004 and 2016. It was also his best chance of having Republicans air his view that the election was “stolen.”

And Trump did not direct the mob to attack Mike Pence, which is why the media are so desperately trying to unearth the Stalinesquely-scrubbed tweets that distort the picture to make it appear as if he had.

The mass media speculation is further fueled by reports that the capitol attack was in planning for weeks, if not months before Donald Trump’s speech.

The Democrats have argued that Trump must have been “monitoring” obscure far-right websites, or even the now-vaporized Parler, yet fail to show how this could be so. Instead, they just leave it to people’s imagination that it means he must have been coordinating it. A similar ruse is being pulled here with HuffPo’s report:

Videos shown by Democratic House members presenting their impeachment case document that rioters were aware of Trump’s tweet. Some had erected a gallows outside the Capitol. Others roamed the halls, chanting, “Hang Mike Pence.”

Whether or not anyone was aware of such a tweet calling Pence out for a lack of “courage,” the vice president had already been evacuated before it was even issued. The president would have known that as well.

Editor’s note: This article was corrected for the exact timeline.