Pelosi Forgets She is Against ‘Overturning’ State Certified Elections, But Mitch McConnell Gives Her a Harsh Reminder 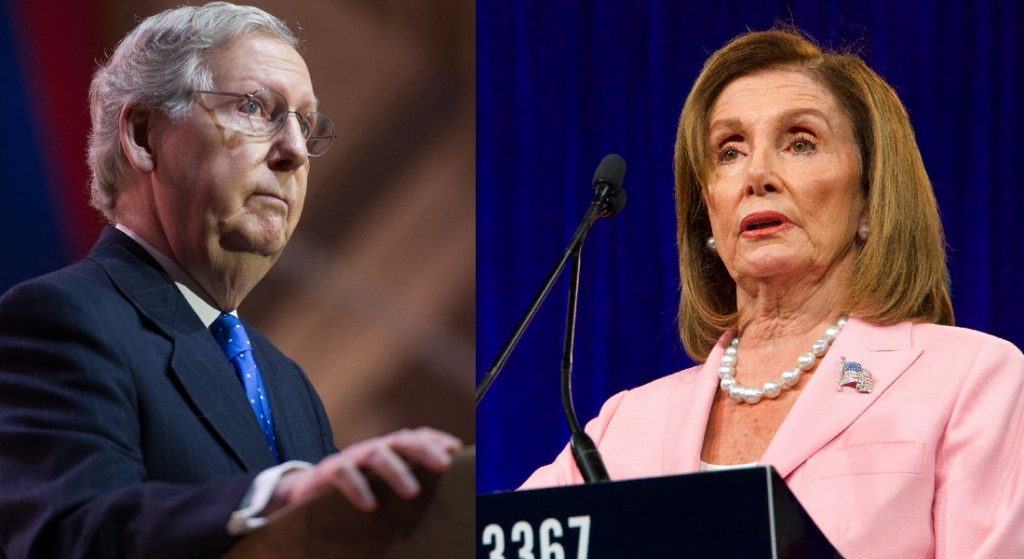 Speaker Pelosi is ‘over’ the January 6th Capitol Riots, which were allegedly caused by Republicans and Donald Trump objecting to state certified election results. The Senate impeachment trial led to another acquittal, and so Pelosi’s political games continue afoot.

The latest example out of the millions of examples available to anyone with a shred of intellectual curiosity that the Democrats are a completely unscrupulous, morally compromised gaggle of opportunists is Pelosi’s attempt to overturn the Iowa 2 election race.

“Right now as we speak, Speaker Pelosi and Washington Democrats are literally trying to overturn a state-certified election here in Congress. That’s exactly what they’re doing over in the House right now,” McConnell said.

“The outcome was certified. That’s the magic word, certified, that we heard over and over again in November and December. … the process played out in a way that every liberal in America spent November, December and January insisting was beyond question,” McConnell added.

“Miller-Meeks’s victory was certified by Iowa in late November and she was sworn in in early January,” the Hill reported. “But the Democratic candidate, Rita Hart, is challenging the results, arguing that there are 22 ballots that were tossed that should be counted. She is using language in the Constitution that allows Congress to “judge” its own elections to try to make her case in the House.”

On Sunday, Speaker was confronted on ABC’s “This Week with George Stephanopoulos” about the election she is trying to steal.

The Sunday morning interview turned to an Iowa House race that has been decided for the Republicans by a scant 6 votes.

“But the House Administration Committee began a process this week that could lead to unseating the Congresswoman. That has Republicans accusing you of hypocrisy, including Jim Jordan. He put out this tweet…”

Translation: You’re only allowed to object to an election if you’re a Democrat. https://t.co/TOOgIvEroL

“Speaker Pelosi says she’s open to unseating Republican Congresswoman Miller-Meeks. Translation: You’re only allowed to object to an election if you’re a Democrat.”

“Why investigate an election that was certified by the state?” Stephanopolous asked.

“Well, it’s six votes,” Pelosi responded. “There were six votes. And our candidate, Rita Hart, a Democratic candidate, asked for this process to begin.”

“What the committee did, the House Administration Committee, was very narrow,” Pelosi continued, “To take the process to the next step and see where it goes from there.”

“An election, six votes out of 400,000 votes cast,” she reiterated. “This is not unique. This has happened even when you were in the Capitol before, when races have been close one side or the other saying, ‘let’s take it to the House.’

“Because even Justice Scalia agreed that the House has the authority to seat members and therefore, we can count the votes,” Pelosi said. “Six votes out of 400,000.”

The Democrats never cease to amaze.