The Managing Director of the Penn Biden Center, a Biden adviser named Michael Carpenter, now finds himself embroiled in a national controversy that threatens to take down a president. But it isn’t his first time.

Carpenter is implicated in the high-profile scandal since classified documents from Biden’s vice presidency were stored at the Penn Biden Center on his watch. The scandal has led to the quick appointment of a Special Counsel by Attorney General Merrick Garland.

It turns out, Carpenter was also deeply enmeshed in the Trump impeachment hoax. But first, let us review how Michael Carpenter’s name has again become relevant.

The Penn Biden Center, a Washington, D.C.-based think tank, had quietly developed into one of the most influential foreign policy incubators in the United States. But its days of relative obscurity have now turned to ignominy. 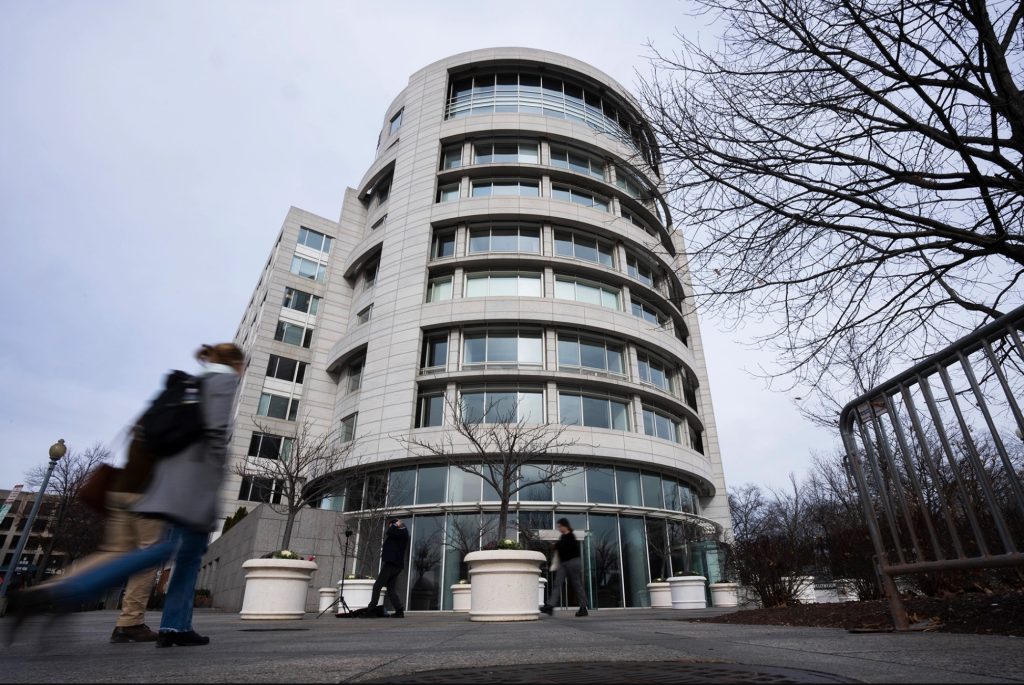 As reported by National Public Radio, Biden said the documents were “found in a box in a locked closet at the Penn Biden Center office in Washington, D.C.. They were turned over to the National Archives as soon as they were discovered by his personal attorneys on November 2, before the midterm elections.”

How and why those classified documents came to be at the Penn Biden Center, an unsecured non-governmental organization, as well as the political timing of their discovery has become a matter of public debate. The documents were reported in January to have been found on November 2 — only days before the midterm elections.

Adding to the oddity of the reports, the Department of Justice directed the Federal Bureau of Investigation not to bother supervising the classified documents being turned over to the authorities. Contrast this exceedingly “polite” treatment with that given to former President Donald Trump, whose Mar-a-Lago home was raided by FBI agents in a style reminiscent of banana-republics, complete with the seizure of numerous documents, including the president’s passports. There is even word the FBI agents ransacked Melania Trump’s underwear drawer.

The Penn Biden Center was opened in 2018, and drawing from the Hunter Biden laptop emails, it was envisaged as operating in a manner similar to the Clinton Global Initiative. It subsequently began raking in tens of millions of dollars in foreign cash; particularly, Chinese cash. There are “dark money” contributions of $250,000 and up.

Penn took in roughly $77 million in gifts and contracts from China between 2014 and 2020, The Daily Pennsylvanian previously reported. Absurdly, Joe Biden and Dr. Michael Carpenter, who would later run the Biden center, would co-author an op-ed warning about foreign “dark money” in 2018. That certainly takes nerve.

But just as notable as the shady operations of the Penn Biden Center is that it employed a trio of foreign policy heavy-hitters as its managing directors.

The Penn Biden Center’s first managing director was none other than current Secretary of State Antony Blinken. He was succeeded in this role by White House counselor Steven Richetti. After him followed a managing director who gained prominence during the first Trump impeachment hearings: The above-mentioned Michael Carpenter.

It is to Carpenter that we now turn. He is a former Director of the National Security Council, and is currently the U.S. representative to the Organization for Security and Cooperation in Europe (OSCE). Although he got in at the ground floor as a Senior Director in 2018, he became the Managing Director of the Penn Biden Center in 2019. He was confirmed as the U.S representative in November 2021.

Dr. Carpenter, readers might remember, was flanked to Biden’s right at the Council of Foreign Relations panel in 2018 where Biden infamously announced that he threatened to withhold aid from Ukraine if it did not fire the prosecutor charged with investigating the Ukrainian gas company Burisma. 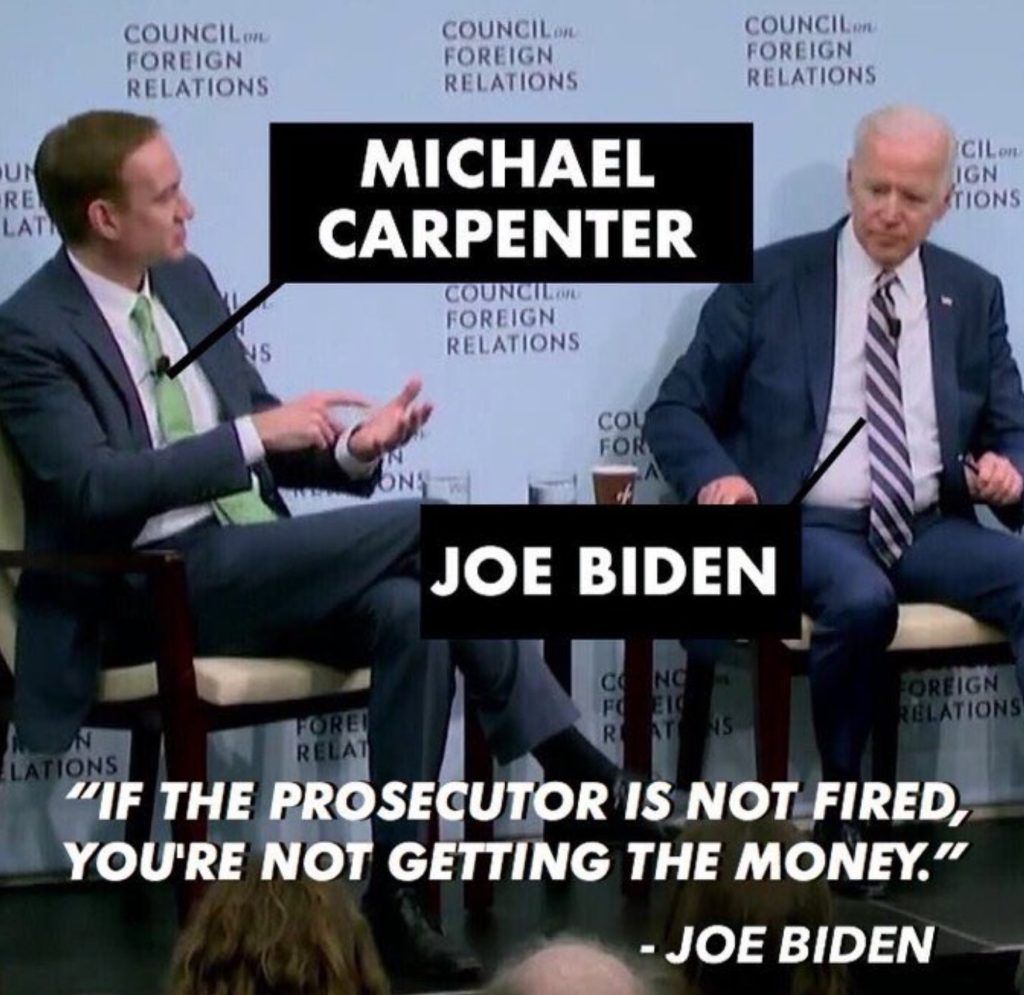 Burisma, of course, just so happened to be employing his son Hunter Biden on its Board of Directors for the hefty stipend of over $80,000 a month. Of course, we are to dismiss the obvious ‘quid pro quo’ implicated in the former vice president’s demands.

Such a ‘quid pro quo’ is a normal part of diplomacy (“sticks and carrots”), but it would become a scare word during the Trump impeachment hoax. If you recall, a “whistleblower” named Eric Ciaramella had relayed second-hand information that Trump was attaching aid to Ukraine to assurances from then-president Volodymyr Zelensky that Biden’s demand for the prosecutor be fired get properly investigated.

That was it. The Democrats, desperate to wound and potentially rid the U.S. government of their nemesis Donald Trump, nonetheless launched theatrical impeachment hearings over the matter.

The unnamed star at the center of the impeachment theater was the “whistleblower,” believed by investigators to be pictured with Dr. Michael Carpenter below. 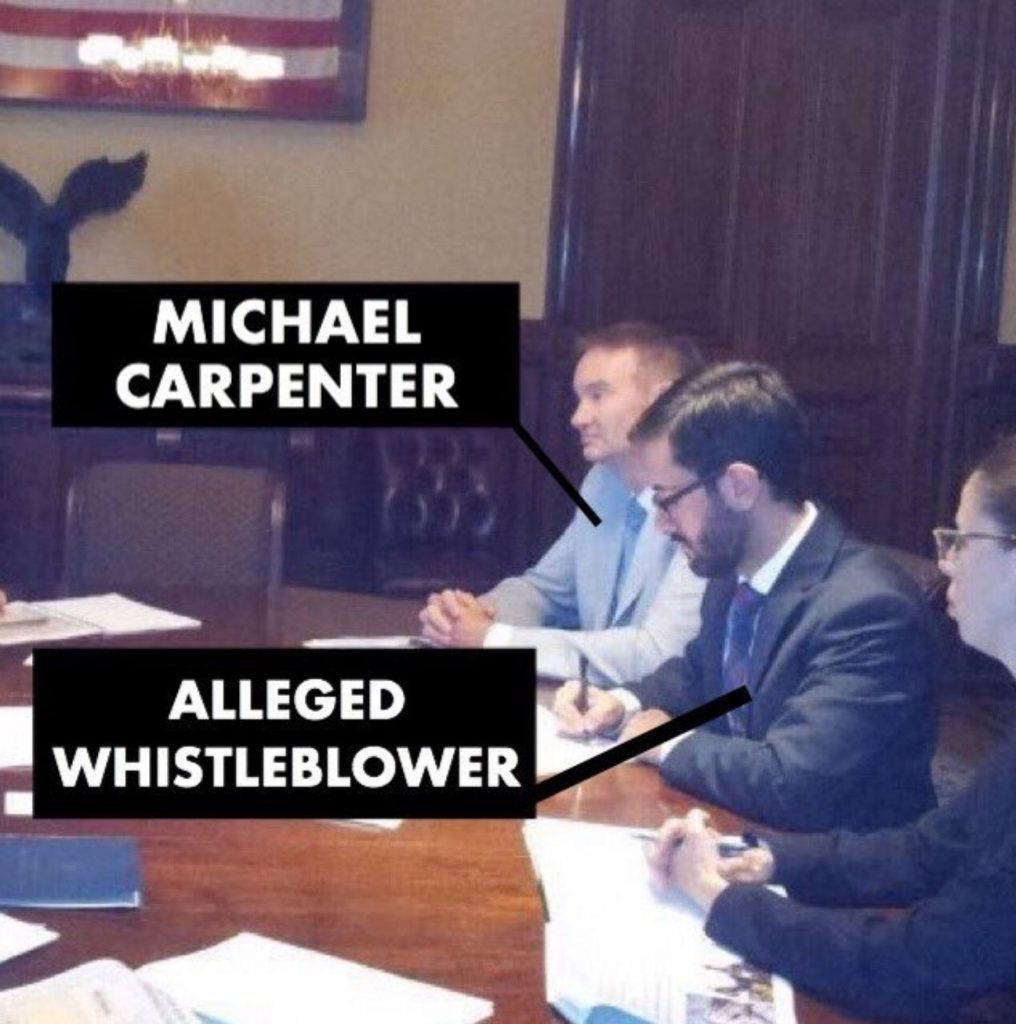 Carpenter, interestingly, is a Biden adviser with expertise on Russia and Ukraine, as well as on weapons trafficking, according to his bio at the Atlantic Council. 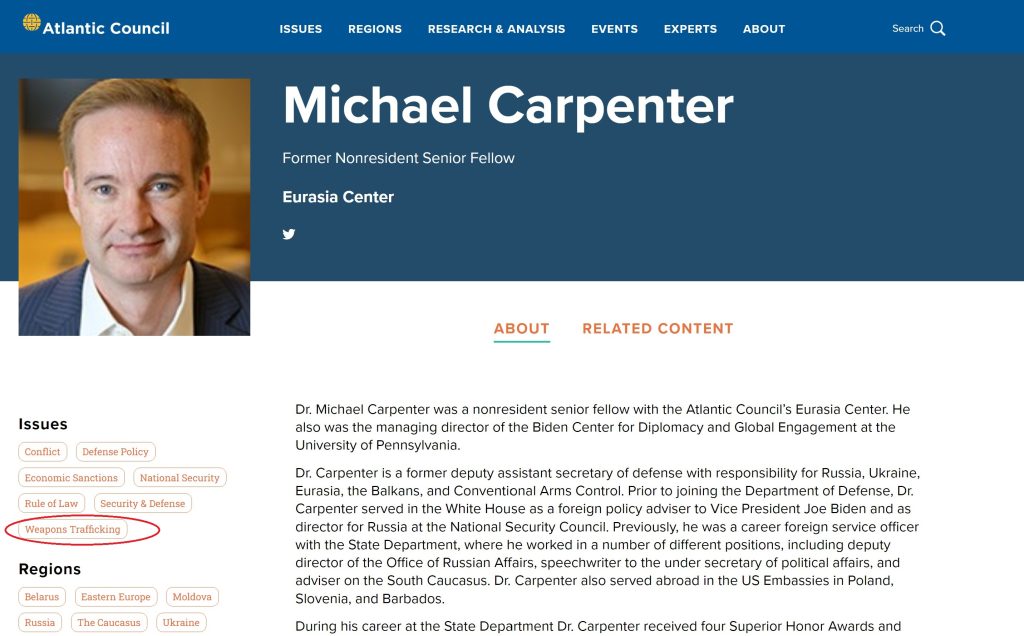 “Among the classified documents from Joe Biden’s time as vice president discovered in a private office last fall are US intelligence memos and briefing materials that covered topics including Ukraine, Iran and the United Kingdom,” a source told CNN.

“A total of 10 documents with classification markings were found last year in Biden’s private academic office and they were dated between 2013 and 2016,” the report added.

Joe Biden in 2016 had pressured the Ukrainian government to fire the prosecutor Viktor Shokin, who was investigating Burisma’s leadership for corruption.

A series of documents from the Obama-Biden administration showed that representatives for Burisma Holdings sought a meeting with the State Department in February 2016 to discuss the corruption allegations.

Burisma’s representatives invoked the former vice president’s youngest son, Hunter, in order to try to get a meeting with the State Department. The FOIA documents obtained in a lawsuit by John Solomon did not indicate if the meeting ever took place.

On one of the last days of his term as vice president, Joe Biden traveled to Kyiv. FOIA documents hosted at the U.S. State Department show one possible explanation why.

Viktor Nebozhenko, a political scientist, was cited in an email from then Foreign Service Institute director Karen Robblee to former U.S. Ambassador to Ukraine Marie Yovanovitch speculating on the timing of Biden’s visit and what it could possibly mean.

“Donald Trump said that he will carry out an audit of investments in security and democracy in Ukraine,” Nebozhenko said. “For 8 years the US Administration has turned a blind eye to our corruption and gave a lot of money through the IMF and various funds. And all this has disappeared somewhere. Trump, as the new director of the company under the name of the United States, wants to know where that money went.”

Donald Trump thinks he knows exactly what is in Biden’s classified documents stash and that it was covered up long before the midterm elections.

“I think they knew long before November 2,” Trump told John Solomon on his podcast from January 11.

Trump added, “I think he knew probably right from the beginning and I think a lot of it had to do with Ukraine, because that was the papers he kept. And no, I think they knew about this for a long time and they didn’t do anything about it.”

When asked how documents from Biden’s vice presidency might “change the equation” in regards to Special Counsel Jack Smith’s probe into the Mar-a-Lago documents, Trump said, “Well, I think it totally changes that.”

“I was perfect under the Presidential Records Act,” Trump added. “I did absolutely nothing wrong.”

The FBI agents had seized over 11,000 documents and photographs without classified markings from Trump’s resort, along with about 100 documents marked ‘classified’ or ‘top secret.’ Trump has argued that he declassified these materials when he left office.

Trump argued that the FBI should raid Biden’s properties, as well as those belonging to his son Hunter Biden.

“What about all of these places that he’s got?” Trump asked. “What about his house? What about Hunter’s house? You know, who’s going to go in there like they did with me? Who’s gonna do that?”