Planned America First Rally Was Just Canceled by the City of Anaheim, California

A planned America First rally was just canceled in the State of California in the latest attack on free speech in the country. 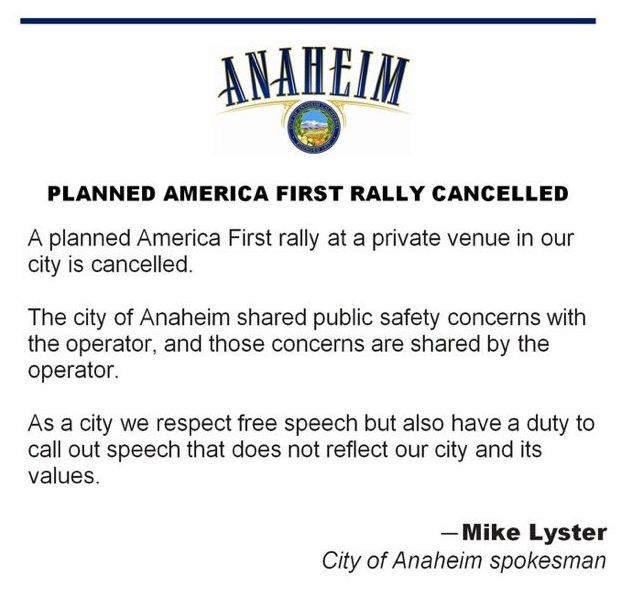 “As a city we respect free speech but also have a duty to call out speech that does not reflect our city and its values,” Anaheim added in its nonsensical statement.

“The event had already been canceled at two previous venues, in Laguna Hills and Riverside,” NBC Los Angeles reported. “It was scheduled to take place at the Anaheim Event Center at 2232 S. Harbor Blvd.”

“The rally was initially planned for the Pacific Hills Banquet & Event Center in Laguna Hills, but canceled there because ‘we just want to stay clear of that,’ general manager Javad Mirtavoosi told the OC Register last week,” the report noted.

“It was then shifted to the Riverside Convention Center, but officials with the Raincross Hospitality Corp., which manages and operates the city-owned center under contract with the city, told city officials Friday night the event would not take place,” the report added.

“I recognize this was a divisive issue in our community, and I am glad it has been resolved,” Anaheim Mayor Patricia Lock Dawson said. “I commend Raincross Hospitality Corp. for this decision.”

It appears, once again, that the American left may be working with private companies to censor free speech in America.

Constitutional attorneys are already taking a look at the case.

“I’m by the phone for any violation of the First Amendment!” The Liberty Center’s Harmeet Dhillon reacted.

OMG the venue for today’s #AmericaFirst rally w myself and @mtgreenee is going to be even better than we imagined.

The cancellations show how afraid the Left is of our message.

But they can’t cancel our movement!

This is HAPPENING in SoCal!

“OMG the venue for today’s #AmericaFirst rally w myself and @mtgreenee is going to be even better than we imagined,” Gaetz said. “The cancellations show how afraid the Left is of our message. But they can’t cancel our movement! This is HAPPENING in SoCal!”

Matt Gaetz and Marjorie Taylor Greene subsequently held a Free Speech Conference, which was broadcast by Right Side Broadcasting Network.

“Free Speech Peaceful Protest in Riverside, California!” Greene tweeted. “We will not be canceled and we will not back down!”