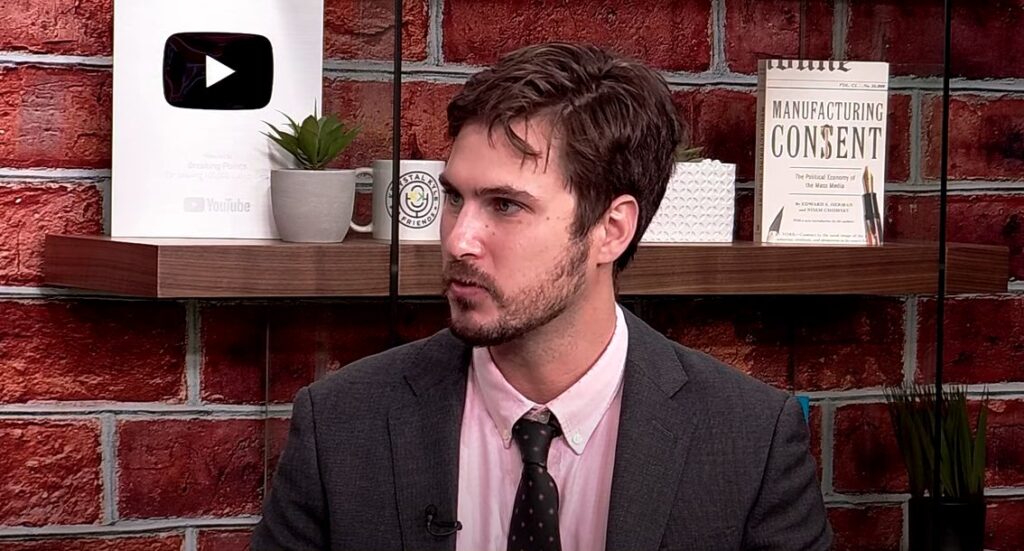 Politico has caught up with the New York Post and conservative outlets and  is confirming that the Hunter Biden laptop is “real.” But one Politico reporter is going even further by shining a light on underreported material.

Ben Shreckinger, author of “The Bidens,” sat down with podcasters at The Hill to discuss how the media has responded to his reporting. He called it a “massive global controversy” and dug into what is so disturbing about the Hunter Biden laptop, and more importantly, emails that implicate President Joe Biden in deep corruption.

“Most importantly, I spoke to someone who for a time had some independent access to Hunter Biden’s e-mails,” he said. “They say he did receive an e-mail from a Ukrainian businessman thanking him for the chance to meet his father and that he did receive an e-mail from a business partner laying out the proposed equity structure for a venture, it was some Chinese business executives that included the line ‘10 held by each for The Big Guy.’”

“Those were the lines that were sort of at the center of a controversy last October, the e-mails that were initially published by ‘The New York Post,'” he said. “And I was also able to corroborate some other e-mails that didn’t really make the news. That just sort of showed that there’s other genuine material here. I spoke to a couple of people who corresponded with Hunter Biden in 2018 and 2019 and they said, ‘Yep, those messages are messages I did exchange with him.’”

“And then I obtained some e-mails from a Swedish government agency,” he went on. “For a while, Hunter Biden had an office in the complex on K Street that houses the Swedish embassy. So, the Swedish government was essentially his landlord. They released to me a half dozen or a dozen e-mail exchanges, and those match emails and the cash. So what I can say is that some of this material, at least, is genuine.”

Politico finally did its journalistic due diligence on the Hunter Biden laptop story. But for millions of voters that were seeking accurate information before the 2020 election, it is another case of too little, too late. In Politico Playbook this week, the ugly truth finally came out:

Ben Schreckinger’s “The Bidens: Inside the First Family’s Fifty-Year Rise to Power,” out today, finds evidence that some of the purported HUNTER BIDEN laptop material is genuine, including two emails at the center of last October’s controversy.

A person who had independent access to Hunter Biden’s emails confirmed he did receive a 2015 email from a Ukrainian businessman thanking him for the chance to meet Joe Biden. The same goes for a 2017 email in which a proposed equity breakdown of a venture with Chinese energy executives includes the line, “10 held by H for the big guy?” (This person recalled seeing both emails, but was not in a position to compare the leaked emails word-for-word to the originals.)

MORE: Emails released by a Swedish government agency also match emails in the leaked cache, and two people who corresponded with Hunter Biden confirmed emails from the cache were genuine.

While the leak contains genuine files, it remains possible that fake material has been slipped in.

BACKGROUND: A former Hunter Biden business partner, TONY BOBULINSKI, said last year the “10 Held by H” email was genuine and referred to plans for Hunter to hold equity in the venture — which did not get off the ground — on behalf of his father. Biden’s campaign said he never considered going into business with his family.

This is quite the contrast with a story that Politico ran on October 2020, just weeks before the presidential election. It was authored by Natasha Bertrand. Read it and weep:

More than 50 former senior intelligence officials have signed on to a letter outlining their belief that the recent disclosure of emails allegedly belonging to Joe Biden’s son “has all the classic earmarks of a Russian information operation.”

The letter, signed on Monday, centers around a batch of documents released by the New York Post last week that purport to tie the Democratic nominee to his son Hunter’s business dealings. Under the banner headline “Biden Secret E-mails,” the Post reported it was given a copy of Hunter Biden’s laptop hard drive by President Donald Trump’s personal lawyer Rudy Giuliani, who said he got it from a Mac shop owner in Delaware who also alerted the FBI.

While the letter’s signatories presented no new evidence, they said their national security experience had made them “deeply suspicious that the Russian government played a significant role in this case” and cited several elements of the story that suggested the Kremlin’s hand at work.

The New York Post would nonetheless be stifled by social media giants, such as Facebook and Twitter. The ramifications of the unprecedented media censorship of the nation’s oldest publication is that millions of voters were prevented from a fully informed vote ahead of heading to the ballot box. ‘Election interference,’ indeed.

In November 2020, just a week after the election, the Washington Examiner’s Paul Bedard noted that the media’s suppression of the Hunter Biden story had a negative impact on Donald Trump’s performance at the polls:

In a new survey, 4.6% of Biden’s voters said they would not have selected him had they been aware of his son’s China money affair.

According to a McLaughlin & Associates poll done for the Media Research Center, 36% of Biden voters were not aware of the scandal. And 13% of those said they would not have voted for Biden had they known.

“Such a shift away from Biden would have meant President Trump would have won the election with 289 electoral votes,” said the polling outfit, which did work for the Trump campaign in 2016 and this year.

The social media giants knew what they were doing, and cable news companies were right there with them running interference for the Democratic Party’s presidential candidate. Project Veritas in December 2020 captured CNN executives on audio discussing how they were spiking the Hunter Biden laptop story:

The U.S. attorney working on the Hunter Biden case, a prosecutor known for taking on powerful Delaware political figures, also made moves to ensure case developments stayed out of the 2020 president election campaign cycle.

David Weiss, a veteran U.S. attorney, “kept his investigation into Biden’s son out of the 2020 campaign,” according to an earlier report by Politico.

Federal officials advising the prosecutor Weiss told him to “avoid taking any actions that could alert the public to the existence of the case in the middle of a presidential election,” the report noted.

The FEC decided that Twitter’s suppression of the story was “undertaken for a valid commercial reason, not a political purpose” and “followed existing policies related to hacked materials.”

However, not only were the Hunter Biden files not “hacked” (they were on the laptop that he left at a Delaware repair shop), Twitter took no similar action numerous other times there was hacked information on its platform, presumably because the story damaged Donald Trump.

A forensic audit was conducted by the Daily Mail and its results were published in April 2021. It showed the “Hunter Biden laptop” was indeed Hunter Biden’s.

The Daily Mail has authenticated that the “103,000 text messages, 154,000 emails, more than 2,000 photos and dozens of videos” belong to the president’s son. The laptop is “brimming with evidence of apparent criminal activity by Hunter and his associates including drug trafficking and prostitution,” the Daily Mail reports.

As the Wall Street Journal recently noted, the Hunter Biden story is not really about Hunter Biden. It is about Joe Biden. The news media knew that before the 2020 election: That is precisely why they buried the story.